Nature as the Word and Beauty of God: The passion of Jesuit-ecologist John McCarthy

August 11, 2015 – How often have you heard the claim that faith and science are incompatible or strictly opposed? Too often religion seems to ‘get a bad rap’ these days.

Well, Fr. John McCarthy, Jesuit priest and ecologist, doesn’t buy this opposition. In fact, he’s written extensively on how faith and science are not just compatible, but complementary.

“All creation is of God and has its own integrity and intrinsic value,” he says, adding, “Science is essential but never sufficient to address ecological issues in the long run.”

His latest musings on the topic are given in his new book Do Monkeys Go to Heaven? Finding God in All Creation.

Novalis, the book’s publisher, summarizes the book this way: “Removing the so-often-made distinction between secular and sacred, Fr. McCarthy takes us on a journey and ponders nature’s revelation of God and God’s boundless love of us, showing us the need to be both scientific and spiritual.”

Monkeys has been selling briskly and was recently awarded third place in the Faith and Science Category at the 2015 Catholic Press Association (CPA) awards for the United States and Canada. 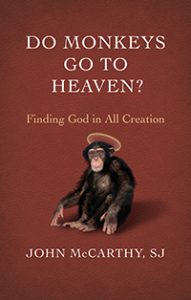 However make no mistake, Fr. McCarthy is no recreational dabbler when it comes to evolution and God. His earlier studies and work have explored the profound link between nature and the mystery of Divine Love.

His extensive ecological work has included writing and speaking on the relationship between theology and ecology; researching the biodiversity of lichens, (a combination of a fungus and an algae); and working to protect the natural heritage of his beloved Newfoundland and Labrador.

In 2002, he was the recipient of the Canadian Environment Awards Gold Medal in the Lands and Forests Category for his work in boreal forest conservation in Newfoundland.

Besides his ecological work, Fr. McCarthy has served as chaplain and faculty member at St. Mark’s College, UBC, and is currently the Socius (assistant) to the Provincial of the Jesuits in English Canada and responsible for the training of young Jesuits.

He is grateful that the Jesuits have always supported and encouraged his research, writing and speaking on all things related to nature. 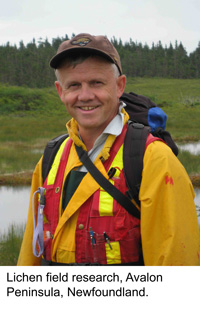 “My vocation to science and to nature and my Jesuit vocation have come together as one and the same,” says Fr. McCarthy. “Nature speaks to us of God and of God’s love for us.  I am blessed in my efforts to speak of nature as the creation of God.”

Born in 1958, he grew up surrounded by the beauty of Newfoundland. Fr. McCarthy speaks of his passion for nature: “At an early age I was seduced by nature; tempted by rock, wind and water, invited by barrens, bogs and forests, infatuated by the wilderness of my native Newfoundland.  Mesmerized, obsessed, blinded, I fell for nature.”

He joined the Society of Jesus in 1983 and was ordained a priest in 1994. He studied philosophy at Gonzaga University in Spokane, Washington.  During his theology studies in Belgium and Canada he focused on the question, “Does matter really matter to Christianity?”

When time permits, Fr. McCarthy may be found in the wilds of Newfoundland and Labrador, or hiking and snowshoeing in the mountains of British Columbia, or even collecting lichens for his on-going research.

Science, faith are a perfect fit in Jesuit’s life
Jesuits have a long tradition in science and there’s a good reason for that, says Jesuit lichenologist and ecologist Fr. John McCarthy.
Story
Jesuit makes a name for himself studying lichen
For gymnasts it might be a twisting tumble, for astrologers a star, for politicians a sandwich. But for an style='background:yellow;'>Jesuitan> ecologist Fr. John McCarthy that ultimate accolade — confirmation of a lifetime of scientific research — is to have a lichen named after him.
Story
Canadian Jesuit Discovers New Species of Lichen
Fr. McCarthy, who has devoted decades to ecological research, now has a species of lichen named after himself.
Story