Science, faith are a perfect fit in Jesuit’s life

Jesuits have a long tradition in science and there’s a good reason for that, says Jesuit lichenologist and ecologist Fr. John McCarthy.

“I still feel there’s a real need for Jesuits and just people of faith in science,” McCarthy told a gathering at Toronto’s Regis College March 21.

“To be active witnesses to the beauty of science.” 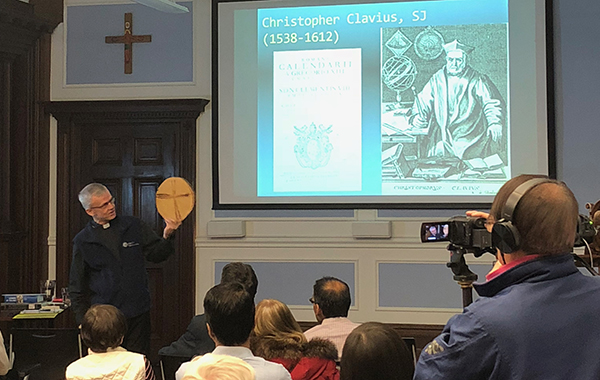 From the first use of the decimal point to the discovery of Peking Man; from the first medical use of quinine to cataloguing 933 species of ants Jesuits have spent the last 478 years advancing human knowledge.

Popular notions that either the Church or religion in general are opposed to science are a mostly 19th-century misconception born out of the rather crude philosophy of logical positivism, according to McCarthy. But the error persists in our time in the form of empty debates over the aggressively anti-religious views of so-called “new atheists” such as Richard Dawkins.

Dawkins made the front cover of Time magazine in November of 2006 by debating the Christian head of the Human Genome Project, Francis Collins, under a headline that read “God vs. Science.”

“That’s just absurd,” was McCarthy’s assessment of the Time article. 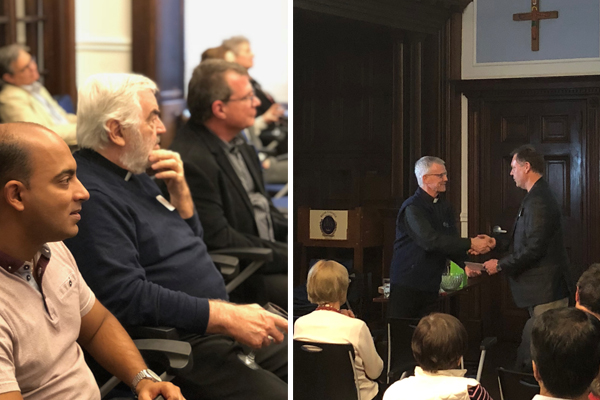 McCarthy himself has had a distinguished career in science while also acting as a campus chaplain and parish priest at the University of British Columbia and helping to lead the Jesuits in English Canada as socius, or chief assistant, to the Jesuit provincial superior. In a back room of the Jesuit curia in Toronto, McCarthy keeps a couple of high-powered microscopes and related scientific equipment.

Scientific colleagues named one species of lichens, Acarospora maccarthyi, after him.

McCarthy has discovered and catalogued several species of lichens, including one discovered at the Ignatius Jesuit Centre in Guelph, Ont., which he named Cladonia ignatii. 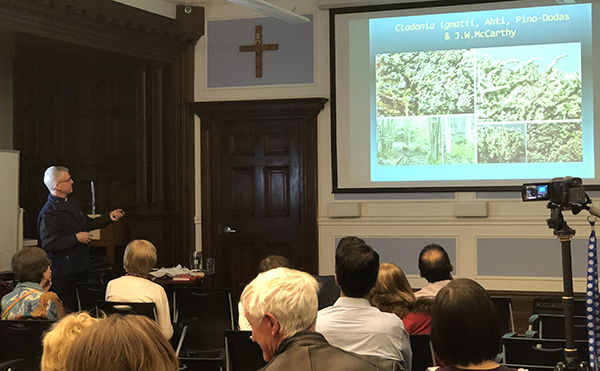 The author of two popular books about faith and science — Do Monkey’s Go To Heaven? and Do Monkey’s Go To Heaven 2.0? —McCarthy concedes Jesuits are not as prominent in science as they were a couple of generations ago. That’s largely a matter of overall numbers, with the Church’s largest male order declining from about 36,000 members in 1965 to fewer than 16,000 today, he said.

Video: [ Fountain of Love and Life ]

Nature as the Word and Beauty of God: The passion of Jesuit-ecologist John McCarthy
How often have you heard the claim that faith and science are incompatible or strictly opposed? Too often religion seems to ‘get a bad rap’ these days. Well, Fr. John McCarthy, Jesuit priest and ecologist, doesn’t buy this opposition.
Story
Jesuit makes a name for himself studying lichen
For gymnasts it might be a twisting tumble, for astrologers a star, for politicians a sandwich. But for an style='background:yellow;'>Jesuitan> ecologist Fr. John McCarthy that ultimate accolade — confirmation of a lifetime of scientific research — is to have a lichen named after him.
Story
Canadian Jesuit Discovers New Species of Lichen
Fr. McCarthy, who has devoted decades to ecological research, now has a species of lichen named after himself.
Story