Jesuit makes a name for himself studying lichen

January 29, 2016 — For gymnasts it might be a twisting tumble, for astrologers a star, for politicians a sandwich. But for Jesuit ecologist Fr. John McCarthy that ultimate accolade — confirmation of a lifetime of scientific research — is to have a lichen named after him.

Acarospora maccarthyi (Latin spelling rules dictate the extra ‘a’) is now the internationally recognized moniker for a previously unknown species of lichen. McCarthy discovered the new lichen near Port-au-Port, Newfoundland, about an hour’s drive southwest of Corner Brook. “I was quite surprised,” McCarthy told The Catholic Register of the honour of having a species bear his name.

Modest and self-effacing, McCarthy considered protesting to the California and Czech Republic-based lichenologists Kerry Knudsen and Jana Kocourkova over their decision to give the new species his name.

“If you’re going to name something, name it after a morphological or chemical feature that’s distinctive to the species,” is the Jesuit’s philosophy on scientific naming.

But not only was McCarthy the first to collect and investigate the species, it is also only found in his native Newfoundland. Looking for help in classifying the new lichen, McCarthy was referred to Knudsen and Kocourkova, a married couple of scientists specializing in lichens — particularly the Acarospora genus.

Kocourkova teaches in the faculty of environmental sciences at the Czech University of Life Sciences in Prague, where her husband is also a researcher. Knudsen is a world-leading expert in Acarospora and California lichens, and keeper of the herbarium at the University of California Riverside. While at a meeting of Jesuits in Los Angeles last year, McCarthy was able to visit his lichenologist colleagues with his bag of rocks for a day of comparing notes.

“(Knudsen) knew right away that this is new,” recalled McCarthy. “Because he knew the genus very well. In terms of evolution, it kind of fit in between other species. They were quite happy to be able to describe it.” 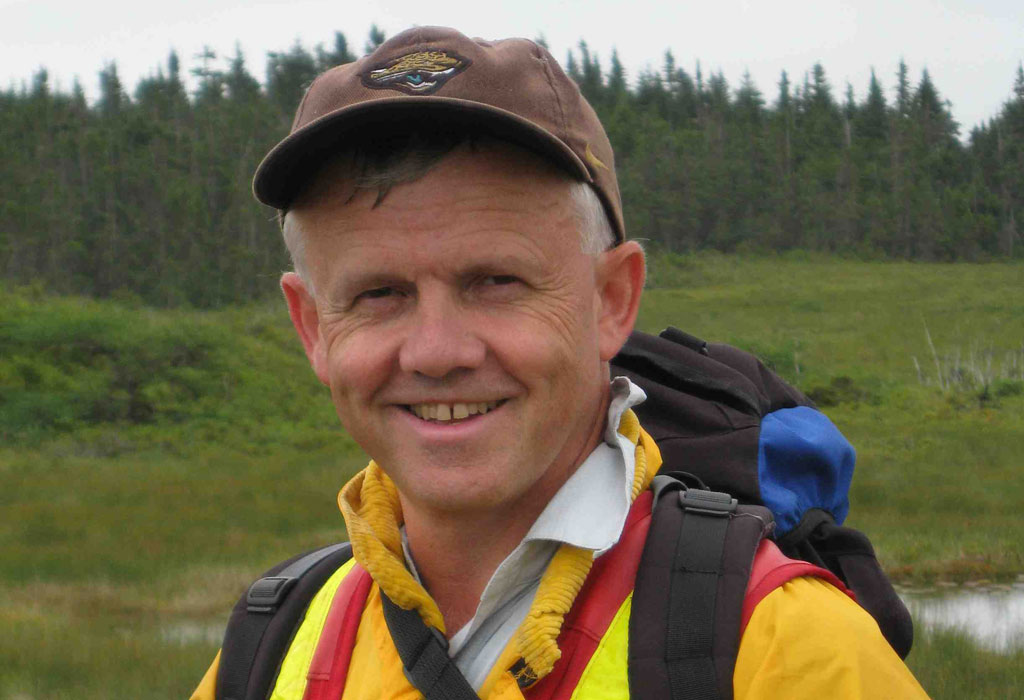 Lichens are unique organisms that are a combination of algae and fungi. It is estimated only about half the lichens in the world have been classified, described and named — about 28,000 of them. The discovery of new species isn’t a rare event. New species are found every year, said McCarthy. But they’re not found by an army of well-paid, full-time scientists who can dedicate themselves to a deeper understanding of nature for its own sake, said Knudsen in an e-mail.

“There are very few jobs for lichenologists,” he said. “Fr. John, like many of us, has fallen in love with these fascinating organisms and studies them out of a passion for life itself. His work — which is serious, scientific work — is also a prayer of adoration for the Creator and a rejoicing in the wonder and beauty of the creation.”

In fact, McCarthy’s full-time job is socius (principle advisor to the provincial superior) of the Canadian Jesuits. While at a recent meeting of Jesuits in Rome to prepare for the General Congregation, McCarthy was able to sneak away to Frankfurt to meet with a German lichenologist.

Science and ecology is part of McCarthy’s official duties as a Jesuit. Next to his office, where he wades through paperwork, planning and meetings, is a small laboratory where thanks to a donor McCarthy is able to keep a couple of microscopes and related equipment so he can spend an hour or more most days on research. He and a lichenologist from New Brunswick are currently cataloguing all the known species of lichens in Newfoundland.

“That’s how I do it, kind of between the jigs and the reels,” said McCarthy.

It’s work that these days fits with Pope Francis’ intense interest in the environment, science and the future of the human race. The Pope referred to “biodiversity” more than a dozen times in last year’s encyclical Laudato Si’.

“Biodiversity is considered at most a deposit of economic resources available for exploitation, with no serious thought for the real value of things, their significance for persons and cultures, or the concerns and needs of the poor,” wrote the Pope.

Knowing the natural world — just for the sake of understanding it and delighting in it — is important in the Jesuit spirituality of both McCarthy and Pope Francis because as creatures of God we cannot know God, or ourselves, without knowing God’s creation.

And there’s a lot more to know, said Knudsen.

“Most of those 50 million species (of plants and animals on Earth) have not been studied or named by man. The main reason is that they are of no economic value to humans at this time,” he said. “This is changing for lichens. With cancer studies and biotechnology, any organism may have a gene that is valuable economically.”

Lichens in fact have a role to play in helping science understand how humans are changing their environment, said McCarthy. Lichens are being used in Europe and the United States as a kind of ecological thermometer that can measure climate change and pollution.

“If the Earth is polluted, they will be affected more directly than plants will be,” he said. “They’re kind of like the canary in the mineshaft, if you will.”

Having named and described the Acarospora maccarthyi, Knudsen and Kocourkova have contributed McCarthy’s sample to one of the largest collections in the world in Uppsala, Sweden.

Science, faith are a perfect fit in Jesuit’s life
Jesuits have a long tradition in science and there’s a good reason for that, says Jesuit lichenologist and ecologist Fr. John McCarthy.
Story
Nature as the Word and Beauty of God: The passion of Jesuit-ecologist John McCarthy
How often have you heard the claim that faith and science are incompatible or strictly opposed? Too often religion seems to ‘get a bad rap’ these days. Well, Fr. John McCarthy, Jesuit priest and ecologist, doesn’t buy this opposition.
Story
Canadian Jesuit Discovers New Species of Lichen
Fr. McCarthy, who has devoted decades to ecological research, now has a species of lichen named after himself.
Story