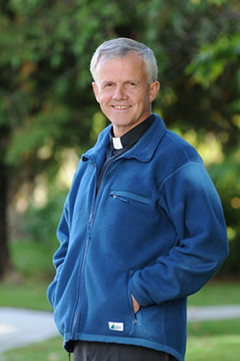 June 7, 2016 — Some people might demur if offered a chance to have a species of lichen — a combination of fungus and algae — named after them. But not Jesuit Father John McCarthy.

Fr. McCarthy, who has devoted decades to ecological research, was the first person to collect and investigate a previously unknown species of lichen, which he found in Port-au-Port, Newfoundland, Canada.

The newly classified lichen, one of 28,000 known species, has been named Acarospora maccarthyi in honor of the Jesuit ecologist.

This love of exploring God’s creation has fascinated Fr. McCarthy his whole life. “I was seduced by nature; tempted by rock, wind and water, invited by barrens, bogs and forests, infatuated by the wilderness of my native Newfoundland. Mesmerized, obsessed, blinded, I fell for nature,” he said.

Fr. McCarthy joined the Society of Jesus in 1983 and was ordained a priest in 1994. He is socius to the provincial of the English Canada Province and is the director of formation for new Jesuits. Although these are his primary responsibilities, his ecological research is encouraged by the Jesuits.

“My vocation to science and to nature and my Jesuit vocation have come together as one and the same,” said Fr. McCarthy. “Nature speaks to us of God and of God’s love for us. I am blessed in my efforts to speak of nature as the creation of God.”

Fr. McCarthy often speaks and writes on the relationship between theology and ecology. His book, “Do Monkeys Go to Heaven? Finding God in All Creation,” discusses the need to eliminate the distinction between science and spirituality. He believes that nature, and the study of nature, is God’s revelation to us.

This ongoing examination of the scientific in the interest of the religious responds directly to Pope Francis’ call to action in Laudato Si’. Fr. McCarthy’s work with a fellow lichenologist to catalog all known species of lichen in Newfoundland has also led to the creation of parks and the preservation of wilderness areas. [Source: The Catholic Register]

Science, faith are a perfect fit in Jesuit’s life
Jesuits have a long tradition in science and there’s a good reason for that, says Jesuit lichenologist and ecologist Fr. John McCarthy.
Story
Nature as the Word and Beauty of God: The passion of Jesuit-ecologist John McCarthy
How often have you heard the claim that faith and science are incompatible or strictly opposed? Too often religion seems to ‘get a bad rap’ these days. Well, Fr. John McCarthy, Jesuit priest and ecologist, doesn’t buy this opposition.
Story
Jesuit makes a name for himself studying lichen
For gymnasts it might be a twisting tumble, for astrologers a star, for politicians a sandwich. But for an style='background:yellow;'>Jesuitan> ecologist Fr. John McCarthy that ultimate accolade — confirmation of a lifetime of scientific research — is to have a lichen named after him.
Story