August 19, 2015 — Twenty-four Jesuit novices in Canada and the United States professed First Vows of poverty, chastity and obedience this month. The profession of vows comes after a Jesuit completes his first two years of formation in the novitiate and signifies his commitment to the Society of Jesus.

“They’re really committing themselves to live religious life within the Society of Jesus by making this profession,” says Jesuit Father Dave Godleski, delegate for formation and Jesuit life at the Jesuit Conference of Canada and the United States, who has attended numerous First Vows Masses over the years.

“It’s not a sacrament, but it’s as important as making a marriage commitment; you’re making a vow to God in front of all these people. It’s a very moving experience.”

During their two years in the novitiate, the novices prepared to become vowed members of the order by learning about the Society, participating in local ministries and living in Jesuit communities. They also embarked on pilgrimages, performed community service and completed the Spiritual Exercises — a 30-day silent retreat developed by St. Ignatius. 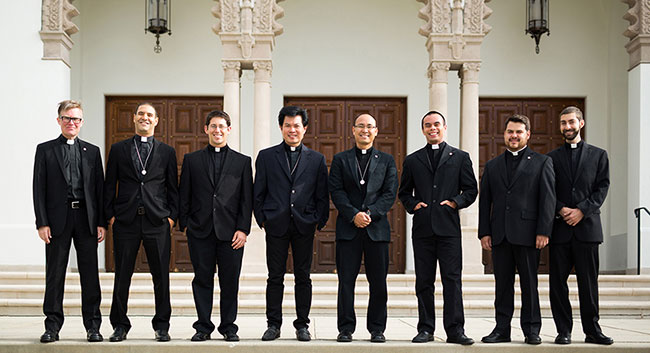 “The whole purpose of the novitiate is to get them ready to become vowed members of the Society of Jesus,” Fr. Godleski explains

As part of his formation, Jesuit Mike Tedone, who professed First Vows on August 8 in Los Angeles, spent the last year teaching at Jesuit-founded St. Andrew Nativity School in Portland, Oregon, which provides low-income middle-schoolers with a Catholic education at no cost. Tedone, who got to know the Jesuits as a student at Marquette University in Milwaukee, says, “I was always struck by their humanity and their love for people and most of all for Jesus.” 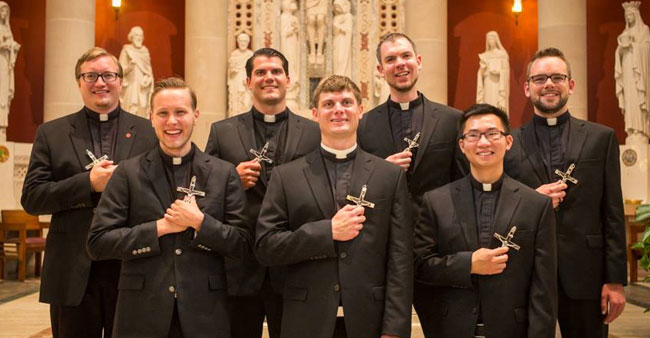 “We are contemplatives in action,” Tedone says. “We are men who are rooted in the love of Christ. We are loved sinners. Our prayer leads us out to be witnesses of Christ’s love in the world.”

As novices, the men also practiced living the vows. “They’ve been asked to live during the novitiate as if they have taken vows of poverty, chastity and obedience,” Fr. Godleski says. “So before they officially profess them, they’ve already had two years of experience trying them out.” 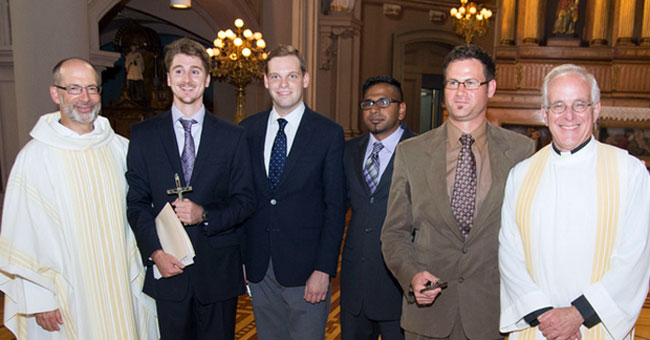 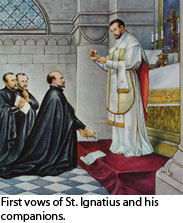 At the First Vows Mass, each Jesuit novice makes the profession of vows individually in front of the Eucharist, just as St. Ignatius, founder of the Jesuits, and some of his first companions did. The also receive a vow cross that they will keep for the rest of their lives.

“The vows themselves are relatively simple, but listening to the men make their profession and knowing what they’ve went through during the past two years at the novitiate, the experiences they’ve had — it’s very moving,” says Fr. Godleski.

“I feel very consoled to hear a man make a commitment of himself to be a member of the Society of Jesus and live out the vows of poverty, chastity and obedience.” 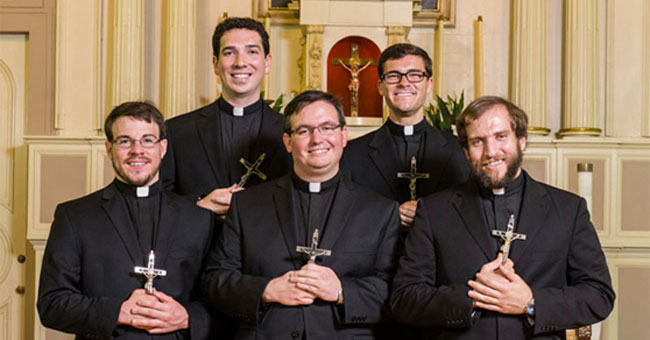 Following the profession of First Vows, Jesuits preparing to be priests usually begin three years of studies: two years of philosophy studies, combined with one year of graduate-level theology courses. Those men who took vows as a Jesuit brother will usually take several theology courses and work on an advanced degree in a field of interest.

The Death of Joyce Echaquan: Anti-Indigenous Racism
On September 28, 37-year old Joyce Echaquan, mother of seven, member of Atikamekw First Nation of Manawan, died amidst dehumanizing racist insults in a hospital in Joliette, Quebec.
News
“For a Different World”: Jesuits of Canada and Haiti Welcome 13 New Novices
With great joy and gratitude, the Jesuits welcomed this summer thirteen new novices who entered the Society of Jesus; five in Canada and eight in Haiti. The novices have just completed their first period of probation. We thank God for the great blessing of their vocation to the Society.
News
A final farewell to the eight Jesuit victims of COVID-19
On Friday, September 4, Jesuits, family, and friends gathered at Guelph to say a final goodbye to those Jesuits who died during these past few difficult, COVID-filled months. The cremated remains of George O’Neill, Mike Hawkins, Peter Larisey, Norm Dodge, FX Johnson, Charlie Sitter, Mike Murray, and Joe Frechette were laid to rest in the Jesuit Cemetery on the grounds of the Ignatius Jesuit Centre following the celebration of a memorial Mass at Holy Rosary Church, presided over by the Provincial.
News
Scroll to Top
X
Tweet
Share
Pin