March 23, 2020 — In February, following the Synod of Bishops for the Pan-Amazon region, commonly referred to as the Amazon synod, Pope Francis published his Apostolic Exhortation Querida Amazonia, which was addressed to all people of good will. Cardinal Michael Czerny, S.J, has already given this interview on the content of the Apostolic Exhortation.

But how should those of us in North America understand Querida Amazonia? In what ways does it concern us? Msgr. Donald Bolen (Archbishop of Regina), Sister Pricilla Solomon (Ojibwe and member of the Sisters of Saint Joseph of Sault Ste. Marie) and Cecilia Calvo (Senior Advisor on Environmental Justice of the Advocacy Office of the Jesuit Conference of Canada and the United States), who all took part in the “Tienda de la Casa Commun” alongside the last synod, have each analyzed the Exhortation and offered several paths we can follow to enact Pope Francis’ “dream” here. 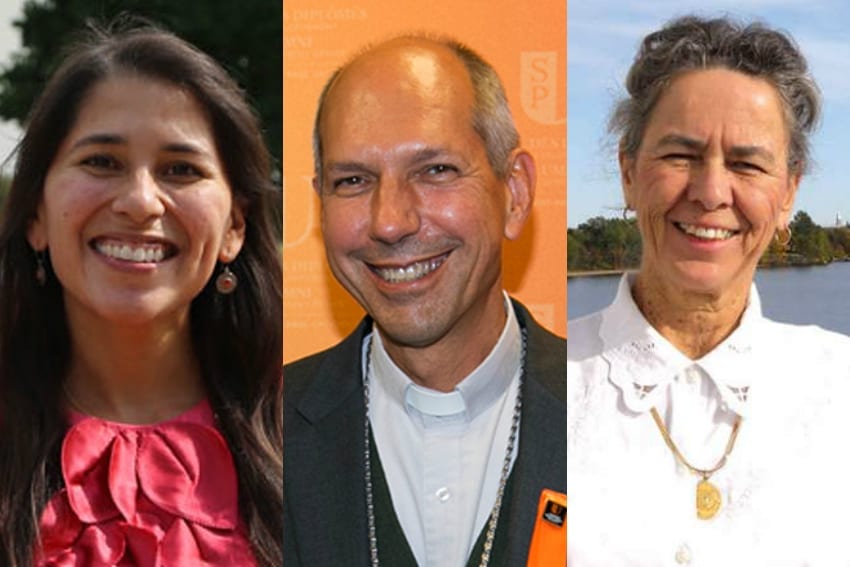 Though certainly a dream, Msgr. Bolen assures that “if the Church was truly to take this dream to heart, and the world in which we live was able to receive that dream, the world would be a better place and the Church would radiate with renewed integrity and life.

What is the most important message of this Apostolic Exhortation?

The most important message of Querida Amazonia is that land and peoples of the Amazon, especially the Indigenous Peoples, are suffering; and that in light of the Synodal process and all that has been shared and discussed, Pope Francis is offering us a dream for the Amazon, a dream which is eloquently and passionately set forth.

It is a social dream, a dream that the people of the Amazon might truly be able to live fully and well. In “a region of stolen territories,” marked by injustice and a legacy of colonial attitudes and practices, this is a dream of justice and solidarity as people come together to respond to the cry of the poor.

It is a cultural dream, a dream of a rich encounter between cultures and Peoples, where the treasures and gifts of each are celebrated and where cultures that are threatened will be protected, so that the beautiful diversity of the region will shine forth.

It is an ecological dream, where people honestly and courageously face the forces which are wounding and threatening our natural world; where the splendour and superabundant life of the Amazon region are preserved; where ancestral wisdom and current technical knowledge are both placed at the service of responding to the cry of the earth.

Finally, it is an ecclesial dream, wherein the Church increasingly takes on an Amazonian face, where the joy and transformative power of the Gospel is incarnated in the lives of the people, and where listening and dialogue give rise to vibrant witness to God’s merciful dwelling among us.

Following in the same direction, Ms. Calvo underlines the need for a new relationship with creation and with one another, themes that were also present in Laudato Si’.

In the Amazon region we see the environmental destruction and loss of “human, social and cultural richness” caused by a mentality of exploitation and “a consumerist vision of human beings, encouraged by the mechanisms of today’s globalized economy.” This crisis in the Amazon region affects us all as it is a biome essential for human life and for the “equilibrium of our planet.

Pope Francis, rather than seeing the “environment as ‘resource’” calls us to see the environment as our “home.” He asks the Church and all people to stand with the ‘original peoples of the Amazon region”, to respect their cultures and listen and learn from their wisdom and reverence for creation.

Sister Solomon adds that the connection between our Common House and Indigenous Peoples is particularly strong and that we are called to act on their behalf.

Now is the time for our Church and all people of good will, recognizing the interconnectedness and interdependence of our precious earth-home’s living land and water with her Indigenous Peoples and their ancient wisdom of caring for these sacred gifts, to engage with them in addressing the global economic social, religious and cultural systems that currently threaten their lives, the life of the planet and all its inhabitants of every species and nature.

Another significant aspect for me is that Pope Francis challenges us, without condemnation, by engaging us in the non-confrontational manner of sharing his dreams which many people, including many Indigenous people, understand as capable of effecting transformation in those who respond to the dreams.

How is Canada (and more broadly, North America) called upon to respond to Querida Amazonia?

To change things for the better, Mme Calvo suggests that Canadians and Americans should ask themselves “not only how we through our consumption and energy use are contributing to climate change and the devastation of the Amazon region and its peoples, but also how indigenous peoples and communities on the margins in North America are being hurt by the extraction of fossil fuels and an economy of exclusion.” Building on these themes, Sister Solomon also noted that:

Canada is called to recognize that what happens in Amazonia, whether life-giving or life-destroying, has visible and invisible links to, and effects, in Canada. Both the Church and civic society in Canada are implicitly called by Querida Amazonia to evaluate and transform life-threatening relationships with the land and the peoples Indigenous to the land, into life-giving relationships of care, compassion and love.

No biome is independent of the others; no biome can function without impact on the others. What we do in Canada has considerable impact on the rest of our common home. One of the key responses that Canada can make is to recognize that the extractive industries on which so much of our economy currently depends need to be more closely and more justly monitored and, as much and as quickly as possible be replaced by less-destructive industries that can provide economic and social benefits without destroying the earth for future generations. Already there exist less-damaging alternatives to oil extraction, but Canada is not yet focusing on making them more available and creating a less carbon-dependent nation.

Canada can also learn much from the dreams of Pope Francis and the people of Amazonia regarding the inculturation of the faith and the life-protecting practices of the Indigenous peoples. Canada needs to take seriously the Truth and Reconciliation Commission’s Calls to Action and to engage with Indigenous Peoples developing relationships of respect, equality and interdependence.

For his part, Msgr. Bolen outlines the responsibility of the Catholic Church in Canada in response to the Apostolic Exhortation.

At the very start of the document, Pope Francis notes that the document is addressed to the whole world, in part so that it might “assist other areas of our world in confronting their own challenges”. While there are many ways in which Canadians and the Catholic Church in Canada could walk in solidarity with the Peoples of the Amazon and engage with and be assisted by Querida Amazonia, I think the most powerful response would be for us as church to engage in a careful reading of the text with our Indigenous Peoples, and to draw on the text as a way of deepening and strengthening our walking together.

Reading Querida Amazonia together with an eye to the history of our Indigenous Peoples and our relations with them would turn our attention to many aspects of the document.

For example, towards the fact that the Amazon is considered by many to be an “enormous empty space to be filled” without recognizing the rights of the original people; that new forms of colonialism– often disguised and concealed but still destructive– continue to oppress Indigenous Peoples, or that Indigenous Peoples should be the Church’s principal dialogue partners, from whom we have the most to learn.

All of these invitations and acknowledgements would have close parallels for us in Canada, and thus the text could be a help to us as we seek new ways of walking together in this place.

How does Querida Amazonia influence the work of Jesuits in Canada and the United States, especially in regards to the Universal Apostolic Preferences?

For Ms. Calvo, the themes of Querida Amazonia are intimately connected to the Universal Apostolic Preferences of the Society of Jesus.

The Society of Jesus and its partners in Canada and the U.S. can play a special role in promoting ecological education through Jesuit works, institutions and communities. In this way, the Society of Jesus in Canada and the U.S. can encourage discernment within Jesuit works, communities, parishes, schools and universities about lifestyle and institutional changes that can be put in place to live out our vocation to care for creation and those on the margins. In a special way, the Society of Jesus plays a key role in helping to shape the minds and hearts of young people.

In Canada and the U.S., Jesuits and partners have a history of working closely with indigenous communities. Querida Amazonia challenges us to ask ourselves: How can we continue to take steps to stand in solidarity with indigenous communities in the Amazon and in North America whose environment, land and human rights are being threatened? How can we seek healing of the past and continue to support spaces for dialogue where we can listen to the voices and concerns of indigenous peoples in North America?

Finally, what is your reaction to the disappointment felt by some towards the Apostolic Exhortation?

According to Msgr. Bolen, Querida Amazonia is an extraordinary document that is worthy of our time and our efforts to bring about a transformative impact on the Church and on the world.

While people might be legitimately disappointed because it didn’t address a particular hope or aspiration, no one document can address every situation or need. My encouragement is to take it for what it is rather than to lament the absence of one thing or another, and to engage with it deeply. It is worthy of our time and effort.

Sister Solomon believes that if we respond whole-heartedly and seriously to the fundamental messages of Querida Amazonia, addressing the disappointments some people have felt will become secondary to engaging in the kind of transformation that the Pope proposes. “This is not to say that there may not remain a need for some of their desired outcomes but what is most essential is to stop the harm we are doing before we do irreparable damage to Amazonia and the earth itself.”

Get Involved: For the Inclusion of the Declaration on the Rights of Indigenous Peoples in Canadian Legislation
Five years ago, the final report of the Truth and Reconciliation Commission stated that the United Nations Declaration on the Rights of Indigenous Peoples (UNDRIP) should form the basis for reconciliation efforts in Canada. Several religious orders, including the Jesuits of Canada, support a change in legislation to allow the UNDRIP to be incorporated into Canadian legislation. They hope that a bill on this issue can be introduced and approved as soon as possible in the Canadian Parliament.
News
The Death of Joyce Echaquan: Anti-Indigenous Racism
On September 28, 37-year old Joyce Echaquan, mother of seven, member of Atikamekw First Nation of Manawan, died amidst dehumanizing racist insults in a hospital in Joliette, Quebec.
News
“For a Different World”: Jesuits of Canada and Haiti Welcome 13 New Novices
With great joy and gratitude, the Jesuits welcomed this summer thirteen new novices who entered the Society of Jesus; five in Canada and eight in Haiti. The novices have just completed their first period of probation. We thank God for the great blessing of their vocation to the Society.
News
Scroll to Top
X
Tweet
Share
Pin