January 22, 2015 — When Jesuit Father Peter Bisson, the provincial of the English Canada Province Jesuits, was only 12, he experienced his first real Ignatian discernment, a term he wouldn’t learn for many years.  Fr. Bisson knew he wanted to change the world, but he didn’t know how to do it.  As he carefully and prayerfully considered options, including a career in government or a job at the United Nations, he discerned that the Holy Spirit was calling him toward God.  A fairly logical choice for a kid who was secretly called “Peter the priest” by his boyhood friends in Edmundston, New Brunswick, Canada, a small town near the Canadian border where the Bisson family has lived for generations.

Because he grew up just five miles from the northernmost town in Maine, Fr. Bisson straddled two cultures from an early age.  His American mother was a native French speaker and his Canadian father spoke English, and young Peter grew up speaking both languages.  It was an easy hop across the border to visit relatives in the U.S. while maintaining solid roots in his predominantly French-speaking hometown, where he was a high school curler. 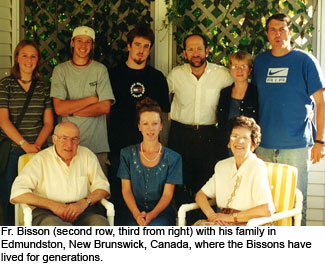 The Bissons were a traditional French Canadian Catholic family; they never missed Sunday Mass and listened to the Angelus and the Rosary every night on the radio.  At the age of 10, Fr. Bisson first learned about the Jesuits in a Canadian history class about the North American martyrs, a group of 17th century Jesuits missioned to the New World.

He was “fascinated by their sense of mission — that they were available to be sent anywhere.”  In particular, he was intrigued by St. Isaac Jogues, the Jesuit missionary who was tortured, imprisoned, released and then chose to return to the same Iroquois who had tortured him.  “I just admired his freedom, and that he could love Jesus that much was very impressive,” says Fr. Bisson.

In high school, Fr. Bisson briefly considered becoming a priest, and as an undergraduate student at McGill University in Montreal, he would drag friends to Mass although he felt “pressure to justify being a believer.”  He had a sense of a mission but didn’t know what it was, and those feelings only intensified after graduation. Later, as a finalist for a Rhodes Scholarship, Fr. Bisson discussed his interest in faith and social justice during the interview process.  Although he wasn’t selected for the scholarship, he learned to trust his “deeper desires, which was freeing.  I came back changed and decided that I was going to admit being religious.”

Committed now to exploring his faith against the backdrop of political and social justice, Fr. Bisson headed to a master’s program in religion at Union Theological Seminary and Columbia University in New York City.  In an instant, everything clicked.   He was meeting students from all denominations who shared his same interests, during a period — the mid 1980s — when people were looking at liturgy, belief and theology in new ways. 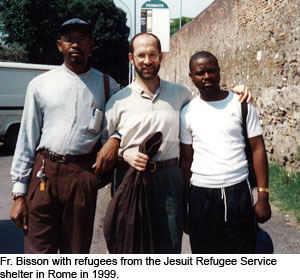 It was, he recalls, “an extraordinary time.”  His prayer life was changing too, as he went from saying prayers to a place where, “prayer would happen to me, and I would have the sense of the presence of Jesus.” Importantly too, he met the Jesuits, not the missionary martyrs who dominated his imagination as a little boy, but men at work in the world serving God through the promotion of justice.

Before long, he applied to the Jesuits and entered the novitiate in Guelph, an hour and a half west of Toronto.  Assigned as a novice to work on refugee issues at the province’s Jesuit Center for Social Faith and Justice in Toronto, he felt immediately at home.  For his novice pilgrimage, he hitchhiked around Ontario and spent a week living on the streets of Toronto panhandling. 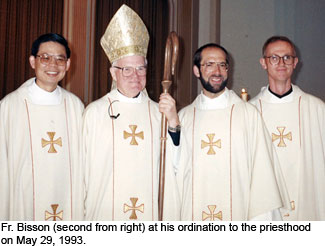 After earning a master’s degree in philosophy from Loyola University Chicago, Fr. Bisson returned to Toronto to work again with refugees, then to study theology at Regis College in Toronto.  He earned a Master of Divinity degree and was ordained in 1993.

Almost immediately, he was assigned to serve as an interpreter for the Society’s 34th General Congregation, an assembly of Jesuit representatives from around the world convoked to discuss major issues of importance to the Society.  In addition to his French and English fluency, Fr. Bisson had added Spanish and Italian to his language repertoire.  The Society of Jesus needed multilingual Jesuits to translate the Congregation’s proceedings and decrees, and Fr. Bisson was tapped.  It was a heady assignment.

“The whole experience of being in Rome and recognizing my own vocation in the universal Society of Jesus and universal Church was quite exciting,” Fr. Bisson said.

After earning a doctorate in theology from the Gregorian University in Rome, Fr. Bisson returned to Canada to teach religious studies and liberation theology at Campion College in Regina, Saskatchewan, from where he also helped to strengthen his province’s social justice center. 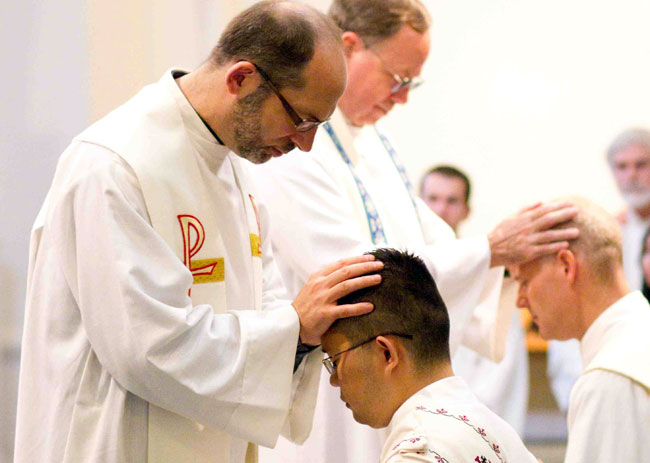 In 2007, he was tapped again to participate in a General Congregation, this time as an elected representative, as well as a member of the planning committee for GC35.  In July of 2008, he was asked to serve on the senior staff for the incoming English Canada Provincial, Father Jim Webb.

Fr. Webb and Fr. Bisson shared a common desire:  to live among the poor.  Rather than reside in a more traditional Jesuit community, they moved into an apartment in one of Toronto’s economically disadvantaged areas, a housing project called St. James Town.  Canada’s densest neighborhood, the project has 18 high-rise buildings and upwards of 25,000 residents.  Many residents are new immigrants, just starting their lives in Canada.  “They are shocked that a priest is living among them, shocked yet quite pleased,” says Fr. Bisson. 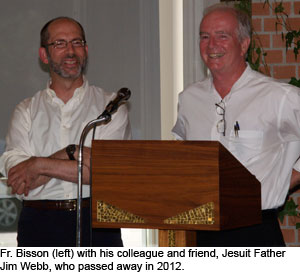 Two years ago, Fr. Webb died an early death of cancer, a blow palpably felt by Fr. Bisson, who was not only his colleague and housemate but a close friend.

Fr. Bisson was made provincial, a role he’ll hold until 2018.  He is reflective about the ways he has been “unmade and remade” in his life as a Jesuit, including that “my perfectionism is being whittled away.  I’ve learned that I can’t do everything, and that’s ok.”

He’s also learned — from these last six years spent living among people at the margins — about the power of faith.  “I’ve always found that people of faith — whatever faith — are the ones who are able to stick it out for the long haul.”

As for his long haul?  God only knows.  “I’m going along in one direction and I bump up against God, and he intervenes and grabs me by the ears and shoots me off in another direction. There’s mystery to it, and I’ve always found that’s a sign of a good decision for me.”