Church of the Gesù in Montreal Celebrates 150 Years

January 25, 2016 — On Dec. 3, 1865, the feast of St. Francis Xavier, SJ, the Church of the Gesù in Montreal opened its doors for the first time. Now 150 years later, it continues to flourish as an important part of Montreal’s religious life.

Originally built as a chapel for the Jesuits’ College St. Marie, the Church of the Gesù is named after the Society of Jesus’ mother church in Rome. While the college closed in 1969, the church, with its Baroque style architecture, has long
attracted visitors and was designated as a historical monument in 1975 by the government.

The church holds many treasures, including the remains of Jesuit martyrs Charles Garnier, Gabriel Lalemant and Jean de Brebeuf, who were French missionaries to Canada. It also has famous works of art, such as a copy of Caravaggio’s painting of St. Francis Xavier and a replica of the original statue of Notre Dame de Liesse. Miraculously bestowed upon three French soldiers during the Crusades, the original statue was burned during the French Revolution and its ashes were placed in the base of the replica at the Gesù. 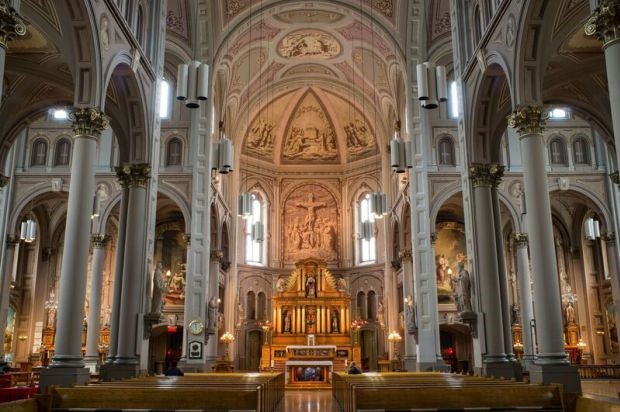 Interior of the Church of the Gesù, a Baroque-styled building that first opened in 1865. (Courtesy of the Gesù)

The Church of the Gesù has a long history of supporting the arts. In 1923, its basement was converted into an auditorium, which launched important Quebec acts such as Anciens du Gesù, Théâtre Rideau Vert and Théâtre du Nouveau-Monde.

In 1995, Jesuit Father Daniel Leblond opened a creative arts center at the church, the Gesù Centre, attracting many artists and performers. A professional artist and photographer, Fr. Leblond, former provincial of the Jesuits’ French Canada Province, believes in the importance of the connection between the arts and religion.

“Art is not religion, but art and religion are not opposites; they complement each other,” he said. “The church has a role to play to encourage people to interact with God through art, with the understanding that, historically, many of the great artists made their way through the church.”

To celebrate its 150th anniversary, the church will be hosting a series of events, including an organ concert and an original presentation of poetry and music.