Celebrating the 50th Anniversary of the SJES: A Canadian Perspective

November 21, 2019 – On November 7, Pope Francis addressed the Congress marking the 50th anniversary of the Social Justice and Ecology Secretariat in Rome. He called for a “transformation of our collective gaze, our attitudes, our ways of seeing ourselves,” adding that it wasn’t enough to serve and accompany the victims of injustice. “We need to undertake the slow work of changing structures, through participation in public dialogue.” 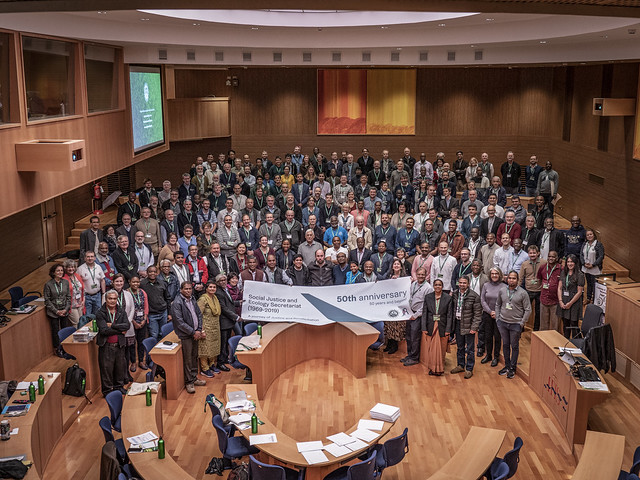 From November 4-8, more than 210 Jesuits and lay people, including experts and activists from 62 countries met to celebrate, review, renew and recommit to the social apostolate of the Society of Jesus, recognizing that the challenges facing the world today are more complex than those 50 years ago. The Congress was dedicated to Fr. Pedro Arrupe, the founder of SJES. The Jesuits of Canada province was represented by Élisabeth Garant, Ambroise Gabriel, Jenny Cafiso and Anne-Marie Jackson. 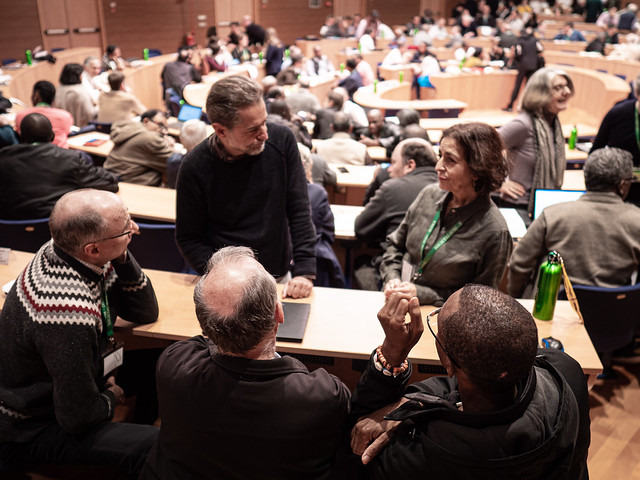 Jenny Cafiso, director of Canadian Jesuits International (top right), with other participants of the meeting

In his welcoming remarks, Xavier Jeyaraj, SJES secretary, noted the broader context of the meeting: the recent Synod on Youth, the most recent Synod on the Amazonia, the Universal Apostolic Preferences, and Pope Francis’ emphasis on the cry of the poor and the cry of the Earth. They provided a roadmap for discerning the future of the social apostolate.

It was an extraordinary assembly with the presence of the Superior General Fr. Arturo Sosa, Cardinals Pedro Barreto (Peru), Peter Turkson (Ghana) and Michael Czerny (Canada). The Secretary of the Society, Antoine Kerhuel, three of Fr. Sosa’s four assistants, several of the regional assistants and two Conference presidents were in attendance, along with Fr. Sosa, for most of the week. 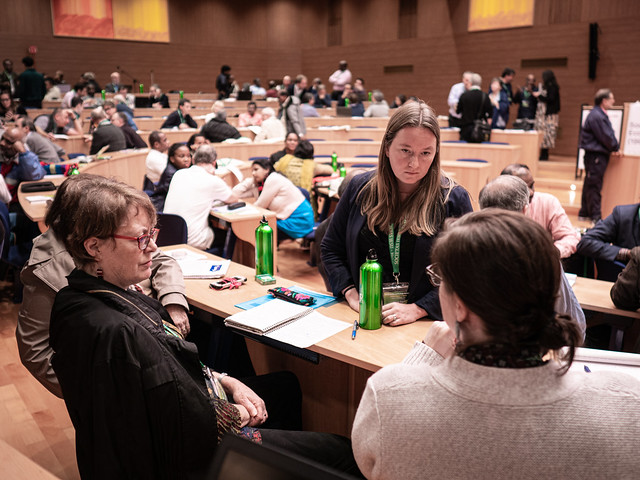 Anne-Marie Jackson, director of the Jesuit Forum (left), participates in a session.

Former secretary of SJES, Patxi Alvarez gave an inspiring overview of the fifty-year history, life and spirituality of the social apostolate. He noted that now we are called to do “justice in a global world, where everything is connected and everything is broken.” This was followed by two moving personal testimonies, from Ismael Moreno (Padre Melo) of Honduras and Lisa Connell, social delegate in Australia.

After each morning’s panel presentations, the afternoon was a time for small group spiritual conversation, beginning that first day with sharing our own stories of justice commitment. The afternoons ended with Eucharist led by a different Conference each day. 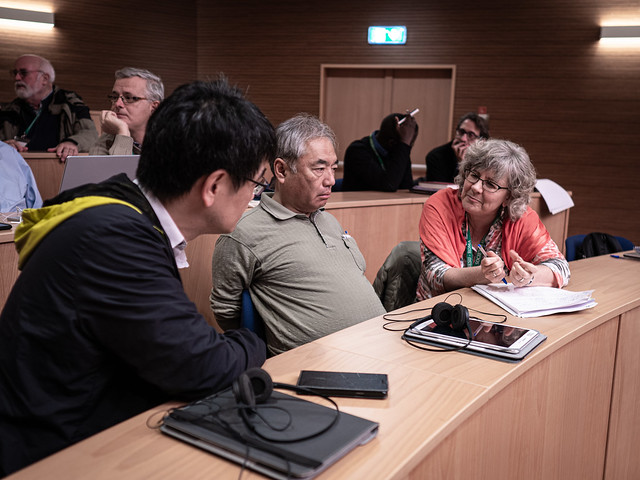 Elisabeth Garant, from the Centre Justice et Foi (right) with other delegates

The second and third days put a focus on the Universal Apostolic Preferences. After an overview of economic inequality and the Sustainable Development Goals, Jeffrey Sachs, director of the Earth Institute, reminded us that a shocking number of children under five die each year essentially because of poverty. He noted the massive tax evasion by big corporations. Joe Xavier, director of the Indian Social Institute in Bangalore, responded to the talk, urging that we understand the poor in their complexities and richness, saying not enough was being done to link the global and local. 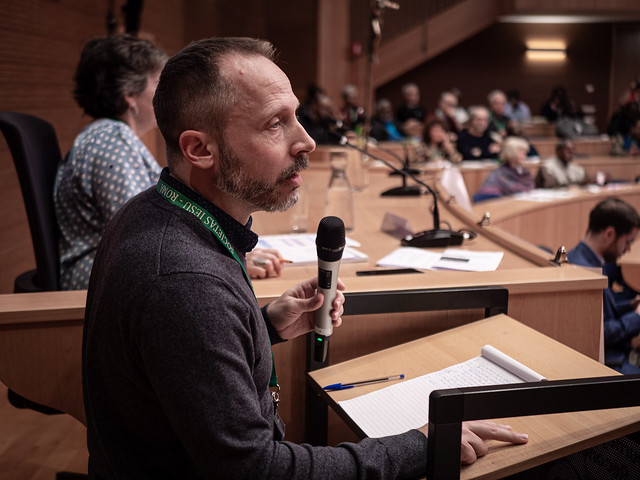 Ted Penton, SJ, secretary for justice and ecology at the Jesuit Conference of Canada and the United States

Another panel with Greg Boyle, Homeboy Industries in California and Noluthando Honono spoke about youth today. Greg’s work is with a most demonized population, gang members, and he touched everyone with his talk of the need for tenderness. “It’s not about saving or whatever… it’s tenderness.” Nolunthando, a young woman from South Africa urged us to seek young voices and “to listen with the intention of paying attention..”

The next day we had two strong speakers on care for our common home: Cardinal Barreto of Peru, fresh from the Synod on the Amazonia, gave a personal testimony and Dr. Sunita Narain, environmentalist and activist from India spoke eloquently and passionately on how climate change destroys the lives of the poor. “For people on the edge of survival, these changes push them out of their land. This breaks their backs.” “The tipping point is coming,” she said. 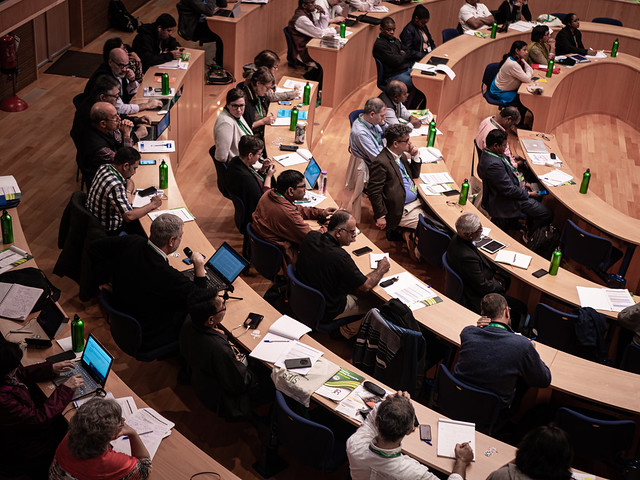 As Fr. Sosa pointed out, “let us take advantage of this very special moment in which God is once again speaking to us and inviting us to remember, thank, discern and take bold daring and risky decisions to walk with Jesus and his people in the realities of the frontiers, together with the most excluded, poor and vulnerable.” He added that this Congress confirmed the centrality of the work of the social apostolate. In light of that, an important session on the UAPs as a call to collaborate brought together James Hanvey, secretary for Faith, José Mesa, Secretary for primary and secondary education Michael Granzini secretary for Higher Education, Mark Ravizza, delegate for Formation and Tom Smolich, International Director of JRS.