October 10, 2019 — How does someone become a Jesuit? Joining the Society of Jesus is a two-step process: First Vows and Final Vows with long years of formation in between. However, the path between a lay life and the last Jesuit vows is very lengthy (approximately 13 to 20 years!) and perhaps sometimes difficult to follow. When does a man become a “Jesuit?” When is he a “Father” or a “Brother?” What is the purpose of this lengthy formation? What are the principles that orient it? Gilles Mongeau, SJ, who helped evaluate this process within the Jesuit Conference of Canada and the United States, details how the five steps of Jesuit formation will tangibly change. 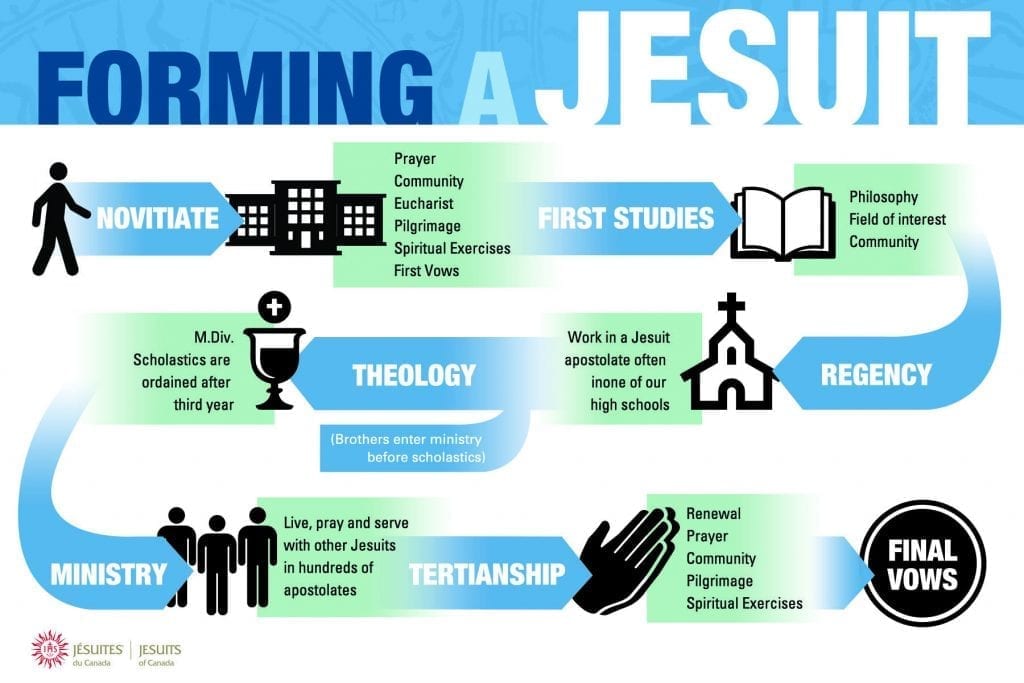 Once a layperson has discerned that he might be called to religious life and, in this case, to the Society of Jesus, he becomes a Jesuit candidate. He must then undergo an application process before being accepted as a novice by Father Provincial. He then enters the novitiate and from that day on, he becomes a Jesuit… if he is able to make it to his First Vows!

The novitiate lasts two years; the purpose of this step is to prepare Jesuits for First Vows. During this time, the novices learn the history of the Society, pray, gain a practical understanding of the Constitutions, work in an apostolate (for example, with refugees or the sick) and make a 30-day retreat, namely the entire Spiritual Exercises of Saint Ignatius of Loyola. Jesuits also complete a pilgrimage for a few weeks with nearly nothing in their pockets. The goal? To learn to trust God. They survive thanks to people’s generosity. Charism is the element which guides the three others (context, content and competence) during the novitiate. For example, Jesuits learn to use discernment to read the signs of the times. In the Jesuit Province of Canada, novices do part of their formation with novices from other communities.

At the end of the novitiate, with the approval of their Provincial, the Jesuits take their First Vows (chastity, poverty, obedience) during a mass, also professing to definitely become part of the Society of Jesus through Final Vows. They pronounce their vows as scholastics (if they wish to become priests) or brothers. As Fr. Mongeau states, “the meaning of First Vows is an offering of oneself to God.”

The new changes to Jesuit formation apply especially to First Studies. Traditionally, after the novitiate, Jesuits would study philosophy (to learn critical thinking) and some humanities (to learn the context). The purpose of this part of formation is to deepen one’s understanding of the sociocultural context and critical thinking in order to react to injustice, while avoiding relativism. According to Gilles Mongeau, the 2.0 formation prioritizes the element of context.

Jesuits study philosophy (especially the foundations such as metaphysics, epistemology, some history and social sciences.) They also do theology – not the contents of faith – but the social teachings of the Church, the theological point of view regarding the context, when reading of the sign of the times. The skills to be acquired: a practical apostolate to balance studies. There is always an adjustment based on the skills that the Jesuits already possess. We are able to adapt to their needs.

In addition to studying, scholastics or brothers also work part-time in a ministry. It is therefore a time of intellectual formation and community involvement.

After this first series of university studies, Jesuits enter regency for two or three years. Regents live in a Jesuit community and are involved in an apostolate on a full-time basis. For example, Canadian regents now work for a high school, at the Jesuit Refugee Service and at a retreat centre, Loyola House in Guelph.

Competency is highlighted during regency to make sure young Jesuits can fully and actively participate in one of the Society’s apostolates, be of service, be companions to other Jesuits in the ministry and bear the fruits of the Kingdom. Jesuits must be able to properly integrate their spiritual, social and active formation. Scholastics can discover if their work brings them joy (or if they are miserable) and the Society can see if they can make a true contribution and joyfully live the life of a Jesuit.

After two years of work, young Jesuits take time to reinterpret their regency with other Jesuits in order to see if they are ready to become priests (and to be ordained) or to become brothers. If so, they go on to the next step.

After having received the approval of their superiors, Jesuits resume their studies, in theology this time, for four years. They must obtain at least a first degree in theology, but often continue to a graduate level. For example, Fr. Pierre Côté, SJ, completed a PhD on marriage while Fr. Gilles Mongeau completed his PhD on the theology of Saint Thomas Aquinas. The scholastics and brothers do these studies, with some adjustments, depending on what ministry they will take up within the Society. The principal element in theology is content.

The reason for assimilating content is to assume a leadership role within the Church, not just to accumulate knowledge for knowledge’s sake. Jesuits must be able to spread the faith in a solid, personal (and yes, orthodox!) manner, not just like parrots. One must be able to speak to others about faith in the Church with one’s own voice, all the while communicating the Church’s teachings.

Scholastic Jesuits are ordained priests after four years of theological studies. They are finally “Fathers” and can then celebrate masses!

Tertianship lasts about 9 months, but can be longer. This year is a third period of “probation” after their moment of application and the novitiate. Key experiences of the novitiate are repeated, but now with several years of experience as a Jesuit!

Guided mainly by the element of charism, after their studies and several years of work, the fathers or brothers – then referred to as tertians – go through further steps of spiritual formation. This includes redoing a 30-day retreat and once again studying the history and Constitutions of the Jesuits to reaffirm their vocation and discover the wisdom of the texts based on their experience. They also do one or several experiments. For example, Fr. Mongeau first went to Africa and his second experiment was in his own milieu. In addition to studies and experiments, the Jesuit reexamines his life in the Society to find out if there are any signs in his experience that the offering he made to God during his first vows has been accepted.

Finally, after approval from the Jesuit Curia in Rome, the Jesuit fathers or brothers are invited to pronounce their perpetual and solemn Final Vows: poverty, chastity and obedience. They also profess a final vow of special obedience to the Pope regarding mission. Only Jesuits who have pronounced this last vow can become Provincials. As Father Mongeau points out, “the solemn vows celebrate the fact that the offering of oneself has been accepted by God; one knows this by reexamining what has gone on since the First Vows.”

After this formation, one of the longest of all the religious orders, Jesuits are ready to undertake any mission! To learn more, the Jesuits of Canada have published a series of videos  where Fr. Chris Calderón, SJ, summarizes all the steps of Jesuit formation. James Martin, SJ, has also published an article on America.