Religion and Spirituality in Canada: Powerful Themes for Most Canadians 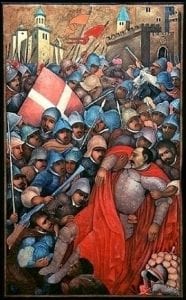 The Society of Jesus celebrates the Ignatian Year in 2021–2022, 500 years after the cannonball injury that precipitated the conversion of Saint Ignatius. Half a millennium after this event, Jesuits can be found in all parts of the globe.

Meanwhile, the world has changed. The Catholic world has changed as well, marked in recent history by Vatican II, the abuse crisis, the work on the peripheries of Pope Francis, and a growing secularization. Western societies, including Canada, have also changed. The government now has a significant role in education, health, and social services. Nonprofit organizations are also working in areas formerly taken care of by religious congregations. Canadians may or may not express a belief in God; they may or may not practice a variety of religions and spiritualities.

What is the role, the significance of the Society of Jesus within this Canadian context today? A series of articles will explore this topic from various perspectives. Do not hesitate to contact us to engage in the discussion!

This first article, based on various surveys conducted by Angus Reid, gives a global portrait of religion in Canada. What can we learn from it?

As Angus Reid explains: There is no such thing as the “average Canadian” when it comes to faith, religion, and spirituality.

Religion and spirituality in Canada in 2019

Although the word “religion” has a negative connotation for 33 percent of Canadians (especially those who are nonbelievers or uncertain—see “A spectrum of spirituality,” 2017), religion plays an important role in people’s lives. In 2019, the majority of Canadians (74 percent) had some connection—strong, weak, or somewhere in between—to religion, whereas 26 percent were inclined to reject it.

The same survey also showed that respondents had various relationships to spirituality and religion, which must be differentiated. Angus Reid defines the difference as follows (in “Religion and faith in Canada today”):

– Spiritual: of, relating to, or affecting the human spirit or soul as opposed to material or physical things

– Religious: relating to or believing in a religion…forming part of someone’s thought about or worship of a divine being

Again, while 24 percent of respondents in 2019 consider themselves to have no connection to spirituality or religion, the remaining 76 percent are spiritual, religious, or both.

A 2015 survey provides even more information on religion in Canada. In addition to detailing the relationship to religion by gender and age, it also indicates that while Canadians are less likely to fully embrace a religion (with its rituals, teachings, beliefs), the fact remains that 70 percent still believe in a “Supreme Being.”

Angus Reid uses the latest data from Statistics Canada to show that Roman Catholicism is still the most practiced religion in the country (38 percent of the population is Catholic, followed closely by 31 percent who are part of the wider Christian population), especially by people from immigrant backgrounds.

Here again, however, the picture is more nuanced. Of those surveyed, only 10 percent practice Catholicism on a daily basis and 22 percent practice it occasionally. Moreover, the figures vary from province to province!

Leaving the Catholic Church: many reasons

Among the reasons why people have left Catholicism are a change of faith, the Church’s position on homosexuality and women (ordination, contraception, etc.), or sexual abuse by priests and the Church’s cover-up of such abuse.

Thus, while people are still spiritually engaged, the problem at the heart of the decline in religious practice seems to be the very credibility of religious institutions.

Angus Reid, the founder of the polling firm, talked about religion during a conference. He explained that while weekly attendance at places of worship has decreased considerably in recent years (from 56 percent in 1956 to 15 percent in 2016), this is not the only data to consider.

“I did not come here to deliver a pessimistic address because, while religion is undoubtedly important, the litmus test of the faith of Canadians is not found only in church attendance. Another lens involves the thoughts and words of Canadians…under the heading of PRAYER.”

Prayer—across all religions and spiritualities—is practiced at least somewhat by 86 percent of Canadians, mostly in a private context. Even the 57 percent who tend to reject religion believe that prayer enriches the lives of those who pray! In fact, prayer is the most practiced monthly spiritual practice in the country (40 percent of respondents in 2017). Why do people pray? Mostly to thank God or to ask for help.

In short, these figures (which vary according to several factors) show that Catholicism, on the one hand, and a desire to have a spiritual life, on the other, are still prominent elements in the lives of Canadians today. What does this mean for Jesuits? The following articles will explore in greater depth the country’s spiritual and religious landscape, and the role of the Society of Jesus within it.

Jesuits of Canada Offer New First Studies Program
This September, the Jesuits of Canada will be offering a brand-new program in Quebec City for young Jesuits doing their first studies!
Story
“A Shepherd to His People”: Jesuits of Canada Welcome New Priest
On Saturday, August 21, the Jesuit Province of Canada celebrated the priestly ordination of Adam Lalonde, SJ (Canada) at St. Patrick Parish in Ottawa, Ontario, by the Most Reverend Terrence Prendergast, SJ, Archbishop Emeritus of Ottawa-Cornwall.
Story
Sharing Joys and Hopes, Sorrows and Anxieties: Father Oland’s Homily for the Feast of Saint Ignatius
Let’s celebrate this anniversary of the death of St. Ignatius Loyola, who, as a companion of Jesus, showed remarkable resilience, fortitude, trust in God, and the ability to seek and to find God in all things and in all situations, no matter how difficult or challenging!
Story