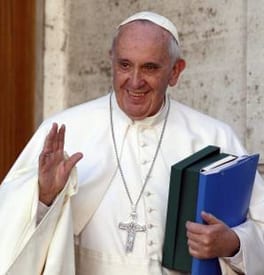 April 8, 2016 —Today Pope Francis released the highly anticipated “Amoris Laetitia” (“The Joy of Love”), his reflection on the family and family life. The pope wrote that the same mercy and patience that are essential for building a strong family must be shown to those whose families are in trouble or have broken up.

The document, subtitled “On Love in the Family,” is what is known as an “apostolic exhortation,” a document addressed to the whole church reflecting on themes of church life and faith. While it contains no new rules or norms, it encourages careful review of everything related to family ministry and, particularly, much greater attention to the language and attitude used when explaining church teaching and ministering to those who do not fully live that teaching.

“No family drops down from heaven perfectly formed; families need constantly to grow and mature in the ability to love,” Pope Francis wrote. People grow in holiness, and the church must be there to give them a helping hand rather than turn them away because they have not attained some degree of perfection.

The pope wrote the exhortation following the 2014 and 2015 synods of bishops on the family, which discussed controversial issues such as divorce, remarriage and same-sex marriage and the Catholic Church. Like synod members did, the pope insisted that God’s plan for the family is that it be built on the lifelong union of one man and one woman open to having children. 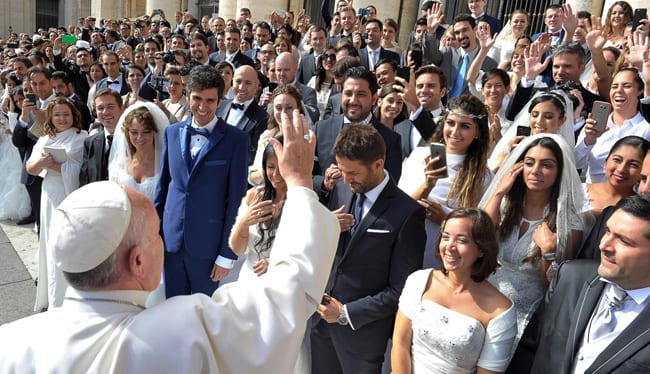 The document was officially released at noon in Rome at a Vatican news conference with Cardinal Lorenzo Baldisseri, general secretary of the Synod of Bishops, Austrian Cardinal Christoph Schonborn of Vienna, and Giuseppina and Francesco Miano, a married couple who participated in both the 2014 and 2015 synods.

“Amoris Laetitia” touches on all the issues raised at the synods and gives practical advice on raising children, urges a revision of sex-education programs and decries the many ways the “disposable culture” has infiltrated family life and sexuality to the point that many people feel free to use and then walk away from others.

“Everyone uses and throws away, takes and breaks, exploits and squeezes to the last drop. Then, goodbye,” he wrote.

Much of the document is tied to the theme of God’s mercy, including Pope Francis’ discussion of welcoming the vulnerable.

“Dedication and concern shown to migrants and to persons with special needs alike is a sign of the Spirit,” he wrote. Both are “a test of our commitment to show mercy in welcoming others and to help the vulnerable to be fully a part of our communities.”

The synod issues that garnered the most headlines revolved around the question of Communion for the divorced and civilly remarried, as well as Catholic attitudes toward homosexuality. Pope Francis repeated his and the synod’s insistence that the church cannot consider same-sex unions to be a marriage, but also insisted, “every person, regardless of sexual orientation, ought to be respected in his or her dignity.”

On the question of families experiencing difficulties, separation or even divorce and remarriage, Pope Francis said responses to the questionnaires sent around the world before the synod “showed that most people in difficult or critical situations do not seek pastoral assistance, since they do not find it sympathetic, realistic or concerned for individual cases.” 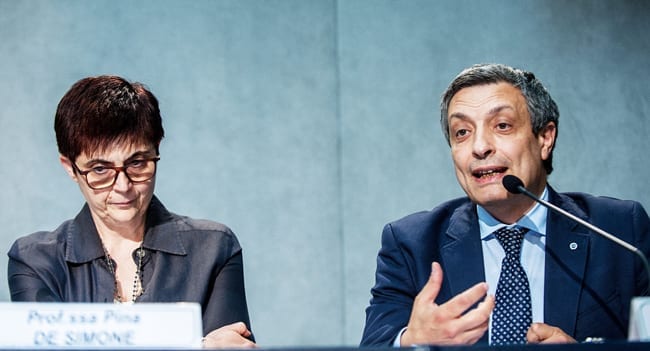 Giuseppina and Francesco Miano, a married couple, speak during a news conference for the Synod of Bishops on the family in 2014. (CNS photo/Massimiliano Migliorato, Catholic Press Photo)

Particularly in ministry to divorced and civilly remarried Catholics, Pope Francis said pastors must help each couple look at their actions and circumstances, recognize their share of responsibility for the breakup of their marriage, acknowledge church teaching that marriage is indissoluble and prayerfully discern what God is calling them to.

Pope Francis said it would be a “grave danger” to give people the impression that “any priest can quickly grant ‘exceptions’ or that some people can obtain sacramental privileges in exchange for favors.”

At the same time, he insisted, “the way of the church is not to condemn anyone forever; it is to pour out the balm of God’s mercy on all those who ask for it with a sincere heart.”

Divorced and civilly remarried couples, especially those with children, must be welcomed in Catholic parishes and supported in efforts to raise their children in the faith.

Generally, without an annulment of their sacramental marriage, such a couple would not be able to receive Communion or absolution of their sins unless they promised to live as “brother and sister.” But every situation is different, the pope said, which is why the church does not need new rules, but a new commitment on the part of pastors to provide spiritual guidance and assistance with discernment.

Turning to those who believe allowing divorced and remarried Catholics to receive Communion waters down church teaching on the indissolubility of marriage, the pope said, “we put so many conditions on mercy that we empty it of its concrete meaning and real significance. That is the worst way of watering down the Gospel.” 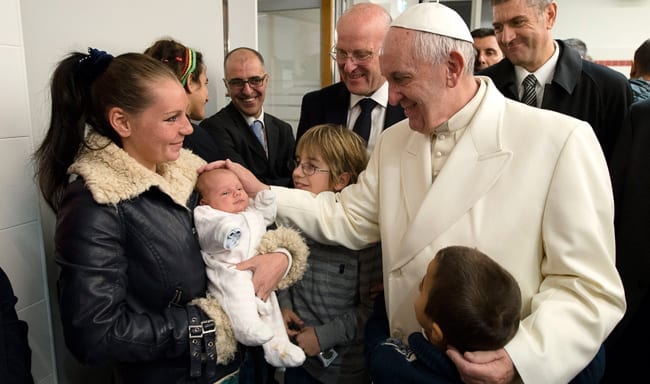 Pope Francis blesses a baby during a visit to a Caritas center for the homeless in Rome Dec. 18, 2015. (CNS photo/L’Osservatore Romano, handout)

Pope Francis called for church leaders to ensure more married couples are involved as leaders in designing and carrying out pastoral programs for families. Their witness is key, he said.

“Marital love is not defended primarily by presenting indissolubility as a duty, or by repeating doctrine, but by helping it to grow ever stronger under the impulse of grace,” he said. “A love that fails to grow is at risk. Growth can only occur if we respond to God’s grace through constant acts of love, acts of kindness that become ever more frequent, intense, generous, tender and cheerful.”

Pope Francis’ upcoming visit to Indigenous Peoples: Its importance and what it means for reconciliation [Interview]
Father Peter Bisson, SJ, Assistant to the Jesuit Provincial of Canada for Indigenous Relations, puts the Pope's visit in context.
Story
Nurturing the Synodal Process in the Province and in Our Networks: The Ignatian Family Roundtable on the Synod
In January, several members of the Ignatian family met to discuss the Synod on Synodality.
Story
Synod on Synodality: The Central Gift of Ignatian Discernment
This article offers a review of the synodal process and of the Ignatian family’s call to participate, as well as a brief summary of Sr. Loubières' “Synod on Synodality - Empowerment Webinar.”
Story