Planting Ignatian seeds: The work of Jesuit chaplains in Canada

By Eric A. Clayton

“The Ignatian spirituality that I have come to know has deepened my prayer life,” says Alessandro Vani. He’s a 2021 graduate of Loyola High School in Montreal. “My prayers have become more profound.”

“The Ignatian spirituality that I have come to know has deepened my prayer life,” says Alessandro Vani. He’s a 2021 graduate of Loyola High School in Montreal.

“Fr. Brennan was always present throughout my high school years,” Vani remembers. “He is still present today in my college life. I might not see him as often as I used to, but Fr. Brennan makes it a point —through emails or in-person events — to let us know that we are in his thoughts, that he is still journeying with us young people.”

Emails and events are one way in which Fr. Brennan continues to impact former students like Vani. But it’s in Ignatian tools — like the daily Examen — where Fr. Brennan most clearly sees the fruit of his work as a chaplain.

“One of my favourite things is to ask the kids whether they do the Examen,” Fr. Brennan says. “They’ll tell you right away. They begin to talk about it and say, ‘Oh, I thought about this or that.’ They don’t use the same language of an adult. But you can tell they’ve been thinking; it’s there. It becomes an essential part of their life.”

So essential that Vani has The Examen app on his phone.

“The Examen is a great opportunity for me to reflect on my day: the good and the bad. It helps me repent for what I did wrong and work on a better tomorrow. It’s a tool that helps develop a closer relationship with Christ.”

This desire to lead young people closer to God and into a deepening relationship with Christ has been a hallmark of the apostolic works of the Society of Jesus, from the days of Ignatius himself up to and including the current moment.

The first version of the “Formula of the Institute” of the fledgling Jesuits, drafted by St. Ignatius and his early companions, “lists ‘the instruction of young … persons in Christianity’ as a specific ministry of the Society,” writes Fr. John O’Malley, SJ, in his foundational work, “The First Jesuits.”

“The importance the nascent Society of Jesus attributed to catechetical instruction was thus typical of the era but perhaps even more emphatic. An articulation of it peculiar to the Society, for instance, was that … the fully professed members were required as part of their vow of obedience to give ‘special care for the instruction of children.’”

The early Jesuits knew the importance of accompanying young people in the development of their lives of faith — and in discovering the person God was inviting them to become. That same impulse animates the Society of Jesus today, too, most notably through the third universal apostolic preference that invites all Jesuits to journey with youth into a hope-filled future.

The early Jesuits knew the importance of accompanying young people in the development of their lives of faith — and in discovering the person God was inviting them to become.

“Youth is the stage of human life when individuals make the fundamental decisions by which they insert themselves into society, seek to give meaning to their existence and realize their dreams,” wrote Fr. Arturo Sosa, SJ — the Superior General of the Jesuits — in his 2019 letter introducing the Universal Apostolic Preferences.

“By accompanying the young in this process, teaching them discernment and sharing with them the good news of Jesus Christ, we can show them the way to God that passes through solidarity with human beings and the construction of a more just world.”

“The spiritual guidance of the staff, the faculty, and the kids in that broader sense falls on the chaplain,” Fr. Brennan says.

Accompaniment, then, goes beyond academic instruction.

“Up until I was 65, I coached football and rugby,” Fr. Brennan says. “I would say any really good chaplain should be involved in other areas of the school: theater, music, athletics. There should be some extracurricular where he is out there with the faculty, with the kids, doing the same stuff.

“When you come to being the leader or the presider in the chapel,” Fr. Brennan continues, “you’ve got a group of kids and others there who know you on another level. That adds tremendously to your chaplaincy.”

An essential role of a chaplain is meeting people where they are and journeying with them to encounter God.

An essential role of a chaplain is meeting people where they are and journeying with them to encounter God.

“Chaplaincy at MUN and anything faith-related in Newfoundland in general is like walking up a sand dune,” Fr. Mróz says, noting that faith is foreign to so many he encounters. “Chaplaincy at MUN is a joint effort with me and the Catholic Christian Outreach, which attracts students through its ‘faith studies’ and other programs. Those students often have never considered faith before.” 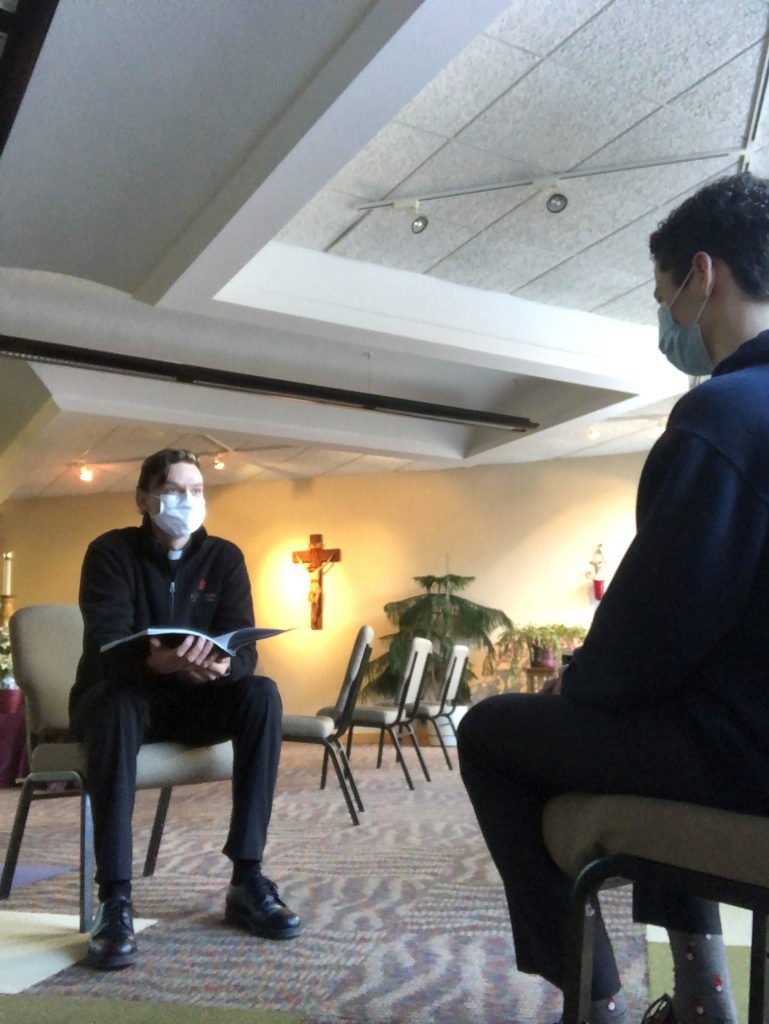 The majority of students Fr. Mróz encounters aren’t native Newfoundlanders; most are international students, with many coming from countries in Africa.

“There are two main groups,” Fr. Mróz explains, reflecting on the students he meets. “One group is looking for a faith community such as they had back home. Others don’t know what they are looking for until they find it.”

Regardless of which group they fall in, every student Fr. Mróz encounters is seeking “peace that comes through community, reconciliation with God, and finding meaning in life.”

Regardless of which group they fall in, every student Fr. Mróz encounters is seeking “peace that comes through community, reconciliation with God, and finding meaning in life.”

And, as it was for Fr. Brennan’s graduates of Loyola High School, Fr. Mróz hopes the students who pass through his doors go on to live out Ignatian principles in their lives. “I hope students leave knowing that they were created by God to be his children — and that it is possible to live this out in their daily lives.

“Life is not something that only happens to you,” Fr. Mróz continues. “You become the major agent. I hope students will be excited by an integrated faith that seeks justice, based on an understanding of Catholic social teaching and the inherent rationality of the faith.”

But how can we know — really know — that the chaplain ministry of the Jesuits is having a lasting impact on the lives of young people?

“Being a chaplain, one of the great benefits is I get to do a lot of weddings,” Fr. Brennan says with a smile. “The kids phone up and say, ‘Father, are you free?’ You’re now talking to the guys 10, 12 years later. You’re able to find out what it is they’re remembering.

“What I see, what I hear from them, is that when they begin to turn to a really significant moment in their life, and here I’m using a wedding, they stop and think about what they learned in their religion classes and at school. And they’ll go back to thinking about the resources they have, and they’ll look at their Scripture. They remember their prayers.”

Fr. Brennan adds with a laugh: “They sometimes call their old chaplain.”