Learning to Find God in all Things: Jesuits of Canada and Haiti Welcome 6 New Novices 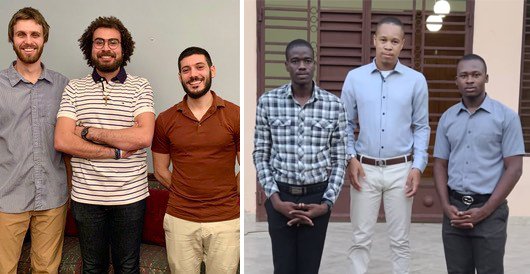 With great joy and gratitude, the Jesuits of Canada and Haiti welcomed six new novices who entered the Society of Jesus this past summer. We thank God for the great blessing of their vocation to the Society.

Nader Nasralla
Montréal, Québec
Nader, 24, earned a bachelor’s in physics from the Université de Montréal, where he worked as a teaching assistant. As an active member of the Eucharistic Youth Movement, he discovered Jesus as a friend and learned to find God in all things, which influenced his decision to join the Jesuits. Nader’s interests include acting, design, photography, cycling and reading fantasy books.

“I have known the Jesuits since my youth through the Eucharistic Youth Movement, known as EYM. EYM is an international Christian formation movement for young people, where young people are invited to make themselves and their lives in the way of Jesus, by giving daily offerings to God the Father, in a friendly, heart-to-heart relationship, based on a Eucharistic spirituality for mission.”

Samuel Pilon
Gatineau, Québec
Samuel, 24, has a bachelor’s and master’s in mathematics from the University of Ottawa, where he was a teaching assistant. He served as a middle school teacher and volunteer in Honiara, Solomon Islands, and spent this past spring planting trees in Ontario, where he lived in a tent among a group of 60 other young adults who were assisting in the reforestation of a logged area. Samuel enjoys reading sci-fi novels, bicycling, camping, traveling, winter sports and board games.

“The first Jesuit I met was Brother Guy Consolmagno, who was giving a conference on science and faith in Ottawa in the winter of 2016. At that time, I was already thinking about becoming a priest, but not yet about religious life. Later, I felt called to be a religious, and some sisters I knew recommended the Come and See weekend in Montreal. From there, I was able to begin more concretely the series of retreats and meetings that accompany vocational discernment, including meetings with Jesuits in France and Spain during stays there.”

Justin Sauro
Montréal, Québec
Justin, 26, has a diploma of college studies in liberal arts from Champlain College and a bachelor’s in political science from Concordia University, both in Québec. He worked in customer service and as a military infantry officer. A sense of dissatisfaction with the military made him realize he was being called to something different. A weekend retreat at the Jesuits’ Villa Saint Martin solidified his calling to pursue religious life. Justin’s hobbies include reading, weightlifting and video gaming.

“I learned about the Jesuits from a philosophy professor who taught at Champlain College. All the students had a deep respect for the professor, his knowledge and his teaching style. When asked how he came to teach philosophy, he proudly stated that he had been trained in philosophy by Jesuits, which immediately created a respect for the order that could produce such an engaging and fantastic teacher.”

Joassaint “Wilgenns” Bazelais
La Vallée-de-Jacmel, Haiti
Wilgenns, 21, graduated from Lycée Jean Marie Vincent in 2019. He worked installing electrical wiring in buildings and repairing telephones. He was also secretary at his parish, worked at Radio Saint Jean and lived among people with disabilities at a L’Arche community in Chantal, Haiti. Fr. Thomas Dabady, SJ, and Wilgenns’ older brother, a diocesan seminarian, both influenced his decision to join the Jesuits. His interests include basketball, soccer, reading and music.

Roodler Datilus
L’Estère, Artibonite, Haiti
Rood, 26, studied philosophy at the Institut De Philosophie Saint Francois De Sales in Port-au-Prince and social sciences at the École Supérieure Saint Ignace in Croix-des-Bouquets, Haiti. He worked for the Haitian Red Cross on a campaign to educate people on infectious diseases, which allowed him to help the most vulnerable. He also taught catechism at St. Ignatius Elementary School. His enthusiasm for Ignatian spiritualty influenced his decision to enter the Society. Rood is passionate about reading, music and soccer.

Rénaud “Titus” Morantus
Fonds-Verrettes, Haiti
Titus, 25, graduated from Collège Louis Joseph Janvier in 2018. He worked as a shopkeeper and volunteer member of the Haitian Red Cross. He was also an instructor for several groups in his parish. After a long period of discernment, reading and retreat, he felt completely drawn to the charism of the Society of Jesus. In his free time, Titus likes to read books about spirituality and play soccer with friends.

To know about all the new novices of the Jesuit Conference of Canada and the U.S., click here.

Mom, Monks, Mass: The Roots of a Vocation
After discovering the first signs of his religious vocation at a young age when he attended Mass with his mother, Fr. John O’Brien, SJ, joined the Society of Jesus in 2008.
Story
Finding one’s self through serving others
The experiences of the early Jesuits prove foundational to the formation of all Jesuits — from the earliest days to the present.
Story
From Edmundston to Kahnawá:ke: The Symphony of Father Louis Cyr
Musicologist, teacher, and Jesuit priest, New Brunswick Father Louis Cyr (1936–2020) led a life filled with multiple encounters.
Story