In a Canadian City, a Jesuit Priest Helps Native People Reclaim Their Own Spiritual Traditions

By William Bole
June 29, 2016 — If you didn’t know better, you might think that somebody photoshopped the picture of Fr. Larry Kroker, SJ. It shows the white-haired Canadian priest, in a Roman collar — sporting a large ceremonial headdress, brightly colored and flowing with eagle feathers. The image might seem a little incongruous, but it’s real.

The event captured in the photo took place five summers ago in the mountains north of Thunder Bay, a city of roughly 110,000 people in northwestern Ontario. There, Fr. Kroker was named honorary chief of a native tribe, or (in Canadian parlance) First Nation — a rare honor usually reserved for heads of state and other dignitaries. The Jesuit holds that status in the Fort William First Nation not because of the worldly power he wields, but because of what he and the Society of Jesus have done spiritually for native people. 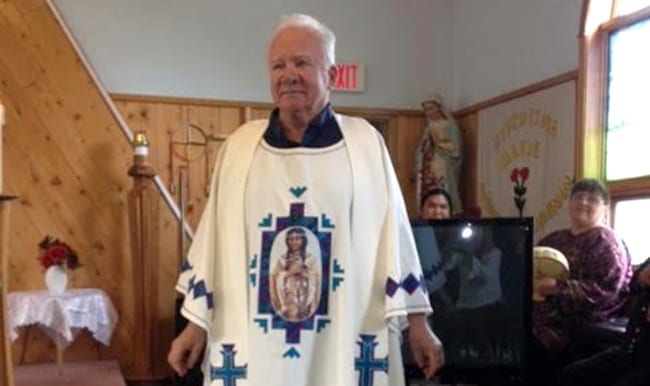 Fr. Kroker just after he was gifted with an alb of St. Kateri Tekakwitha on the day she was canonized.

Jesuits have a storied history in Canada, going back to the early 1600s when they began preaching among native people in the unexplored territory known as “New France.” Fr. Kroker is quick to point out that the order and Western Christianity in general also have an ambiguous history with those communities. He notes that the missionaries of old often frowned upon the traditional spirituality practiced by First Nations.

“It was taboo,” he says, referring to the attitude of European colonialists and many clergy who accompanied them. “It was seen as paganism.” 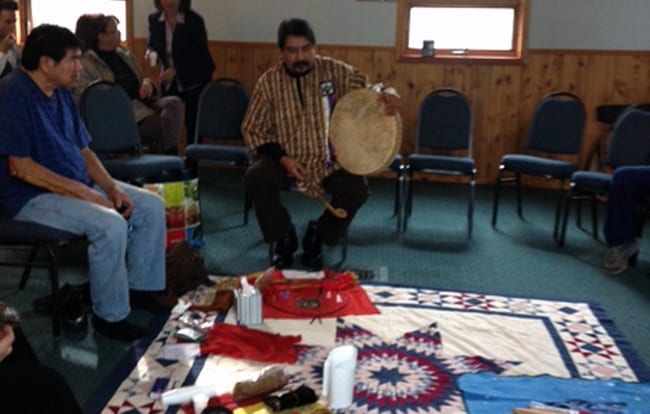 In modern times, however, Jesuits and lay pastoral workers have not only appreciated the distinctive native spirituality. They have helped native people reclaim it.

Liturgies offer a glimpse into changes that have come to predominantly native parishes operated or otherwise served by Jesuits. For example, phrases and gestures during Mass are punctuated by solemn drum beats, in keeping with the sacred ceremonial practices of native communities. Also featured in many liturgies is a purification ritual known as smudging. Medicinal herbs such as sage are burned, and feathers guide the sacred smoke across the congregation.

The seeds of these and other innovations can be traced to the Second Vatican Council (1962-1965), which called for an array of reforms in the Catholic Church, including greater roles for the laity. Fr. Kroker recalls that at the time, Jesuits inspired by the Council began asking, “Why shouldn’t the native people be spiritual leaders of their own communities?” 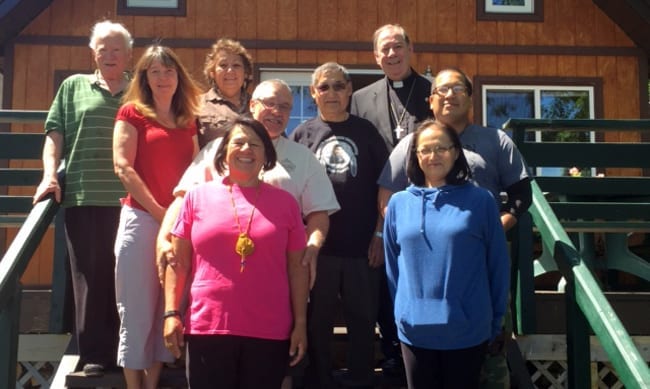 Fr. Kroker (back row, far left) on retreat with members of the Native Diaconate Program, shortly before the ordination and commissioning of Deacons and Ministers of Service in 2015.

In the early 1970s, the order began encouraging First Nation Catholics to take greater ownership of their parishes and ministries. A team of Jesuit priests — Fathers Michael Murray, Dan Hannin, and James Farrell, in addition to Fr. Kroker — went from village to village in northwestern Ontario. They offered training for the diaconate, an ordained ministry open to married men in the Catholic Church. Their workshops, which also involved the wives of would-be deacons, dealt with subjects such as Scripture, theology and pastoral ministry.

Eventually the scope widened. The priests began training lay men and women for other parish ministries, including how to teach the Spiritual Exercises of St. Ignatius Loyola, founder of the Jesuits. This form of spirituality puts the accent on “finding God in all things,” and has a striking affinity with the native way of seeing the Creator present in all of nature.

The “Next Stage of My Ministry”

Fr. Kroker had grown up in Thunder Bay. His mother was French Canadian; his father, of German descent. During his years of Jesuit training (typically a decade), he was assigned a couple of times to teach Latin and English at Jesuit high schools in Montreal and Toronto.

“I came to realize that teaching high school was not my vocation,” the priest says. “I was not a natural teacher in that context. And I guess it’s not why I became a priest.” Fr. Kroker’s formation program also included stints as a pastoral minister in native parishes, “where I seemed to fit in very well,” he recalls. About a year after his ordination in 1971, he decided that priestly ministry in that setting was his real vocation.

For many years he bounced around parishes in First Nation communities. Fittingly, the aboriginal name that came with his honorary chief designation in 2011 was Aski Shabwaweshkang — “He who goes everywhere.” But long before then, Fr. Kroker had settled in as pastor of St. Anne’s Church, located in the Fort William First Nation territory adjacent to Thunder Bay.

Shortly after arriving there in 1988, Fr. Kroker had a conversation with a native lay woman that helped trigger what he calls “the next stage of my ministry.” The pastor had gone many times to Grace Esquega, asking for her help with different ministries and programs. But Fr. Kroker relates that on this occasion, Esquega told him: “Once we come to grips with who we are as a native people, you won’t have to ask us to do ministry and help out. We’ll come and ask you to help out.”

The notion struck him. 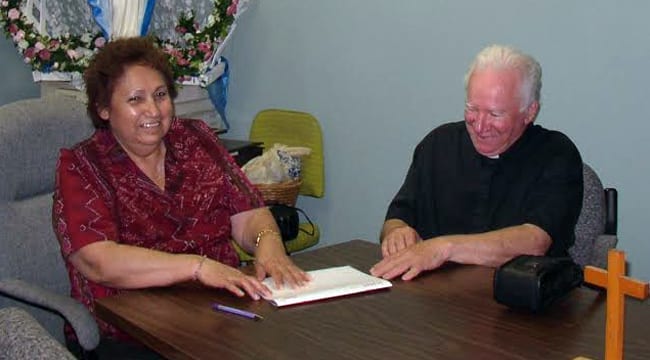 Fr. Kroker and others began thinking of ways to heighten the level of native leadership in Catholic parishes. The result of this discernment was, in 1996, the formation of Kitchitwa Kateri Parish in Thunder Bay, which serves native people who have migrated to or are visiting the heart of the city. The parish is dedicated to Saint Kateri Tekakwitha, the so-called “Lily of the Mohawks” who was born in 1656, in what is now New York State, and canonized by Pope Benedict XVI four years ago.

More to the point, native leaders of the parish now come to Fr. Kroker asking for his help with their ministries.

At Mass, congregants often sing the “Our Father” in Ojibway, the indigenous language of the Fort William First Nation. In addition to practices such as smudging and solemn drumming, the liturgies incorporate traditional native beliefs. For instance, at the start of Good Friday services this past April, presiding priests made the ritual declaration: “Today we celebrate the death of Jesus on the Cross, the Tree of Life as it is called in the native tradition. The Sacred Tree … is firmly rooted in our Mother Earth and draws nourishment from her. It reaches upwards to the Creator.”

Fr. Kroker says that other predominantly native parishes in the area — including St. Anne’s, where he remains as pastor — have gradually adopted these liturgical innovations. “They want to get back in touch with their spiritual traditions,” the Jesuit explains. “They’ve come to grips with who they are.”