October 17, 2017 — In the fall of 1991, Erik Oland, a classically trained opera singer, stood on stage in Ottawa and performed his dream role — Papageno in “The Magic Flute” — a historic performance commemorating the bicentennial of Mozart’s last opera. The young singer pinched himself, certain that life would never get better. And then it did: Oland became a Jesuit. 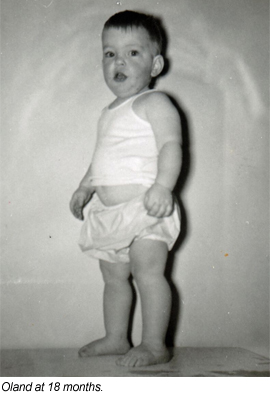 As a child growing up along the Kennebecasis River in eastern Canada, Oland was captivated by music. His neighbor, a retired opera singer, held regular music salons, and 6-year-old Erik would perch outside her window listening to quartets and arias before singing his way home.

Soon, Oland was making the 30-minute commute to attend high school in Saint John, New Brunswick, attracted by the school’s standout music and drama department. He played a gang member in “West Side Story” and the starring role of Lancelot in “Camelot.” Remembering the performance 40 years after the fact, his rich baritone fills the room as he breaks into Lancelot’s signature ballad, “If Ever I Would Leave You.” Take that, Robert Goulet.

At Mount Allison University in New Brunswick, Oland earned a bachelor’s degree in music while performing on Canadian radio and television shows. After graduation, he joined a small opera company before being plucked up by the Canadian Opera Company in Toronto and L’Atelier lyrique de l’Opéra de Montréal, performing in European capitals and across Canada. There were heady moments like the time he was seated next to Princess Diana at a luncheon for emerging artists. And yet, something was missing.

As his 30th birthday approached, Oland questioned whether he wanted to perform exclusively for the rest of his life. Asking that question, he says, “opened up a space inside me.” And then, a moment of serendipity and grace: a scheduled tour was cancelled at the last minute, leaving Oland with a whole month free.

“I found myself with this chunk of time at the last minute and thought ‘maybe this is a gift from God.’” He picked up a do-it-yourself manual of the Spiritual Exercises, a set of meditations, contemplations and prayers written by St. Ignatius of Loyola, the founder of the Jesuits. Acting as his own spiritual director, Oland methodically went through the Exercises, paying careful attention to the part where St. Ignatius invites self-reflection. The light went on, he recalls. “I think I might be called to religious life.”

His Jesuit vocation “unlocked,” Oland went from professional opera singer to Jesuit novice in a matter of months. “I didn’t worry about missing music — the decision felt so right.”

Oland’s formation took him from studies in Ireland to a training program in the Spiritual Exercises back in Canada to several months in Jamaica. There, he worked alongside Fr. Martin Royackers, SJ, a Canadian Jesuit whose advocacy for the rights of Jamaica’s poor hill farmers made him the constant target of death threats. When Fr. Royackers was murdered a few years after Oland’s time with him, Oland accompanied the Provincial who broke the news to the Jesuit’s family. “It was a tremendous experience to work with this man who had such a deep commitment to the poor.”

After earning a Master of Divinity degree from Regis College at the University of Toronto and a Licentiate in Sacred Theology from the Weston Jesuit School of Theology in Cambridge, Massachusetts, Oland was ordained in 2003. His first real assignment as a Jesuit priest brought him back to something that inspired his vocation: The Exercises. Working at a retreat center in Guelph, Ontario, Oland combined his love of music and Ignatian spirituality. “There’s something in music that can be prayerful but can also lead us to prayer, so when the music stops you find yourself in this spaciousness where we can have a very deep encounter with God.”

After working as a retreat director, he served for nine years as a novice director: “I taught them all to sing. It’s all about breath control.” In March, he began his new role as Provincial of the Jesuits’ French Canada Province.

Based at the Province headquarters in Montreal, Oland is grateful to be immersed in French Canada’s vibrant culture. “I call myself a Francophile. I love history, and my own roots go back to the origin of the country and the early French. I’m deeply appreciative of the richness of a broader culture.” 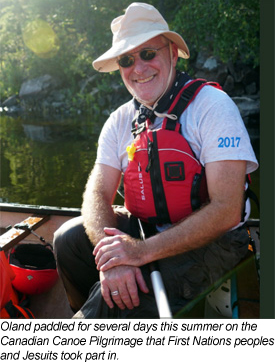 About his new job, Oland says, “Even in the early days of being Provincial, I realize that the recompense of this work is going to be the one-on-one conversations I will have with my brother Jesuits. Knowing that I can dialogue with an individual about his life, his desires, his sorrows and his challenges is life-giving for me.”

Though he’s only been on the job a few months, Oland has already traveled twice to Haiti, part of the French Canada Province where there is a vibrant and growing Jesuit presence. “Haiti has suffered so much and yet we find ourselves with many vocations — I think the Holy Spirit is speaking here. There’s a desire for the people of Haiti to do something for the country, and there’s something about the charism of the Society that has touched the hearts of a number of young Haitians.” And that’s music to his ears. 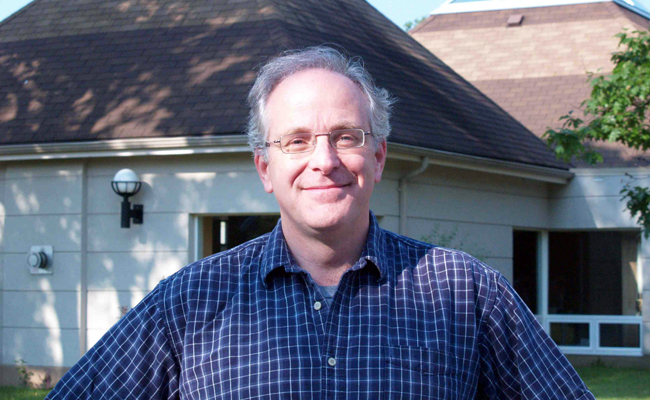 So too is his Jesuit vocation. “Yes, I had this wonderful life and the opportunity to perform with very gifted people, but it was really a very narrow existence,” Oland says. “The individual Jesuit’s life of personal prayer, where you’re always looking at how you’re living your life, always coming back to your center — which is where God is — that’s how you grow.”

About the joint review of Canadian Catholic Organization for Development and Peace’s international partner organizations
We are deeply saddened to learn that so many CCODP partners are losing this vital support from CCODP.
Story
Ordinations in times of pandemic: Society of Jesus welcomes new priest and five deacons in Toronto
May 25, 2020 – In two of the more memorable and elegantly simple ceremonies in recent history, Terrence Prendergast, SJ, Archbishop of Ottawa-Cornwall, ordained 5 deacons and Kevin Kelly, SJ (CAN), to the priesthood.
News
Jesuit Superior General appoints Father Erik Oland as the First Provincial of a New Canadian Jesuit Province
The Superior General of the Society of Jesus, (Jesuits), the Very Rev. Father Arturo Sosa, SJ, has appointed Fr. Erik Oland, SJ, as the first Provincial of the new Jesuit Province of Canada, effective July 31, 2018.
Story