Finding one’s self through serving others 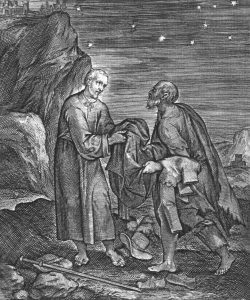 The Spanish Jesuit priest, Jerome Nadal, companion to St. Ignatius of Loyola himself, wrote this of the Jesuit way of life: “The form of the Society [of Jesus] is in the life of Ignatius. … God set him up as a living example of our way of proceeding.”

This way of proceeding ,embodied in Ignatius, is alive and well in the Jesuits of today, passed on through the rigors of Jesuit formation. A hallmark of these formative eight-to-twelve years are apostolic experiences or — a better translation of Ignatius’ Latin word experimentum — experiments.

“There is a unique intuition that Ignatius had that colours everything about why we have and use apostolic experiences,” says Fr. Gilles Mongeau, SJ, socius of the Canadian Province. “He reflects on his experience, his development, and that of his founding companions.”

Those experiences of the early Jesuits prove foundational to the formation of all Jesuits — from the earliest days to the present.

“Ignatius selects certain realities that the early companions lived and codifies them into these experiments because he realizes that they made a unique contribution to their group becoming who they are. That’s the thing that has to be reproduced in future generations.”

“There is a unique intuition that Ignatius had that colours everything about why we have and use apostolic experiences,” says Fr. Gilles Mongeau, SJ, socius of the Canadian Province. “He reflects on his experience, his development, and that of his founding companions.”

“These apostolic experiences are as much for the person to discover something or to have something revealed to them about themselves, as they are for the Society to see something happening in them.”

“The hospice experiment,” Fr. Mongeau says, “is meant to reveal a desire to be personally close to the poor.” Recalling that hospitals were places for the indigent and the dying in the time of Ignatius, this experiment is a call to be “in intense and intimate company of the poor and marginalized — you’re entering into relationship with them.”

Another typical apostolic experiment requires the young Jesuit to serve his Jesuit community through manual tasks around the house: cleaning the bathrooms, scullery duty, and more.

“It’s an experience of giving oneself freely at a humble task. To do it in true humility and generosity and availability. These are all values that are significantly at the core of Jesuit identity.”

Perhaps most well-known of the apostolic experiments, most often experienced in regency, is education — it’s not uncommon to find a young Jesuit at the front of a classroom. For Ignatius, though, this experiment isn’t just about teaching classes.

“The key,” Fr. Mongeau says, “is accompanying people where they are in their faith life and being able to accommodate oneself to that.” It’s about “trying to communicate in a living way the richness and the liveliness of being Christian.”

Finally, there’s the pilgrimage experience, where a Jesuit novice is sent out into the wider community. “Without money, begging for shelter and food for a period of a month (though the length of time can vary) — it’s really about radical reliance on God’s providence alone.”

This experiment, above all, embodies “the genuine poverty Ignatius envisions for the Society.” This is the kind of poverty that is, as Fr. Mongeau puts it, “the mother and the bulwark of our vocation.”

For the Jesuit novice, these experiments are a call to conversion: “conversion into the specific charism of the Society, which has this poverty, this radical availability, this humility, this generosity at its core.”

“The key,” Fr. Mongeau says, “is accompanying people where they are in their faith life and being able to accommodate oneself to that.” It’s about “trying to communicate in a living way the richness and the liveliness of being Christian.”

Subsequent apostolic experiences — particularly those lived out in subsequent stages of formation, like regency — invite the young Jesuit to reflect on whether or not he can flourish in this kind of life.

“Is the rubber hitting the road?” Fr. Mongeau asks. “Is this man showing himself to be a contemplative in action in the way that the Society expects? Does he live a joy-filled Jesuit life?”

For Oliver Capko, SJ, serving his second year of regency as a teacher and campus minister at St. Paul’s High School in Winnipeg, a key question at the heart of his regency experience is: Who am I?

It’s a question “answered in the simple reflection on the gifts for God that I can bring — and enjoy bringing — to students,” Capko says. “It is amazing to see the students and myself thrive as we journey on the path to God. That sharing of self is where my vocation is found.”

The life and legacy of St. Ignatius still guides the work of these apostolic experiments; on one level, very little has changed since the saint’s day. But the context within which these experiments take place is radically different.

Many novices, for example, have spent time with differently abled individuals in L’Arche communities or accompany the people served by the Little Sisters of the Poor or the Missionaries of Charity.

“It’s not so much that it’s the healing or death-dealing situations of the hospital that’s important as that those extreme situations create a level of immediate encounter,” Fr. Mongeau reflects. “It’s not abstract closeness to the poor; it’s relationship, friendship, intimacy.”

So, it’s up to the novice director — the Jesuit in charge of forming young Jesuits — to understand both the purpose of the experiment and the needs and abilities of each individual Jesuit.

Erik Sorensen, SJ, who did his regency at Loyola High School in Montreal, was particularly affected by his role as the robotics team moderator.

“This task invited me to bring together my own background in engineering with my desire to be a witness to the Gospel,” he says. “It challenged me to reflect on how I was called to incarnate the message of the kingdom of God in a situation where it might not necessarily be heard.

“This experience,” he continues, “has prepared me to bring the Gospel message into whatever situation I may find myself as a Jesuit.”

“What role does a particular Jesuit’s individual discernment play?” Fr. Mongeau asks. “It’s not just a question of what do they desire, but who are they? How far can they be stretched? You don’t want the experiment to be destructive; you want it to be as fruitful as possible.”

St. Ignatius reminds Jesuits past and present to do all things for the greater glory of God and the good of all people. Ultimately, apostolic experiments succeed when they live up to this, the saint’s vision.

This article is part of our newest magazine.