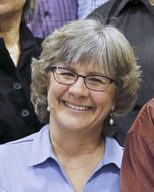 “I have often identified myself as an orchestra conductor. As the director of an organization whose team is made up of extremely talented, extremely competent, very dedicated people who are passionate about social justice, I have made it possible for each of the instruments, each of the people on the team, to harmoniously complement each other as often as possible.” This is how Élisabeth Garant sums up her work over the past 15 years as executive director of the Centre Justice et Foi (CJF), a position she will soon be leaving.

She will be replaced by Oscar Benavides-Calvachi, of Colombian origin, who has had legal training and experience in human rights work. Until recently, he was the coordinator of Projet Accompagnement Québec-Guatemala.

In a generous, lengthy interview, Ms. Garant shared some of the highlights during the evolution of CJF over a period of almost three decades.

How did you move from the “cultural communities sector” to the leadership of the CJF?

I have been with the CJF for almost 27 years now. I started in a part-time position at a time when the “Vivre ensemble” (Living Together) sector was called the “Communities” sector (this expression refers to another way of approaching immigration issues in Quebec and at the CJF). I worked for twelve years as the coordinator of this sector, a position that eventually became full-time. I had been working on an issue that I was already passionate about: immigration. It must be said that when the CJF was created, Julien Harvey, SJ, had the intuition, which turned out to be correct, that the issue of immigration would eventually become a crucial issue in terms of reflection, awareness, and advocacy, especially for the francophone population of Quebec, which was not very interested in the issue at the beginning of the 1980s. This became increasingly true from the moment I took office in the mid-1990s.

“It must be said that when the CJF was created, Julien Harvey, SJ, had the intuition, which turned out to be correct, that the issue of immigration would eventually become a crucial issue in terms of reflection, awareness, and advocacy, especially for the francophone population of Quebec.”

Quite quickly, I wanted to do more (explore more themes, organize more public events). This allowed me to introduce the dimension of international migration into the Vivre ensemble sector, a dimension that includes the protection of refugees (at the time, the Jesuit Refugee Service had not yet been established in Quebec) as well as migrant rights, whose status was precarious, and to link these questions with the reflection on “living together.”

The opportunity to replace Director Jean-Marc Biron, SJ, arose after I had worked as a coordinator for 12 years, when I was ready for another challenge. I have been the director now for 15 years.

So I have lived 27 of the centre’s almost-40-year history. It is also 27 years of collaboration with the Society of Jesus, in the province and, more specifically, in Jesuit life in Quebec.

What are the major elements that stand out for you during these past 27 years?

First, I wanted the work of the Vivre ensemble sector to be better recognized in the larger body of our work because it had previously been known to the public almost solely through the publication of Relations magazine. This has taken time. At first, I felt that it was important to offer the coordination of the Vivre ensemble sector to someone who had experienced the reality of immigration. It was an intuition, but with time it became clear: the choice to name Mouloud Idir as coordinator of the Vivre ensemble sector had an enormous impact. This allowed us to give a greater voice to people who had a lived experience of exile and immigration in another society and to address the issues of living together from their reality. Issues of racism have also occupied a much more important place in our work, which required a lot of audacity ten years ago, when the CJF was the first institution in Quebec to explicitly address Islamophobia and to initiate a reflection on the subject. The arrival of Élodie Ekobena as a new member of the Vivre ensemble team has allowed us to continue in the same direction. The team deserves full credit for having succeeded in doing what the sector is doing now and for having introduced a different type of reflection on and way of speaking about the challenges of pluralism within the context of community organizations in Quebec.

“Issues of racism have also occupied a much more important place in our work, which required a lot of audacity ten years ago, when the CJF was the first institution in Quebec to explicitly address Islamophobia and to initiate a reflection on the subject.”

The other obvious change is that there is a laywoman in this role, even though from the founding of the CJF, the early Jesuits took to heart the issue of the “status of women,” as it was called then. This has led us to engage more with the issues, language, and analysis that are closer to the feminist movement, along with other important issues in the life of the CJF.

Finally, I would say that the element that seems to me most important in these last years is the experience of fully belonging to a Jesuit work, even though we are now an almost exclusively non-Jesuit team. For all these years, the CJF has been seen and known as a Jesuit religious organization and we have succeeded in gaining the trust and credibility of the Quebec social movement in general as partners in many struggles and debates.

What impact has the CJF had over the past 15 years under your leadership?

This is a difficult question: it is not easy to measure the small contribution that we bring to some specific struggles!

I think the centre has been at the forefront of some issues that are critical today, such as ecology or the Indigenous question.

I remember the first public events on these issues when we had difficulty mobilizing even just a few dozen people, whereas today it is not uncommon to gather a large number of people who come to listen, to reflect, and to talk about the Indigenous issue in particular. It is a concern, like the ecological issue, that can no longer be ignored. This does not mean that these social and political issues have been resolved, far from it, but we may have contributed to raising awareness about these topics.

“I think the centre has been at the forefront of some issues that are critical today, such as ecology or the Indigenous question.”

The same is true for issues related to living together, particularly questions related to Islam. Here again, there is still a long way to go, but we have put in place reflections and facilitated discussions and debates that I believe have been fruitful.

But we have also had our setbacks. When I began 27 years ago, I was faced with the issue of secularism. For the first twelve years, I had the impression that I was really helping to create a model of secularism in Quebec that could have a different influence on the way we live it. And I leave at a time when everything is the opposite of what I had hoped.

I would say that the anniversaries (from the 70th to the 80th) of Relations magazine were very beautiful moments. The magazine’s production team (then composed mainly of Jean-Claude Ravet, Catherine Caron, and Emiliano Arpin-Simonetti) was at the peak of its experience and energy. It is fascinating to think that we are one of the teams that contributed to this history, an exceptionally long history for a francophone publication published without interruption in Quebec. And I am impressed with the quality of the content and the beauty of the presentation of the magazine; a remarkable feat that such a small team manages to achieve with each issue.

Among other beautiful moments, I am quite happy with the exhibition QuébécoisEs, musulmanEs… et après? We expected to present this exhibition of 24 photos twice, and in the end, the exhibit—that now includes 40 photos that were generated through awareness-raising initiatives in several regions of Quebec—was presented 60 times throughout Quebec.

What is the future of the CJF?

We should never consider our institutions to be eternal, but I believe that the centre still has much to contribute and that the people who make up the team still have much to offer. In a small organization, the future is never assured, and I hope with all my heart that the Jesuits will continue to feel that they need such centres, as an expression of their presence and mission.

“I think that my successor comes at a good moment in this time of transition, as we try to make the CJF a space for younger people to reappropriate the history of the commitment of a Christian social movement in Quebec, but also to reimagine their own commitment in a different way.”

Looking back, I consider that I may have been a transitional leader. I knew the earlier Social Gospel network well enough to follow the CJF in its new developments and initiatives. A new stage is beginning with my successor, Oscar Benavides-Calvachi, who comes with an experience of commitment to social justice in the name of his Christian faith that is extremely rich and courageous but different from mine. I think that my successor comes at a good moment in this time of transition, as we try to make the CJF a space for younger people to reappropriate the history of the commitment of a Christian social movement in Quebec, but also to reimagine their own commitment in a different way. I see this very much through the project “The Future of the Social Gospel in Quebec,” which Ariane Collin has been coordinating for three years now. She has opened up new avenues of exploration for young people and, with the help of Frédéric Barriault, has created a virtual commemoration of the Social Gospel in Quebec (mcsq.ca).

Fifteen years is a long time to be leading an organization, so it’s always good to have an opportunity for a fresh and different perspective. I feel it is the right time for me to step down and find other ways to support the CJF whose team and mission I still admire.

Thank you, Elisabeth. It was a pleasure to do this interview and to be with you. Have a good rest, and good luck with new projects!

Anchoring oneself to reach out to others
For Fr. Michel “Jim” Lefebvre, SJ, we are men and women for others, first of all, by listening to those closest to us.
Story
Pope Francis’ upcoming visit to Indigenous Peoples: Its importance and what it means for reconciliation [Interview]
Father Peter Bisson, SJ, Assistant to the Jesuit Provincial of Canada for Indigenous Relations, puts the Pope's visit in context.
Story
Etched on paper and hearts: Marcel Lapointe, SJ
Marcel Lapointe: Jesuit, artist and teacher, an exceptional person, gifted with real and deep listening skills and an uncommon friendship
Story