Building community at home and abroad 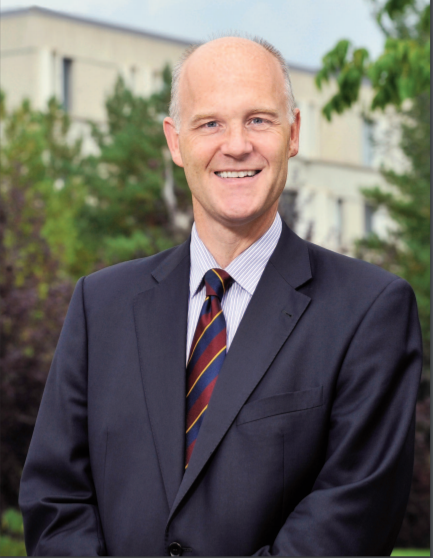 John Meehan’s age may be deceiving. At 46, his vast experiences portray an individual with many more years behind him.

He has studied in France, England, and the United States, lived in several cities around the world, served in the Grenadier Guard, volunteered for L’Arche international, earned four graduate degrees, taught English and Russian in Japan, worked in various capacities with the poor and marginalized, published two books and numerous articles, and, on July 1, began a five-year tenure as Campion College’s seventh president.

However, through all these vast experiences the one common link stems back to his childhood home of Antigonish, Nova Scotia. “Antigonish is a place where there is a strong community, much like Regina in that sense. Every place I have been since then, I’ve tried to create that sense of community. That has been a constant thread in my life. Wherever I’ve studied, wherever I’ve worked, I always look for the same sense of community,” says Meehan. It is the community atmosphere at Campion that Meehan plans to build upon while at the helm of Canada’s only Jesuit undergraduate university college.

“One of Campion’s greatest strengths is the sense of community one feels as soon as you enter the building. For me, the next logical step in that mission of building up our community within Campion is to build our ranks within the wider community. In a way, it goes back to my childhood in Antigonish where the university was a connection to the wider world,” says Meehan. While Meehan credits St. Francis Xavier University in Antigonish for bringing the world to his hometown, it was the acquisition of a short-wave radio that first sparked an interest in traveling abroad. “I started to listen to radio reports throughout the world, and by the time I was 15, I had decided to spend a year abroad,” recalls Meehan.

Through his experience living and studying in France, Meehan developed an interest in learning new languages, and now is able to converse in both of Canada’s official languages as well as Russian and Japanese. He also speaks a little Spanish and Italian. Meehan returned to Nova Scotia to complete his grade 12 before heading off to McGill for undergraduate studies where he earned a BA in history and Russian studies. He went on to receive a Diploma in theology from Magdalen College at Oxford University, a Master in international relations from The Johns Hopkins University in Washington, DC, and a PhD in history from the University of Toronto. Meehan also holds a Master of divinity and Master of theology from Regis College at the University of Toronto.

Well poised for a career in international relations, Meehan admits: “At the time, I thought it would probably be in the Canadian Foreign Service.” However, an eightmonth stint volunteering for L’Arche International in Trosly-Breuil, France, would eventually lead Meehan in a different direction. It was here that he met Jean Vanier and came to know the Society of Jesus (Jesuits). “I was impressed by the Jesuits whom I met there. I knew priests before, but these Jesuits seemed a bit different— in a good way. The first thing that struck me was their sense of humour. They could laugh at life and themselves, but yet they were serious about their commitments, serious about changing the world and society. They were spiritual, but at the same time very much at home in the world and involved in the world. They were intellectual and intelligent, but also very grounded. It seems like a paradox, but getting to know these guys, I was intrigued and I wanted to learn more about the Jesuits. I continued on with my studies, but this whole Jesuit calling never really left me,” recalls Meehan, who joined the Jesuits in 2000 and recently completed his final formation (tertianship) in Ireland.

Meehan regularly taught at Campion and served in its Campus Ministry office throughout his formation, beginning with a two-year term in 2001, then from 2004 to 2006, and for the 2011-2012 academic year. During his tenure as president of Campion College, Meehan will continue to teach courses in history and Catholic studies, and conduct research in his main areas of study: the history of Canadian foreign relations, Canadian relations with East Asia, Asia Pacific studies, Jesuit history, and the history of Christianity in Asia.

Meehan’s interest in Asia began after completing his undergraduate studies at McGill. On a trip to Asia in 1990, Meehan found himself in the center of Beijing one year after protests in Tiananmen Square ended by military force. “It was a trip I will never forget because you could still feel the tension in the air; you could still see the bullet marks on the monuments in the square. I just had a sense of arriving in Asia that this is a whole new world and culture that I knew nothing about,” says Meehan. When it came time to select a thesis topic for his PhD, Meehan reviewed his areas of interest and quickly realized that, in the field of Canadian foreign relations, not much had been written in regards to the history of Canada’s relations with Asia. “I look at  this region and the relationship tends to focus on trade and economics, which is very important, but it has to be more than that because we have to understand the history of the human relationship with this part of the world,” explains Meehan.

Meehan’s first book, The Dominion and the Rising Sun (UBC Press, 2006), received the Prime Minister’s Award from the Canadian embassy in Toyko, and has been translated into Japanese. His second book, Chasing the Dragon in Shanghai (UBC Press, 2011), shifts westward to look at Canada’s early relations with China. In 2011, Meehan, together with University of Regina professors Philip Charrier and Dongyan Blackford, co-taught a course titled Changing China, which included a travel component to the cities of Beijing and Shanghai. Meehan believes this hands-on approach to be a very valuable learning experience as it not only provides an opportunity to apply knowledge acquired in the classroom, but also a chance to gain a real understanding of another culture.

“Regina itself has become international. You only need to look at events like Mosaic or organizations like the Multi Faith Forum to realize this fact. When I look at the international experience that I benefitted from, that is something that I would like to have Campion provide to its students. Really, we are forming them to be global citizens. Whether they work abroad or not is another story, but they will be prepared to work in a world that is global,” says Meehan. To adequately prepare students, Meehan plans to focus on two areas: the first is to ensure that students receive the highest standards in a liberal arts education, and second is to focus on the Jesuit identity of the College by connecting with the larger Jesuit network of universities and colleges.

“My dream for the students at Campion is that when they come to the College they will discover a whole new world of disciplines and different subjects to study. But also that they will be connected to the wider world—the world outside the university—by getting involved locally or internationally. In a sense, what I hope for the students at Campion is that they become global citizens, because that is the world we live in—an interconnected, international village,” says Meehan.

Father John Meehan, SJ in Montreal: the Church in Quebec is not dead; far from it!
A high-level intellectual, a historian by training and ex-President of Campion College, Father John Meehan, SJ arrived a few months ago in Montreal, where he joined the Jesuit community at the Residence of the Holy Name of Jesus.
Story
Jesuit Formation 2.0: The Future of the Jesuit Province of Canada
The Jesuit Conference of Canada and the United States, is currently planning the renewal of its formation process. Young Jesuits in the new province will be formed in such a way that the different learning components will be even more integrated.
Story
An interview with Dr. Susan K. Wood, Regis College’s first female Academic Dean
February 10, 2020 — “Theology is never practiced in a vacuum, but always in a specific time and place. This time and place is the modern world.” Sister Susan K. Wood, first female Academic Dean of Regis College, agreed to talk with us briefly about her career path, her projects and her vision of the Church.
News