Building Bridges Between Faith and Secular Society: The Experience of “Relations” 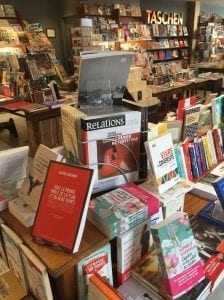 “It’s a challenge for believers to formulate their ideas in ways that non-believers can understand them, and vice versa. But we have shown that it is possible, nourishing and inventive,” said Jean-Claude Ravet, the former editor-in-chief of the Relations magazine, published by the Centre justice et foi. Free and independent, this magazine offers a critical look at the major social, cultural, economic, political, environmental and religious issues of our time in dialogue with Quebec’s secular society. But how can a magazine founded by Jesuits present itself as a relevant voice today?

In this interview, Mr. Ravet discusses the importance of building bridges between faith and secular society. According to him, they can be built by bringing relevant and unique perspectives to social debates.

What place does faith have in today’s society?

One significant challenge is being close to everything that is happening in the world. Faith is fundamentally open to the world, but the world often shakes our faith, makes us grow with every challenge and pushes us to be attentive.

So, I think that the Christian faith is very relevant in both society and in social analysis. And in all the upheaval we are seeing in today’s world, the importance of keeping faith alive and relevant is a fundamental issue.

We live in a society where a certain cynicism—or, conversely, a certain powerlessness or indifference—is taking hold in response to the different crises that are going on. Faith has something to say in this context. Hope and hopefulness are woven into its very fibres, along with a commitment to life. It’s about standing tall against fatalism, against the forces in society which seem immutable and giving attention to the poor, to life, even when death takes hold or when the structures which suffocate everything seem untouchable. It’s in these moments that the seeds of life have to keep hold of their vitality and faith has a lot to say about that.

Why is it important for Relations to position itself as a religious work in a secular society?

There is a movement in society which attempts to pit believers and non-believers against each other by caricaturing religious people as archaic, outdated and uninterested in social or political life. This caricature is sad for a society, but it is making its way around and is a challenge to overcome. Another challenge is being a part of society and giving a voice to those who do not have one. We embrace these challenges, for example, at Relations.

On the one hand, a fundamental dimension of Relations is that it is the only magazine published by a religious community available in newsstands across Quebec. We need to keep up this presence, this credibility, and maintain our connections with the media, who pay attention to the voice of Relation because we are a social voice coming from the fertile soil of the Gospel.  For example, every issue Le Devoir asks us for a column called “Des idées en revue.” It’s interesting to feel this appreciation, this recognition of a Jesuit work within Quebec society. Even if sometimes people who like Relations magazine feel a little uncomfortable with the fact that it’s a Jesuit publication (since we live in a climate of resentment towards the religious), they know to recognize its value and the essential contribution that the magazine brings to the public debate.

On the other hand, one of the objectives of Relations is to bring attention to issues that have previously been ignored. We have to bring intellectuals who empathise with marginalized people together with those who are the object of our particular attentions, so that the latter can become the protagonists of the magazine.

Finally, another aspect of the magazine is our connections with artists and writers. It’s the intuition which Jean Pichette had as editor-in-chief in 2000 and which still motivates us: to connect the magazine with an artistic and literary sensibility. There are few others like us who bring together political analysis with artistic creation, as another way of seeing the world. Being sensitive to kindness, helping one another and art is a fundamental element in this empathy, this sensibility. The response from artists is encouraging, because even if we do not have the means to pay them what they are worth, they do it in recognition of the work that Relations is doing and because, for them, it’s also a way to engage with society. This shows that art has something to say for all of society.

How exactly can we build these bridges between religion and secular society?

At Relations, we do this work, for example, through our column “In the footsteps of Ignatius,” where Jesuit collaborators have an openly Jesuit space where they can make their commitments concrete. It’s a way of maintaining a presence in the public debate in a way that is for the common good and not for the good of the Society.

Equally, we make connections to the big societal questions. We spoke recently on the proposed bill to eliminate school boards, in which we spoke about many things, but not about the marginalisation of the spiritual dimension. Our positions are not made smoothly. We were heavily criticized for our position on State secularism: some people unsubscribed and expressed their disagreement. It takes courage to still hold a stance that sets you apart. For example, our distinct voice of leftist believers which upsets the Left.

Finally, how can people of different faiths collaborate on the same project?

Our team is a bit like a laboratory for what we propose in the public forum. What unites us is precisely what we present in our magazine: this fundamental solidarity between people of different faiths who, even in their differences, find similarities in their thinking. We all have the same sensibilities when it comes to social issues, our projects for society and for the kinds of human and social relationships that we want to promote and which we see as fundamental to develop. There are many affinities, and, through our different points of view, we are able to form a common community and ideas.

How do you feel as a layperson working for and with Jesuits?

I joined the team at the magazine (twenty years ago) at a moment where there were very few Jesuits. I felt that the magazine was like a ripe fruit in the hands of laypeople. The whole history of Relations had been actively crafted by the hands of the Jesuits, then it was taken over by laypeople—including women—in the 80s. That shows the openness of the Jesuits to all aspects of Quebec society, an openness to social movements which permeates Relations. This paved the way for a magazine which is directed by laypeople, which pays careful attention to what was done historically, with a deep attachment to justice, an evangelic attention to the marginalized and an outlook on society guided by this care and attention. When I arrived, I felt like a stakeholder in this Jesuit project that was trying to open up a social debate. Even today, Relations remains a fundamentally Jesuit work.

This connection between secular and Jesuit projects is therefore very interesting and shows that Jesuits are aware of their proximity to Quebec society, even if it is difficult to find a way to enter into dialogue and keep a religious voice alive in a society where certain elements are still actively against religion.

I believe that the role of the Jesuits, acting through laypeople, is to carry this voice over the walls that have often been built in a fairly arbitrary way. We have to deconstruct their prejudices and misgivings and maintain this connection with society. The entire challenge is to insert Relations back into the public space and offer it to new generations as a place for debate and a tool for understanding the world.