April 27, 2015 — Nineteenth-century missionaries arrived in Africa with a Bible in one hand and a plow in the other. Jesuit Brother Paul Desmarais still has a Bible, but he’s given up on the plow.

No-till farming means exactly what it says. Rather than running a plow through the land before seeding, no-till farmers go directly to seeding — leaving the microbes and worms, which make the soil rich, undisturbed. Unplowed land absorbs more carbon, retains more water and needs less fertilizer. 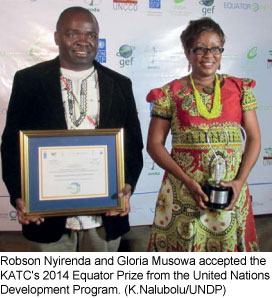 In May 2014, Kasisi was chosen as one of 25 outstanding sustainable development initiatives around the globe by the United Nations Development Program. The UNDP’s Equator Initiative singled out Kasisi for its practical steps to preserve Zambia’s rural environment by training more than 10,000 small-scale farmers in sustainable farming techniques.

The Jesuit center has also gained the confidence of Canada’s Department of Foreign Affairs, Trade and Development. In 2011 the development wing of the department awarded over $700,000 to Kasisi. But to get that money, Br. Desmarais has to raise one quarter of the total on his own. While visiting Canada this summer he hopes to collect $155,000 through Canadian Jesuits International (CJI).

For more than a century, modern, Western farming techniques were held out as the key to African development — first by missionaries and later by development agencies and the foreign aid budgets of Western governments.

Br. Desmarais didn’t willingly abandon the conventional wisdom. But for years the Kasisi Agricultural Training Centre made loans to farmers so they could fertilize and mechanize their farms, then apply the herbicides that would keep down the weeds. More years than not, a slight delay in the rains or some unforeseen infestation would leave these farmers unable to pay back their loans.

Chemical farming left the land hard and dry. Tractors sat rusting for the lack of parts. Despite years of trying, yields were still way below European and North American standards and farm families seemed to be eating less and less. 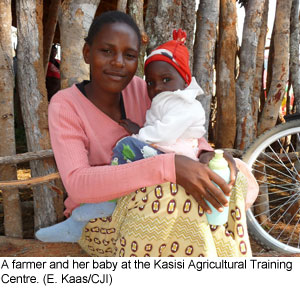 “The reason we went into organic agriculture was that I could see the conventional way of farming was not sustainable,” Br. Desmarais said.

Br. Desmarais grew up on a farm near Chatham, Ontario, not far from where one of his brothers still tills the land using all the modern technology of Canadian farms. But trying to export Canadian agricultural technology to sub-Saharan Africa is foolishness when traditional farming techniques, informed by the science behind modern organic farming, is demonstrably more productive — and profitable.

“In Zambia within one year you can double your output using resources you have on your own farm,” Br. Desmarais said. “We’re promoting it from the point of view that it makes economic sense.”

Investing in draft animals, such as oxen, simply makes more sense than any scheme to share a tractor among multiple small farmers. Oxen are more reliable, cheaper to run, provide a certain amount of fertilizer and are available for a wider variety of tasks.

When Br. Desmarais began talking about sustainable eco-agriculture and organic methods in the early 1990s, not everybody was buying it. From farmers to government agricultural extension workers, everyone thought the Jesuit was trying to drag them back into the past. Zambians craved exactly the kind of success they saw North American farmers enjoying using a full range of chemicals and technology.

After 20 years, Br. Desmarais doesn’t have to persuade farmers that organic works.

“They’ve seen it. They can produce more,” he said. “They’re more food secure. The farmers that are doing organic farming well are able to improve their houses. They’re able to send their children to school. They have money for health care.”

About two-thirds of the farmers who take courses at the Kasisi Agricultural Training Centre are women. When African women are successful in farming, their children are better fed and better educated, and their families move out of poverty.

All aspects of what the Kasisi Centre does fit into the Jesuit way of doing things. Since 1974 the Jesuits have officially tried to integrate social justice into everything they do. By 1995 the worldwide Society of Jesus had decided women’s rights had to be part of social justice. And at the Jesuits’ General Congregation in 2008, ecology became a priority of the church’s largest order of religious men.

“Social justice very much has to include justice for the environment,” said Br. Desmarais. “Within that, there has to be a concern for women’s rights. It’s all part of it.”

While justice starts locally, nothing is ever just local in the 21st century. Br. Desmarais and Zambia’s small-scale farmers find themselves sucked into the world of international trade treaties that threaten their livelihoods. 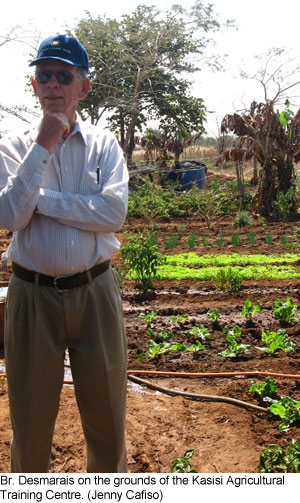 Pressure has been brought on African countries to become part of the 1991 Act of the International Union for Protection of Plant Varieties — a framework of laws to control the trade in seeds. To have access to the latest seed technology, including genetically modified seed, the African trading blocs of COMESA (Common Market for Eastern and Southern Africa) and SADC (Southern African Development Community) are being pushed into seed trade harmonization.

But seed trade harmonization will give huge benefits to patent-holding corporations such as Monsanto, Cargill and DuPont by preventing farmers from breeding and retaining their own seed. About 80 percent of all seeds in sub-Saharan Africa are produced and distributed by small-holder farmers.

“Right now a farmer can freely trade or barter his own seed. If this act comes in, a farmer may not give his seed to a neighbor or even to their brother or their mother,” said Br. Desmarais.

Genetically engineered seed has to be bought at the beginning of each planting season. Subsistence farmers simply don’t have the cash. Such a system could force many small farmers off the land.

Br. Desmarais is even more worried about losing the great variety of seeds farmers have come up with themselves.

“More research should go into promoting those kinds of seeds. A farmer who knows a bit about plant breeding, and farmers do, they can actually improve the seed they have,” he said.

Reprinted with permission from The Catholic Register, where this story originally appeared.

Ignatian formation beyond the classroom: The journey of Sonal Castelino, XMCJ, and Dan Leckman, SJ
Reflective of Ignatius of Loyola’s conviction that God can be found in all things, Ignatian formation also happens beyond the classroom.
Story
Jesuit Provincial’s Dinner 2022 – Toronto
On April 20, Jesuits and friends gathered to honour Magis award recipients, Gail and Bruce Young, and Golden Jesuit Jubilarians Fathers Pierre Bélanger, Robert Brennan, Gregory Carruthers, Keith Langstaff, and Stephen LeBlanc at the 14th Annual Jesuit Provincial's Dinner – Toronto.
Story
The Jesuit regency, a laboratory of the real
Every Jesuit, during his long formation, must go through this period of about two years during which he works in an Ignatian apostolate.
Story