Beyond the Screen: Advantages and Challenges of TV and Online Masses 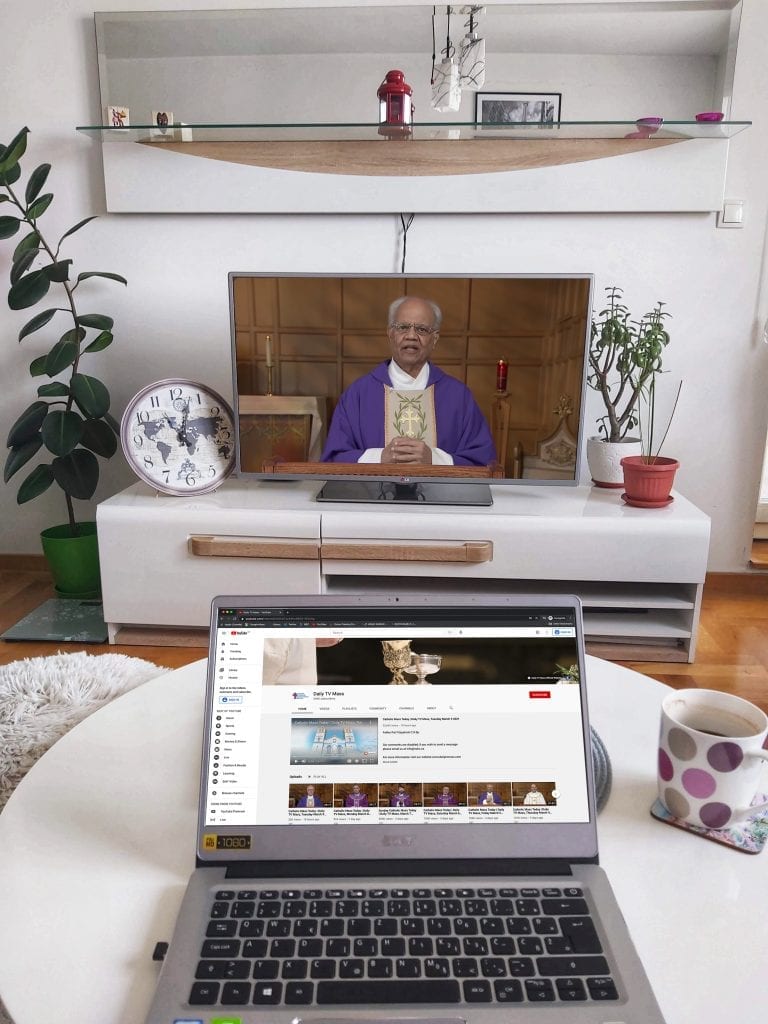 Several Jesuits have been participating for years in televised and/or online masses. These masses mainly reach older people who can no longer get around or who have no one to help them get to church.

As a consequence of the COVID-19 pandemic, Jesuit ministries and parishes have had to adapt to the new reality, putting more content on the internet or finding new ways to connect with vulnerable populations, such as the elderly. But not all of them have the resources of the Daily TV Mass, which requires a studio, a team of technicians, and precise timing standards. So what should they do?

To help those who would like to offer televised masses and to broaden reflection on the future of this type of celebration, Fr. Gilles Mongeau (who celebrates mass for Salt and Light) and Frs. Henk van Meijel and Michael Coutts (who celebrate the Daily TV Mass) share their experience.

It can be difficult to organize televised masses, not only because of the required technological tools, but also because there is no congregation, especially in the midst of a pandemic, when celebrants have to imagine people’s responses. According to Fr. Henk, “In a culture where people are valued because of their popularity, the celebrant has to remember that it’s not about him, it’s about God, about healing.” The limitations of online broadcasting, however, affect more than just the celebrants.

“In my experience, there is a big problem with most televised masses: we don’t design the televised or online mass using the technology available to us,” explains Fr. Gilles. “People become spectators rather than participants.” So how can we change this?

According to Fr. Gilles, we should design the interaction while taking into account the technological resources at our disposal. Thus, we need to ask ourselves how the camera, computer, or television works in order to imagine ways to get people to participate. Instead of using several cameras at a distance from the officiating priest, for example, we can try to create a certain intimacy with the participant.

When the celebrant prays the opening prayer, there is a close-up that gives the impression that he is really present. At communion time during the televised mass in Toronto, we see a text on the screen rather than the actual mass, and the person speaking invites people to say the prayer with him. We wouldn’t do this in person, but for television, saying or doing something is the only way to be present at communion in a participatory way. This facilitates an experience of communion and communication, of participation.

The priest can also connect with people in their homes by talking about their context, their living space. Fr. Michael offers an example.

At last year’s Easter mass, I mentioned to the viewers that this would be the first Easter mass in their lives where they were not dressed up. I noted that some of them might be dressed casually and might even still be in their pajamas because it was 8:00 a.m. Several of them wrote in the comments: “Caught in the act! How did you know? Can you see it on YouTube?” This is one way to invite their participation.

The internet provides other ways to participate. On the Daily TV Mass website, people can light a virtual candle or submit a prayer intention. Masses are broadcast on social media, and some people leave comments. 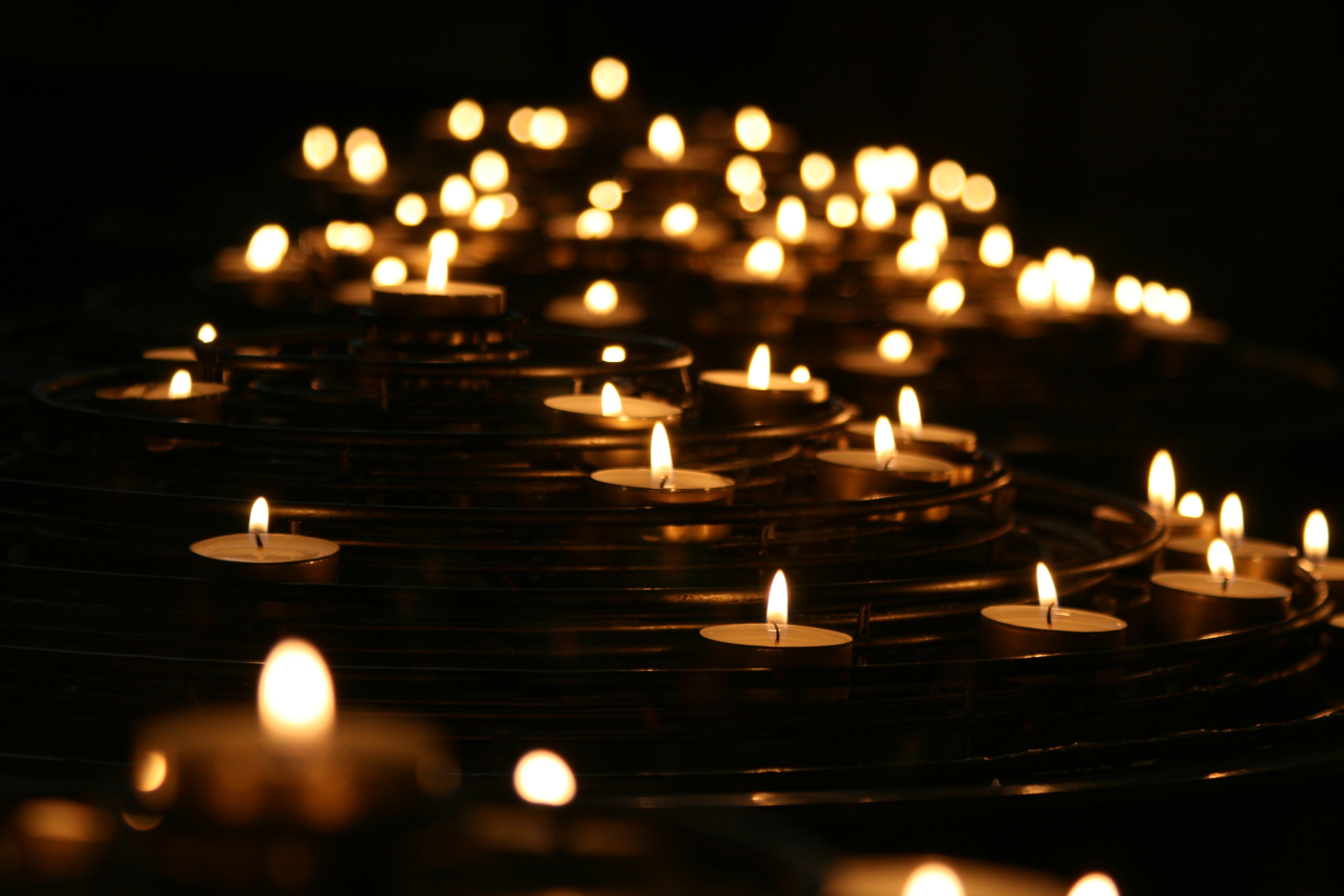 Another challenge presented by online masses is how to recreate a community of Christians. “Mass is a community of people who gather before God,” says Fr. Henk. “And usually, before or after the mass, there is sharing, conversation. This is lost when you’re in front of a screen; people are often alone in a room.”

The idea of attending only televised masses would make the whole mystery of the Incarnation meaningless. Christ chose to become flesh, to be present with us—why would we only want to meet him virtually?

“If the mass is well done, it gives an experience of community. The Salt and Light mass encourages people to call, write emails, and send short messages during the broadcast, and people respond. It reinforces the idea that this is a community: it’s very important,” says Fr. Gilles, referring to the older people who watch the televised masses. Before launching televised or online masses, therefore, we need to think about the ritual itself and the interactions; but by simply making it possible for the community to continue to see and hear the same priests allows us not only to maintain contact during a pandemic but even to broaden it.

While some people from as far away as Australia were already watching televised masses before the pandemic, the situation precipitated by COVID-19 and the restrictions on gatherings has meant that the numbers have more than doubled and include younger people. Some have even contacted Fr. Henk for spiritual accompaniment after seeing him on TV or YouTube. 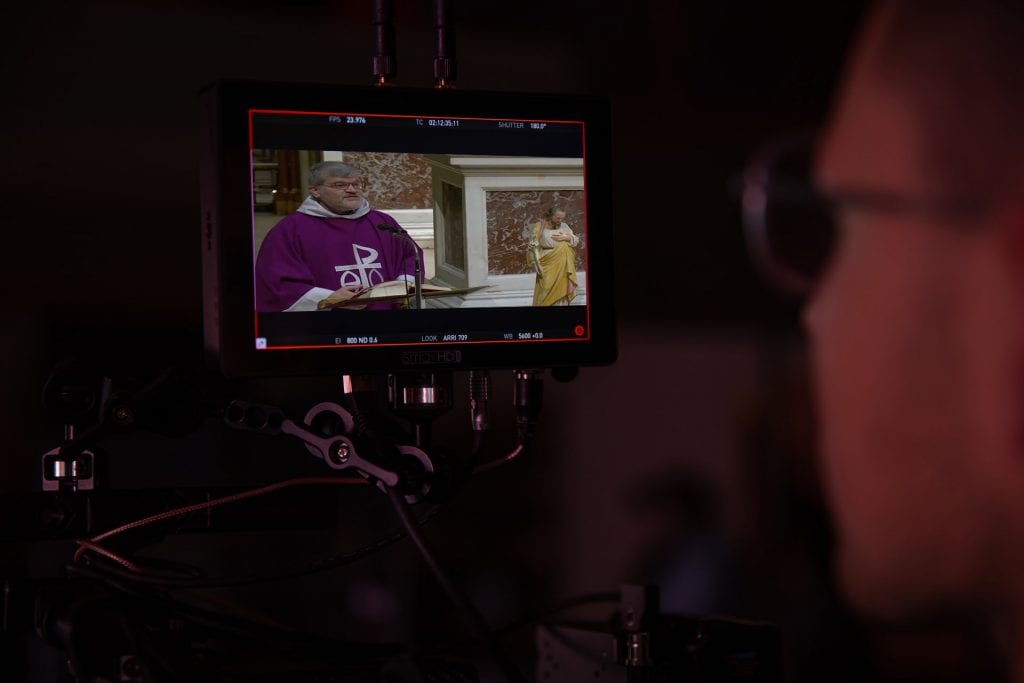 “We have viewers in the Middle East where, in many non-Christian countries, opportunities to attend mass with a community of faith are rare, if they exist at all,” explains Fr. Michael. “Another large audience is in Africa, but our largest by far is in the United States.”

Masses also reach people who were not used to participating in church celebrations, notes Fr. Gilles.

I am amazed at how many people who did not know the Church or who had left the Church for one reason or another are rediscovering or discovering for the first time a spirit of welcome in the Church because of the style or type of celebration, or because of the message being preached during certain televised masses.

I think that this can be a key element of outreach if we take it seriously. Online or televised masses can be crucial in presenting a face of the Church that is welcoming and open, where we are not afraid to preach about the important things in people’s lives. Even after the pandemic, I think that these broadcasts will still have a role to play in making people feel welcome in the Church.

And after the pandemic?

The pandemic has brought thousands of people to their screens to watch the masses. What will be left of this new practice when the restrictions are lifted and churches can once again be open to the community of believers? Will people come back to church? Fr. Gilles believes that we must ask ourselves what their relationship to the Church was before the pandemic.

For some people, the pandemic has highlighted the fact that belonging to the Church was a matter of habit rather than need. It’s possible that many people in this group will not return.

Others may have discovered that yes, they went to mass out of habit, but that through this habit they discovered something important: community, listening to the Word. I think that these people will come back and maybe be a little more discerning. So, instead of simply going to the nearest parish, they will look for a community of belonging that really suits them.

The third group of people are those who, since the beginning of the pandemic, have been aware that they are missing something if they don’t participate in an in-person mass. And this group will certainly come back.

Fr. Henk adds: “I hope that people will return to church after the pandemic, but the TV masses are here to stay.”