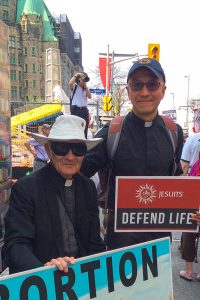 May 25, 2016 — For more than 25 years a lone figure has been quietly present on Canada’s Parliament Hill, in Ottawa. His raison d’être is not nuclear proliferation, tax reform, or climate change, but something he feels is much more pressing — the protection of unborn children and the protection of human life from conception to natural death.

“Worldwide abortion is the single greatest evil in all of human history, apart from the death of Christ, so you can’t be involved with more important work,” says witness to life Jesuit Father Anthony (Tony) Van Hee.

Fr. Van Hee has been fasting on the Hill through rain, sunshine, and bitterly cold Ottawa winters, during sessions of Parliament, since the ill-fated Conservative abortion Bill C-43 was first introduced to the House of Commons in 1989. He fasted and prayed when the Bill was introduced and when it was rejected the following year.

The Bill, which would have retained abortion as a criminal offence, would have permitted abortion on broad grounds. Legislation passed in the spring of 1990 but was defeated in the Senate by an unprecedented tied vote in January, 1991. Today there is no abortion law in Canada which means tax-payer funded abortion is permitted throughout all nine months of pregnancy, for any reason, up to the moment of birth.

As a result, nearly 1 in 4 pregnancies today end in abortion and 100,000 abortions are committed annually in Canada. Since legalization in Canada in 1969, more than four million abortions have been performed.

With such staggering statistics, the soon to be 81-year-old, is still not deterred or in retirement.

“My presence, fasting, prayer and witness on Parliament Hill provides the whole pro-life movement in Canada with an identifiable focus at the location where legislation must take place,” says Fr. Van Hee. 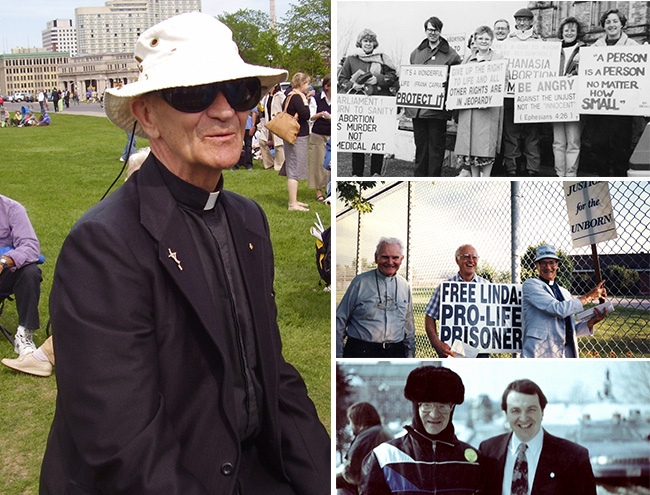 Even though his approach is non-threatening and unobtrusive, the unassuming priest has been harassed, his signs defaced, trashed, and stolen, and he’s even been arrested.

Interestingly, during his second arrest, the decision by Senior Justice Belanger included the following statement, “If freedom of speech is not patently and conspicuously seen to be cherished and protected on Parliament Hill, how can it meaningfully be seen to be protected and cherished anywhere else in Canada.”

Views on abortion are shifting since Fr. Van Hee was ordained in the late 1960s. A significant portion of the population says it does not support abortion or wants to have some type of restrictions. With the advancement of ultrasound technology and more young people becoming informed about life issues, many more are taking up the pro-life cause.

Fr. Van Hee mentions some young Canadian activists like Stephanie Gray and Alissa Golob, and American activists Lila Rose and David Daleiden, who have taken up the cause. He also points to the thousands of young people that gather in Ottawa for the annual March for Life.

This year’s March on May 12 had more than 22,000 attendees, from as far away as Newfoundland. Also this year, at the annual Rose Dinner, organizers recognized Fr. Van Hee for his outstanding and consistent pro-life work which he calls, “the best years of my life.”

In 2014, the annual March was even dedicated to Fr. Van Hee and his 25 years of devotion to the pro-life cause. While grateful for the recognition, he is somewhat overwhelmed and refers to the Gospel of Luke 17:10, “We are unworthy servants; we have only done what was our duty.’”

Fr. Van Hee believes abortion will come to an end and his message to people is simple: “prayer and fasting can change the world.”