Father Chris Rupert died early on the morning of October 16, 2019, in the Supportive Care Unit at Lakeridge Hospital in Oshawa, Ontario. He was in his 83rd year and was a Jesuit for 60 years. He had suffered a stroke four months ago, and although he took on rehabilitation with determination, the last weeks of his life indicated a much more serious health situation. Chris, the son of Thomas Rupert and Regina Harrison was born in Belleville, Ontario 31 March, 1937. After two years at St. Michael’s College School in Toronto and three years at the University of St. Michael’s College, Chris entered the Society at Guelph on 14 August, 1959 and pronounced first vows on 15 August, 1961. Instead of doing the regular juniorate, he felt attracted to missionary life and was missioned to India in 1961 to study Hindi. Then in 1962 he studied at the philosophate in Poona. A year later he was assigned to the Calcutta Vice-Province, mainly as a teacher at St. Joseph’s College in Darjeeling. Chris discerned that missionary life was not the path he should take, and he returned to Canada in 1967 to do a year of regency at Brebeuf College School, Willowdale, Ontario. Following this he moved to Ottawa for a three-year course in Economics at the University of Ottawa. In 1971 Chris began theology at Regis College, Willowdale, and was ordained there on 7 June, 1975.

Chris exhibited a taste for theology and sacred scripture and for two years (1976 – 78) he studied theology on his own in Toronto. Then he moved to Pickering to serve at Manresa Retreat House and continue studying for his thesis defence. In 1985 he journeyed to Boston to continue his thesis preparation at Weston and Harvard, returning to Manresa a year later with a doctorate granted at TST (University of St. Michael’s College at the University of Toronto). The title of his thesis, which will soon be published, is Relationship Criticism: A Study of the Possibilities and Limitations of the Application of Robert F. Bales’ Symlog and Interaction Process Analyses to Scriptural Criticism. In 1988 he spent a year as a professor of theology and scripture at Wheeling Jesuit College in West Virginia. The next assignment was to St. Andrew’s Parish in Thunder Bay in 1989 and for the next six years Chris taught scripture and theology at Lakehead University and throughout the diocese. He was missioned to La Storta Jesuit Community in Pickering in 1996 and there did pastoral work throughout the region until his death, save for two years at Ignatius College (2000 – 02) where he was Assistant Pastor in the Jesuit parish.

During his last assignment in Pickering, Chris became the groundskeeper of the vast property. A steady and hard worker, he transformed the grounds by plantings of trees, shrubs, and flowers, eliminating old trees, eradicating invasive weeds and clearing up debris. He was very well informed in gardening and forestry, but his explanations and definitions were rather complex and couched in his unique style of understanding. In later years he hired young workers and taught them with his vast knowledge of horticulture, often as part of a government-sponsored programme. Not content with beautifying the La Storta land, he regularly serviced the grounds of Jesuit properties in Toronto. Chris was working the very day of his stroke. Even though in precarious health in his last few years he never really slowed down.

Chris was a zealous priest who served for years in parishes of the Durham Region and acted as chaplain to various Knights of Columbus Councils. For entertainment he subscribed to theatre outlets in Toronto and nearly always invited a Jesuit to join him. He always tried to choose a guest who would delight in the type of play for which he had tickets. If he stayed awake, he too would enjoy the play.

He was such a constant fixture on the La Storta property – behind a snowblower his eyebrows and beard covered with snow, or wearing his tattered orange sweatshirt and floppy hat on a tractor cutting lawns, or on his knees planting and transplanting, or legally spraying the weeds he hated with such a passion, that it is hard to imagine Chris no longer on the grounds, no longer rushing off to ministry, no longer giving an encyclopedic response to a simple question or comment.

Would you please offer one Mass for the repose of his soul. Members of the La Storta and René Goupil Community are asked to offer two Masses. 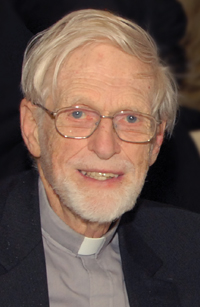