Saving Our Common Home: Relations Highlights the Wisdom of the Amazon and Its Peoples 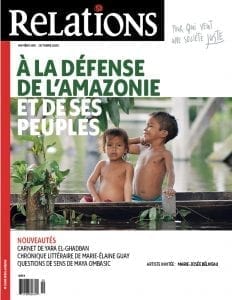 “The Indigenous peoples of the Amazon can help us to move forward on the path of spiritual growth,” says Jean-Claude Ravet, former editor-in-chief of Relations and now an interim member of the editorial team, commenting on the latest issue of the journal.

The idea for this issue, entitled “In Defense of the Amazon and Its Peoples,” emerged prior to the Synod on the Amazon. The aim is to portray the reality of the Amazon in all its dimensions—ecological, economic, political, cultural, and social—with a focus on the Indigenous peoples who live in that region.

“This issue not only offers an understanding of the reality, it also provides elements for reflection and action. We believe that our fundamental task is really to be in solidarity with the Indigenous peoples in protecting the Amazon.”

These reflections are rooted in the Universal Apostolic Preferences and serve to illustrate their interconnectedness.

“We are faced with the formidable challenge to change our attitudes and behaviour. It is often the poorest among us who are the first to suffer the consequences of damage to and abuse of nature. This issue focuses on the importance of both caring for nature and walking in the footsteps of Christ, in his poverty, and of those who are marginalized.”

In this interview, Jean-Claude Ravet speaks about the current issue of Relations and the relevance of the topics discussed therein, which also concern Canada. To obtain the journal and gain access to all the articles (in French), click here.

Can you describe briefly how the Amazon is a place where we can work with others to safeguard our common home?

This issue goes right to the heart of the ecological question. It’s becoming commonplace to refer to the Amazon as the lungs of the planet and to recognize that it is being increasingly threatened by the relentless exploitation of resources purely for profit. For this reason, a real conversion of our way of life is needed so that the economy can be more in tune with nature and no longer contribute to its destruction. In order to become more respectful of and in harmony with nature, we must abandon the dominant extractivist paradigm. This issue of Relations makes clear that an important part of the solution is the support of Indigenous peoples, who must be recognized as the stewards of the forest.

Several articles focus on various qualities of these peoples who have much to teach us. When we talk about conversion, we are talking about re-examining how we relate to the world. Indigenous peoples are masters in this way of thinking.

We learn about their relationship to the land, their way of life, and their attitude towards their environment. They teach us to consider nature as a part of ourselves. If we do this, we will no longer act in a purely utilitarian way towards nature, as though it exists solely to be of service to us. The relationship is reciprocal; we are called as well to be of service to nature.

This attitude reveals that Indigenous peoples do not believe that they own the forest. In their view, it’s as though nature lends its resources so that human beings can live there, using these resources in ways that contribute to the regeneration of nature.

This issue of Relations is therefore fundamental to understanding how each one of us is called to see the place we inhabit as a dimension of the self. It gives us a lot to think about.

How are Jesuits involved in the Amazon?

Latin American Jesuits are very, very involved in defending the Amazon and the people who live there. For example, the issue contains an article entitled “Almost Half a Century on the Path to Well-Being,” by Arizete Miranda, Raimunda Paixào, Joaninha Honôrio, and Jesuit Fernando López, all members of the Itinerant Team initiated by the Jesuits of South America. It describes one aspect, among others, of Jesuit, Christian, and ecclesial solidarity with the Amazon: the creation of the Indigenous Missionary Council, which brings together lay people and Catholic missionaries in Church-sponsored initiatives of solidarity and acculturation among the Indigenous peoples. The article illustrates the specific involvement of the Society of Jesus in these areas.

How can the reflections in this issue be applied to North America and to the Jesuit Province of Canada?

The articles make us aware of the marginalization of Indigenous peoples in the Amazon region, which also affects us in North America. Rather than learning from Indigenous peoples, we have excluded them and rendered them invisible. This paradigm shift in our concrete relationship with Indigenous peoples concerns us in Canada as well. It constitutes another fundamental challenge for the Jesuits of the Province.

In addition, we should not forget that there is a powerful resistance on the part of Indigenous peoples in the Amazon: they are not simply victims but agents of resistance. This calls us to solidarity.

One article shows the different aspects of their struggle to protect the Amazon, to protect their way of life, and to resist the various acts of aggression of multinationals, deforestation, etc. These resistance movements are also strongly supported by the Church and by Christians in general. We learn about the real work of struggle and solidarity that is being done and that gives hope. We are indeed living in critical and dramatic times that require radical and decisive action, but at least we are not starting from square one.

And in Canada, too, we must support Indigenous peoples in their desire to be the protagonists in their own development. It makes us question once again the implications of extractivism. Our governments often try to promote their economic policies, the exploitation of resources, without taking into account the rights and claims of Indigenous peoples.

Humanity is at a fundamental turning point. We must question this destructive, self-destructive economy of humanity. We will not change without taking actions that disturb us. We must question our way of life, which is based on the absurd and disastrous belief that resources are at our disposal and that growth must continue infinitely on this finite Earth.

We need to change our way of thinking and the spirituality that goes with it, because we often have a spirituality that indirectly supports our actions. In this regard, we have much to learn from Indigenous spirituality that leads us to rediscover in some way the insights and life-giving power of the Gospel, namely, to walk humbly with God in a spirit of justice.

The Indigenous peoples of the Amazon can help us to move forward on this journey of spiritual growth. Moreover, there is an interview in this issue with anthropologist Robert Crépeau, who reflects on Indigenous cosmogony and its impact on their way of life and what it has to teach us.

A reflection by Rosella Kinoshameg on the remains of 215 children at Kamloops
Rosella Kinoshameg, DOS, is an Anishinaabe woman and a Wiikwemkoong community member. She presented this reflection on June 3rd, when a memorial service was held inside the "Ruins".
Story
Laypeople and Jesuits: Together in the Mission of the Lord
Several colleagues have agreed to share how they envision and live their collaboration with the Jesuits of Canada.
Story
Finding the Centre: A New Common Home in Quebec
The Centre de spiritualité Manrèse is internationally recognized as a laboratory that continually reimagines the group experience of the Spiritual Exercises in daily life. A fundraising campaign will allow the Centre de spiritualité Manrèse to pursue its mission and reach a wider audience.
Story