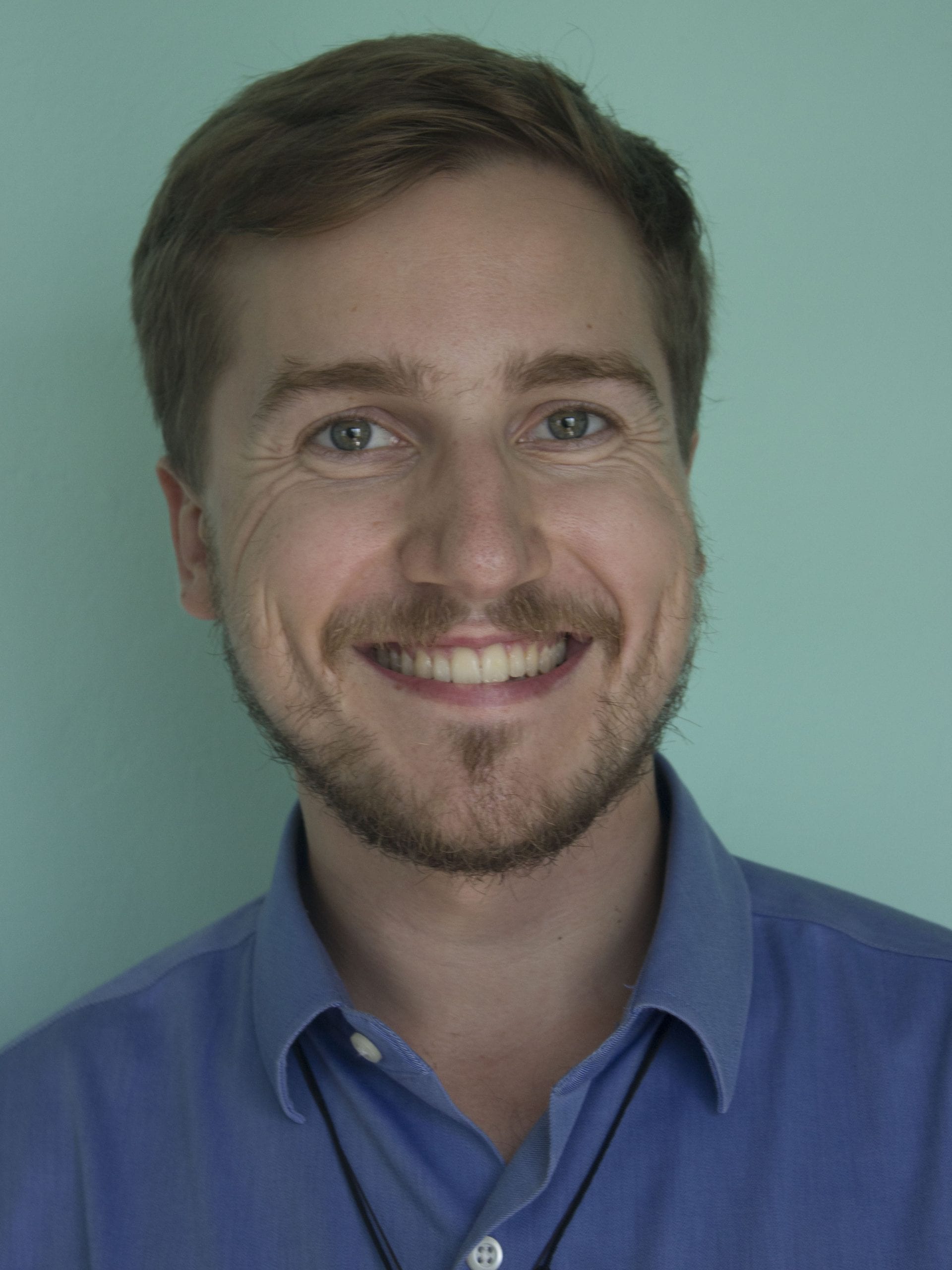 Filled with laughter, our interview with Marc-André Veselovsky took place in a joyful atmosphere, reflecting the character of this young man. Twenty-six years old, Marc-André is not only a Jesuit but also a vegetarian, a semi-professional singer, a lover of board games (some might say the more complicated ones…), and a good listener.

So, what pushed this young man to begin his formation to become a Jesuit? What were the highlights of his formation? Now a regent (or intern) at the Jesuit Refugee Service (JRS) in Canada, Marc-André responds to these questions.

What attracted you to the Society of Jesus?

I grew up in a fairly religious Catholic family. When I turned 18, I realized that the only reason I was Catholic was because my parents were, which wasn’t really a good enough reason to remain one. But that same year, just before I went off to the University of Ottawa, I met a group of young Catholics, Catholic Christian Outreach, whose lives and friendships among themselves and with others showed that the source of their joy was their relationship with God. God comes to us to demonstrate his love… but he wants us to respond! (laughs) This group encouraged young people to welcome God’s love into their lives. I decided to give it a try, and so I began to pray with a simple prayer: “Jesus, be the centre of my life.”

I went off to university to study philosophy as a way to explore the questions I had, which seemed to be more important than the questions posed by the sciences, even though I was good at those subjects. For me, God’s love was behind it all. That was my summer of conversion.

This experience fostered in me a life of prayer and a closer relationship with God, which became the source of joy and meaning in my life. All of a sudden, I was open to the idea of priesthood. Before that, my greatest desire was to get married and have kids. But after this year of conversion, and through God’s love—which is more perfect than any other—I became more open. Of course, that doesn’t mean that getting married or having kids is a bad thing (laughs), and it doesn’t mean that I don’t still have this desire—even today. It was a real time of discernment: Should I choose marriage or the priesthood? 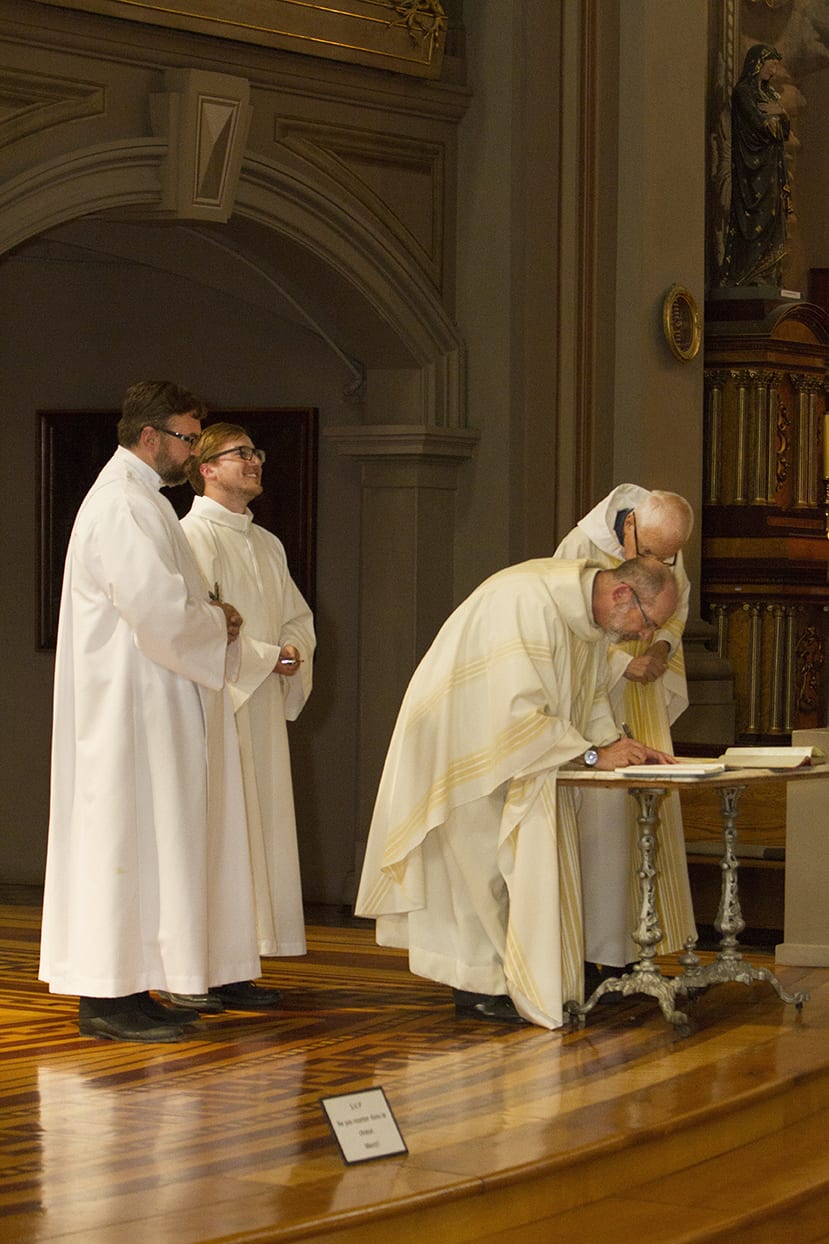 About halfway through my studies, I started to lean more towards the priesthood after having a “deathbed reflection.” If you aren’t sure about something in life, imagine being asked a question on your deathbed: Did I regret my decision or not? I wondered whether I should enter the seminary and realized that I would never know unless I tried it. So, I decided to enter the seminary, and thought, why not with the Jesuits?

I already knew a few Jesuits from northern Ontario, at the Anishinabe Spiritual Centre. They taught me about the Ignatian way of praying by using the imagination to enter into a passage of the Gospel.

Three weeks later, I saw that there was a “Come and See” event at the noviciate in Montreal. There, someone asked the novice master what differentiated the Jesuits from the other religious orders. He replied, “Look, we take the three vows, but we live them in a different way. As Jesuits, we [according to him] put the emphasis on obedience. We are supposed to be available to work anywhere and at any time for the greater glory of God.”

That awakened something in me.

Then, everything I did confirmed the call to this order, along with the formation that the Jesuits offered, with its focus on advanced studies and experiences. As well as requiring philosophy and theology studies, Jesuit formation also includes two years of noviciate with experiences such as the 30-day silent retreat (which is truly an encounter with Jesus), six weeks in a L’Arche community, one month of pilgrimage, five months of working with the Jesuits… and that’s just in the first two years! And over the two summers during our studies in philosophy, we engage in internships. Finally, we are called to do a degree in theology.

How exactly has your formation been useful in your apostolates?

One example is my apostolate in Paris with JRS (Jesuit Refugee Service) France, which was to accompany asylum seekers, the majority of whom were Muslim. Ever since the 1980s, the accompaniment of refugees has been a big priority throughout the world. I tried to find them housing, with very little success. Even though I felt that I wasn’t helping them, they were still very grateful for the time I spent with them. When you’re poor, you need money and assistance, but government aid is usually offered through a very impersonal system that treats people, especially poor people, as numbers. Being part of a Jesuit community allowed me to spend time with people. Jesuit formation helps us to discover more about who we are and thus enables us to be more genuine and natural in our relationships with others, which, in turn, can help others on their journey of self-discovery. 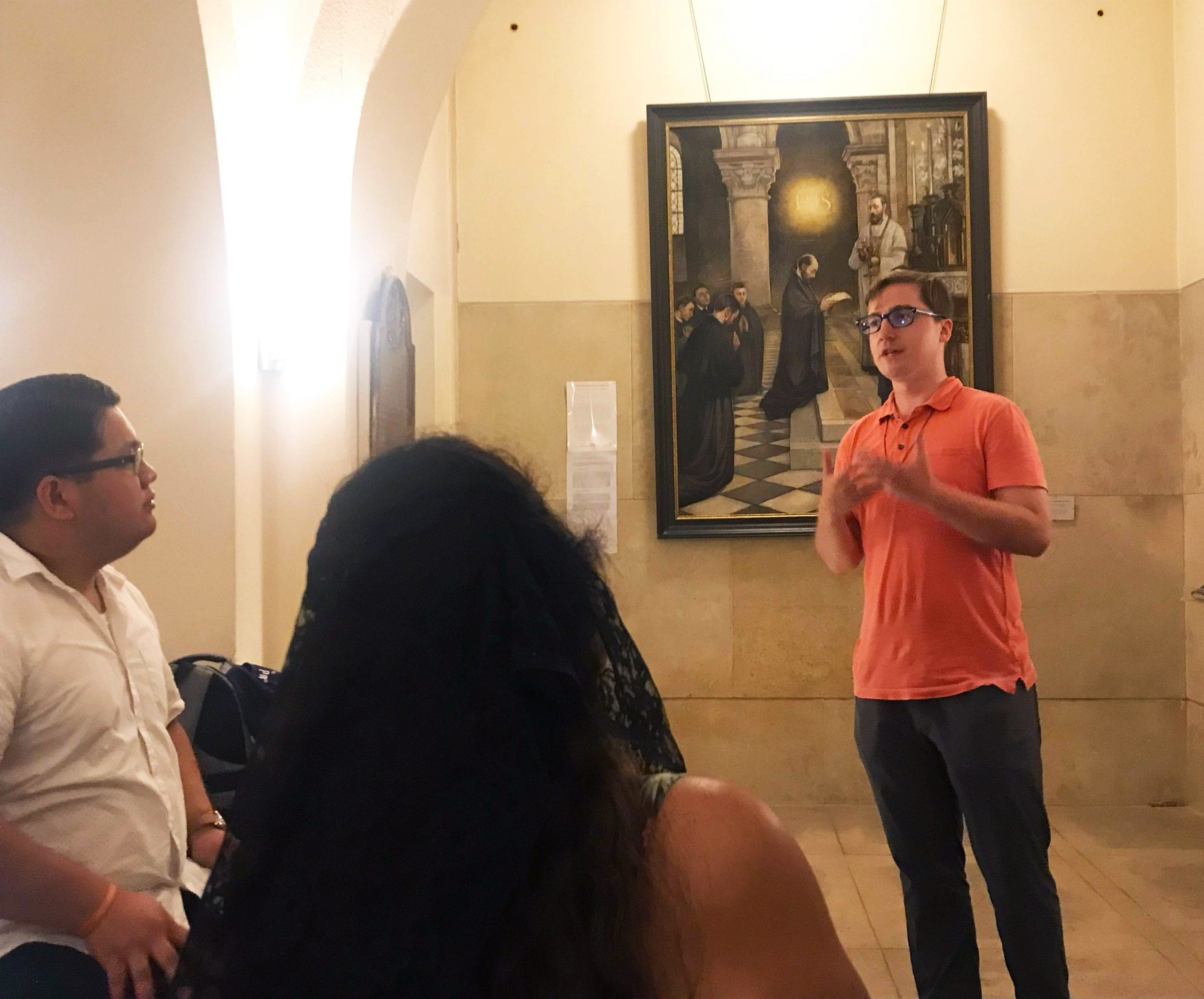 What moved you the most in your formation? What was the most difficult thing?

From the Spiritual Exercises, I hold onto at least one sentence: I love you. By the grace of God, I have the capacity to love others. Even though hatred exists, love for others does, too. I love you, but I love God even more because it is through God that we are able to love each other.

One thing that’s been difficult is the separation from my family and friends. When we see each other, it’s not the same as before. It’s good, but at the same time it’s difficult. We have to see how our relationships evolve and be open to new friendships and our relationship with God. A good community helps with that.

You shared previously that the pilgrimage you made during your noviciate really moved you. Can you tell us more?

During the noviciate, you have to make a five-week pilgrimage to somewhere in North America with only $70 and a bus ticket. When I visited the Jesuit noviciate for the first time, I told myself that if the Jesuits there had said yes even to that, then they really wanted to be Jesuits!

For my pilgrimage, I discerned that my destination would be Our Lady of Guadalupe in Mexico. We were allowed to choose whether or not to stay in Jesuit communities along the way. My first stop was New York, where I needed to stay with the Jesuits in order to be able to cross the border. In the city, I met Peter, an alumnus of a Jesuit university. He told me frankly that I should live with the poor! He also shared with me his favourite passage from the Gospel. It’s when Peter begins to drown as he tries to reach Jesus who is walking on the water. He told me that Peter had wanted to do something extreme and, and even though he had failed, he had been brave enough to try. 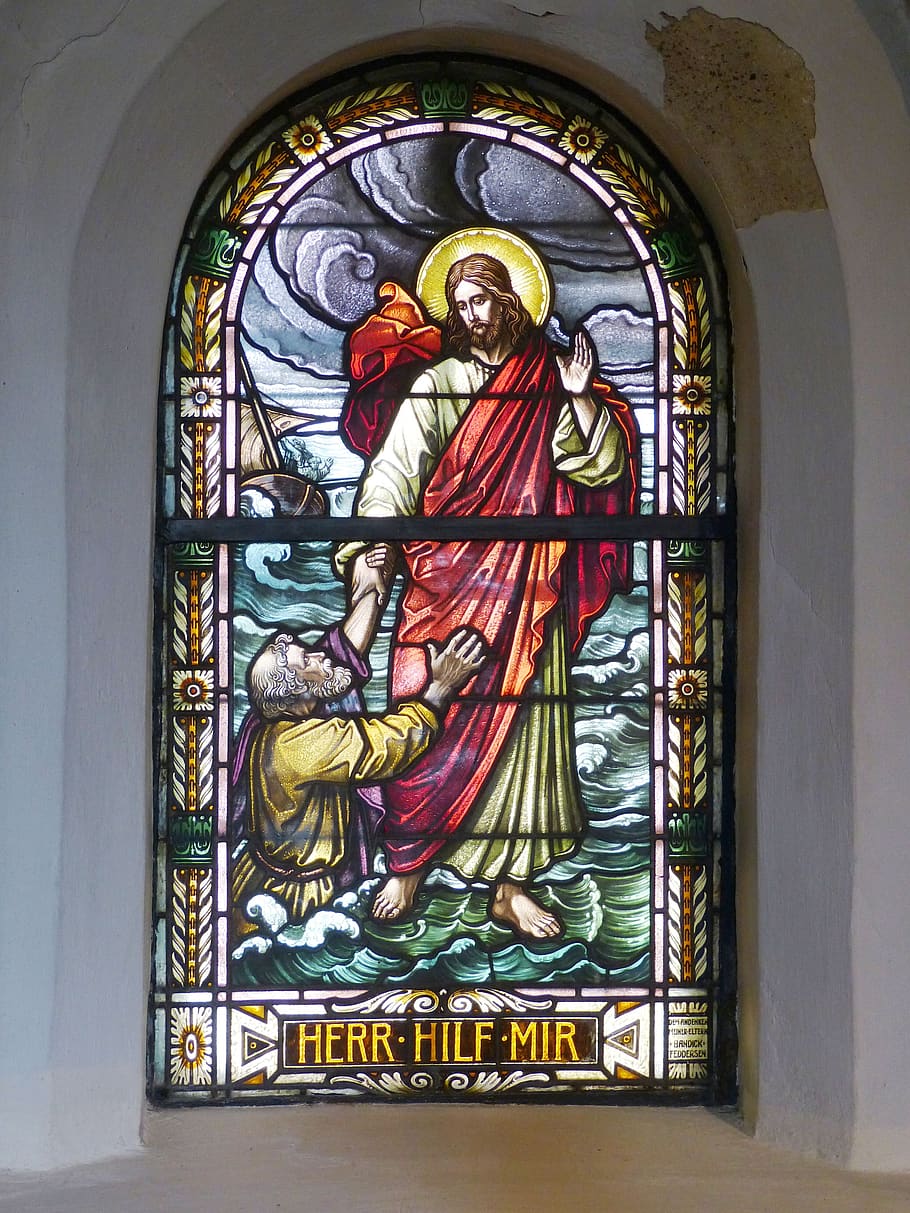 The next day, I made my way to Atlanta. Arriving exhausted, I decided to go and sleep in the Jesuit community for one night. I attended mass in their parish, where I saw a stained-glass window with the image of Peter drowning. So I knew I shouldn’t stay there! (laughs). After Mass, I didn’t speak to the priest, and no one answered when I rang the bell at the rectory. I instead slept in a shelter for the homeless.

I was in a room with 600 beds, and there were people doing drugs and playing music. Everyone was either Latin American or black, so I stood out. But I was confident, even if I was afraid. Ken, my neighbour, started talking to me about his life. I was shocked by his story, and then I shared mine with him. I told him that I came from a good family and that I was just on a pilgrimage without much money. We connected. He told me that I seemed like a good man and gave me $50. My first thought was that I couldn’t accept it, and my second was that I just had $2 in my pocket. (laughs) “You have to take it,” he said. “Do you know how much I spend on drugs? It’s the best thing I can do with this money right now.” At that moment, he was my angel.

We bonded some more over waffles the next morning. He gave me advice on where to go and which streets to avoid. The next night, I slept on a couch in the home of a woman parishioner from the local Catholic parish; then I stayed with the Franciscans in Alabama. After that, in Houston, Texas, I stayed in a community run by an apostolate that focused mostly on people who had just been released from prison. I made friends with good people who had had the misfortune of going to prison. These encounters were great because they broke down the barriers between rich and poor. Later, I knocked on the door of a Catholic parish. The secretary didn’t let me speak with the priest, so I went to the local mosque and a young man opened the door. When I explained that I was a Catholic seminarian on pilgrimage and had very little money, he invited me into their Muslim community. I learned a lot of interesting things from these young adults.

I finally arrived in Mexico, but it was the relationships that mattered more than the destination. All Jesuits have a similar genuine experience of God’s providence through others.

As a young Jesuit, what are your hopes for the Society and for Canada?

After General Congregation 32, we said that our mission was “the service of faith and the promotion of justice.” I hope that we won’t neglect either of these. Canada is becoming secularized, and young people are asking a lot of questions about the meaning of life. I hope that we can offer them (without imposing) the option of faith in Jesus that is adapted to today’s culture to show them that life has meaning, that love exists, and that we can experience this love. 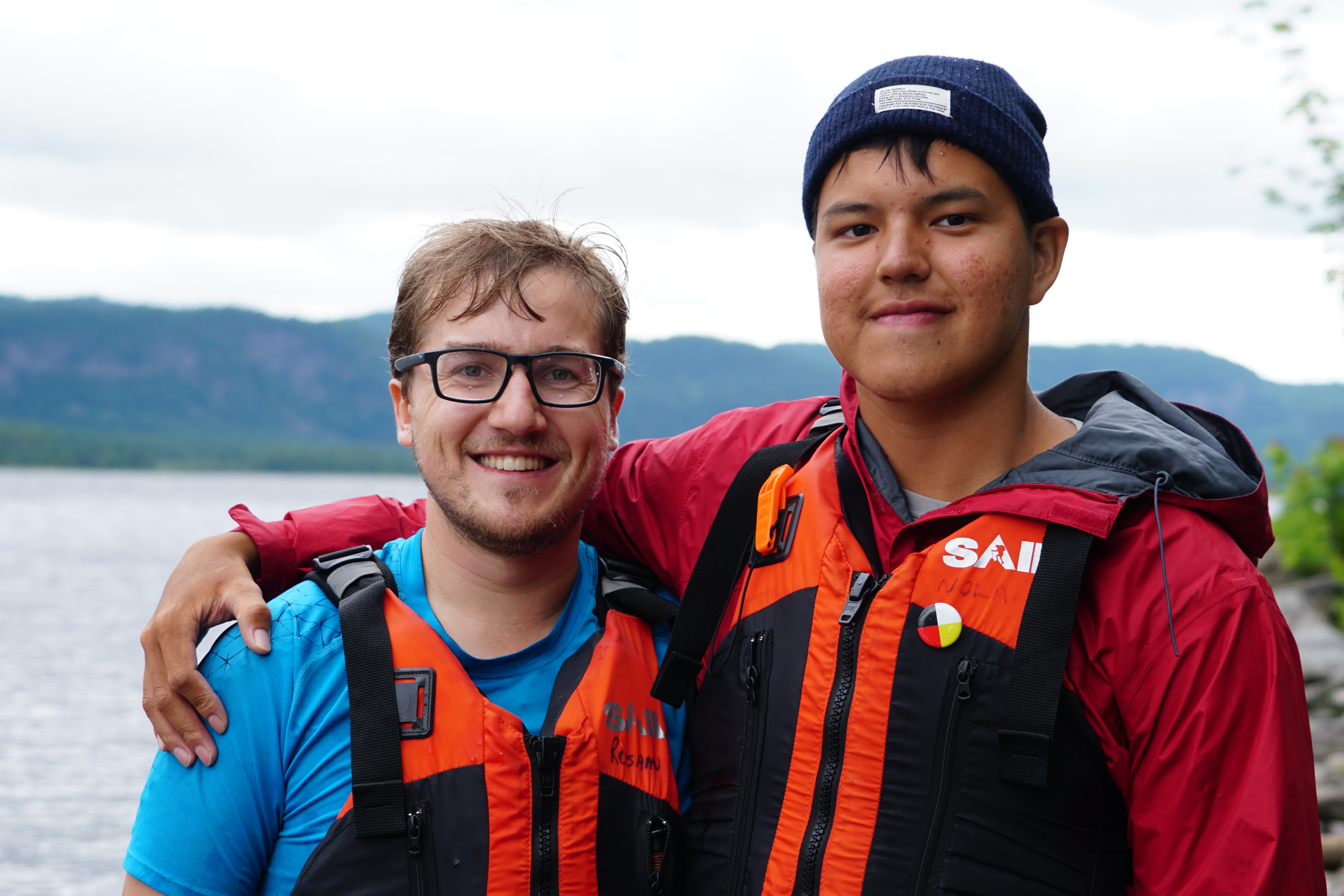 I also hope that we can do something significant to help Indigenous communities, even if it’s just to stand by them to support them in their demands. They have experienced the worst of what it means to be a part of Canadian society, and it’s partially the Church’s fault. Maybe faith can help them, maybe not, but we can at least stand by their side and offer support.