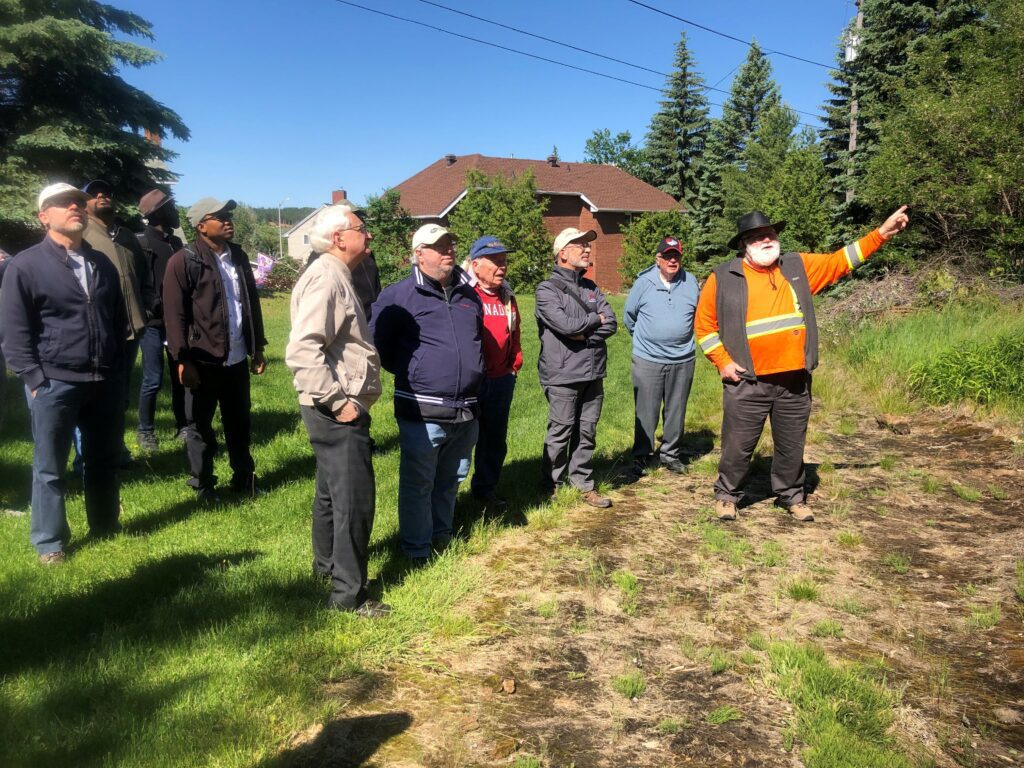 After being postponed more than once because of the pandemic, the ecological retreat of the Jesuits of Canada finally took place in Sudbury, Ontario this past June, thanks to the efforts of the organizing team that included John McCarthy, SJ (then Province facilitator for ecology), Priscilla Solomon, CSJ, Bernard Hudon, SJ, and Trevor Scott, SJ, Peter Bisson, SJ and Yvonne Prowse.

The retreat was structured around the dynamics of the Spiritual Exercises and the Paschal Mystery. Two scientists (Peter Beckett and Graeme Spiers) who have been part of the reforestation program that began several decades ago in Sudbury led a day on the land, and towards the end of the retreat, they took participants through the history of the ecological restoration. “That was really the culmination of the retreat,” says Fr. McCarthy.

José Sánchez, director of the Communications Office and a retreatant, was touched by the eight days he spent in Sudbury: “Through the example of the degradation and regreening of Sudbury, participants in this retreat were able not only to learn and appropriate the experience of desolation caused by environmental degradation, but also to have hope in the power of reconciling with creation and working towards change.”

Sister Solomon believes that this ecological retreat should not be a one-time experience, but rather repeated in conjunction with Indigenous people and with the integration of Indigenous teachings. “One of the fruits of this retreat must be to truly respond to Creation in a way that recognizes the retreatants’ oneness with Creation and their respect for the land and the people. I also hope that one of the most important fruits would be that each of us would engage as fully and completely as possible in the process of reconciliation between Indigenous peoples and colonizing peoples, which includes Jesuits.”

Father McCarthy and Sister Solomon explain the reasons for organizing this ecological retreat and the similarities between the Catholic faith and Indigenous spiritualities in caring for our Common Home.

Looking Back on the Retreat in Sudbury

The theme of the retreat was proposed by the provincial, Erik Oland, and the retreat took place at Villa Loyola in Sudbury, especially on the land. Bernard Hudon, SJ, described the lakes, Father McCarthy spoke about the forest, using the Holy Trinity as a starting point, and Elder Arthur Petahtegoose gave a talk on the relationship between the land and the people.

Father McCarthy noted the importance of taking action: “I find that the ecological issue is often considered solely in terms of moral issues, and that’s very important, but at the same time, I wanted to engage the theological or spiritual foundations that ground the actions: what does ecological conversion mean?”

Why hold the retreat in Sudbury? As Sister Solomon explains: “Sudbury in the 1960s was devastated by the impact of mining and production of vast quantities of sulphur dioxide and heavy metals. Essentially all plant and animal life was killed closed to the centres of ore production and processing. Even the lakes were killed. After that, a regreening process was begun by people [governments, citizens, industries] who were very concerned about this situation. The retreat was to be experiential in part to allow retreatants to see images of how the landscape had looked before and to enable them to walk among the trees and on the land today. It was a very powerful metaphor for the Pascal Mystery: the death and resurrection of the earth over a 60-year period.”

For Mr. Sánchez, this retreat “was an unusual opportunity for participants to experience real personal transformation in relation to the climate emergency and the suffering of Creation, something that is not easy to attain. For many of us in Canada, the reality of the climate emergency can feel distant. For example, most of us are rarely affected by the extreme events experienced by victims of cyclones, droughts, and so on in many other parts of the world. We are privileged. Therefore, it may often be difficult for our hearts to feel deeply moved and inclined to love and work for transformation in this regard.”

The image that came to Ron Perron, SJ, during the retreat was that of the frog and the hot water, a parable of the planet’s ecological problems. Humanity is taking its time to wake up to the reality of the climate emergency. “And we Jesuits,” he asks, “are we willing to reduce our travel to improve life on the planet?”

According to the organizers, and the feedback they received, the retreat was a success. “I think the retreat went very well, with real interest and good participation in all the events we had—gatherings, times of prayer, outdoor activities. There was a bit of discussion after some of the sessions or events, but the group moved very quickly into a time of quiet and personal reflection: I was very grateful for that,” says Sister Solomon.

Ecology in the light of Indigenous wisdom and the Church

According to the province facilitator for ecology, it was important to highlight the voices of Indigenous people among whom they have been working or sharing apostolic life for decades. “For me, the integration of Indigenous spirituality, that is, seeing the intimate connection between our human lives and all of Creation as a circle, is really Trinitarian spirituality as well. It is the same reality but expressed through different words and experiences.”

Sister Solomon agrees: There are currents of consciousness and concern in the Church and among Indigenous peoples that intersect and flow together in the same direction. For example, Indigenous peoples believe in a Creator who created all things good. “All creation is good and has value in itself. And it has value for what it offers to the rest of creation, but it also has its own dignity. This is a belief that the Catholic Church is trying to reclaim and become more conscious of. Pope Francis has actually worked to try to bring that to the forefront and make us more aware as Catholics of the responsibility we have to care for the earth and to care for the poor of the earth.”

Another point of intersection is language. “I think that we, as the Catholic Church, are becoming more aware of the language we use when we speak of the earth and the relationship to the earth. We are becoming aware of how, in the past, we have used the language of domination, and we are recognizing that we are one with all of Creation, which we need to use but not abuse. Indigenous people who practice traditional teachings place great emphasis on recognizing that we are part of, and dependent on, Creation.”

So while the focus of the retreat was on ecology rather than on Indigenous wisdom and spirituality, participants were able to gain some insight into these areas. “An Indigenous elder came to speak to the group and the participants were very attentive and seemed to really understand what he wanted to share,” says Sister Solomon, who led prayers and a pipe ceremony, as well as offered some teachings. “It seems that Jesuits are becoming more aware that it’s really important to be able to understand and relate to Indigenous people in a different way.”