The studies that members of the Society of Jesus engage in have an apostolic purpose: They aim to prepare these men to better serve the mission that God entrusts to the Society and to each Jesuit. This September, the Jesuits of Canada are offering a brand-new program in Quebec City for young Jesuits doing their first studies! 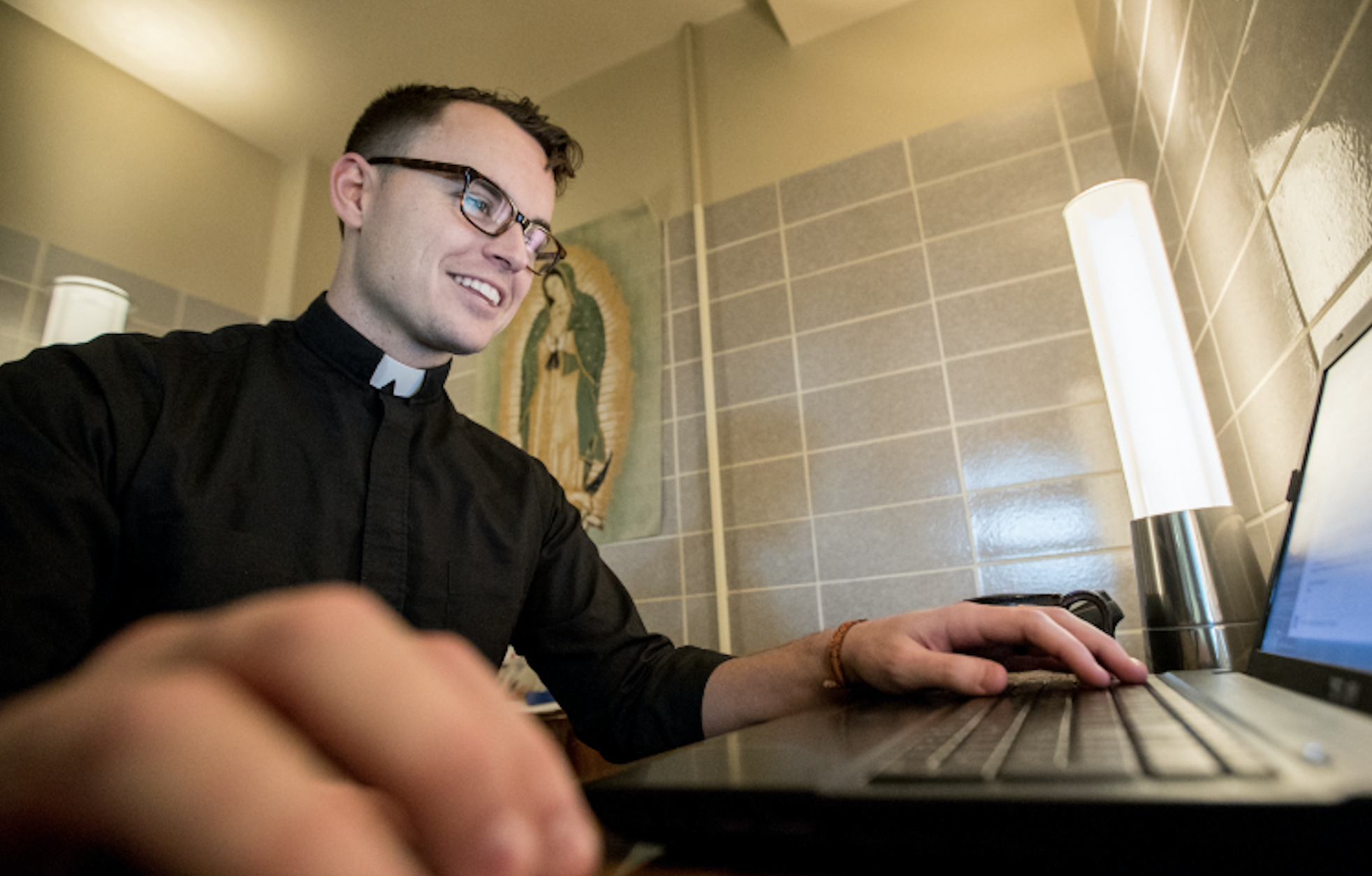 It must be said that Jesuit formation (as detailed by Saint Ignatius of Loyola himself!) is occasionally updated. In 2014, Father Adolfo Nicolás, SJ, then Superior General of the Society of Jesus, issued a letter calling for the renewal and revision of the intellectual formation of scholastics and Jesuit brothers. In response, the seven Jesuit conferences, including that of Canada and the United States, worked to adapt the Superior’s guidelines to their own realities.

The revised program emphasizes four essential elements that are integrated into the five stages of Jesuit formation. These elements, or “4Cs,” are: understanding the context of mission, exploring the content of faith, developing ministerial competence, and deepening the Jesuit charism.

Changes are already being implemented in the centres of the Conference of Canada and the United States, including a new program that aims to ground Jesuits in the Canadian mission.

The importance of studying in the Canadian apostolic context

In their first studies, in addition to the philosophy curriculum (especially the fundamentals, such as metaphysics, epistemology, and ethics) mandated by the Church, young Jesuits in formation, both scholastics and brothers, study history, religious studies, and social sciences. “Added to this is theological analysis of the context and the social teaching of the Church. The deeper understanding of the content of the faith to prepare for ordination will come later. Finally, to properly integrate the intellectual, spiritual, and social dimensions, there is a practical apostolate that includes personal and communal discernment to guide this process of integration,” explains Fr. Gilles Mongeau, SJ, socius and head of formation for the Jesuits of Canada.

Thus, after the process of spiritual deepening during the Jesuit novitiate, the first studies allow for an intellectual deepening of the mission context through study and part-time ministry.

Why is this process of deepening important? “Spiritual tools such as communal discernment, which helps us to read the signs of the times, are only as useful as the intellectual analysis that we bring to this discernment,” explains Fr. Gilles. “Thus, we need refined intellectual tools that allow us to better understand important questions, such as context-specific cultural issues.”

With the revision of the first studies programs, Canadian Jesuits in formation are now sent to the United States or France. This development does not allow them to deepen their understanding of the context of mission in Canada, with its particular challenges, such as the history of relations between the peoples who make up the country (Indigenous–non-Indigenous, Francophone-Anglophone, new immigrants, etc.), interculturalism, interreligious dialogue in a secular context, ultramodernism, and so on. To resolve this problem, starting at the beginning of the 2021 school year, the Jesuits will do the first year of their first studies in Quebec City.

Quebec City, the crossroads of a bilingual, spiritual, and intellectual formation

On the linguistic level, English-speaking Jesuits will be able to perfect their French by studying at Laval University. Meanwhile, French-speaking Jesuits can take advantage of the written English courses offered at the university, before pursuing their first studies in the United States.

Quebec City is also home to the Centre de spiritualité Manrèse, which will provide the necessary support for the spiritual discernment linked to the process of intellectual deepening.

Finally, the Jesuits have positive ties with the Diocese of Quebec, explains Fr. Gilles, which is another advantage of the location.

Formation for Jesuits outside Canada

The new first studies program is not for Canadian Jesuits only but also for Jesuits throughout the Conference of Canada and the United States.

“That’s part of the revised program,” adds Fr. Gilles. “Students in every program in the United States must have an experience outside the American context. For the majority of young American Jesuits, it’s going to be in a Spanish-speaking context. But it is also important that young Jesuits who have a basic understanding of French come to understand Canada better. It’s important to integrate them into the full reality of the conference.”

The new Jesuit formation program, anchored in the “4Cs,” allows for a healthy tension between critical appropriation of the Jesuit tradition, discipline, personal responsibility with openness and humble attentiveness to the other, ongoing reflection, and collaboration with others. All this in a context that is not only global, but also Canadian.

Synodality in action with LGBTQ+ people at the Ignatian Spirituality Centre of Montreal
Earlier this year, during the first stage of the synod focused on local churches, the ISCM welcomed a group to have a spiritual conversation with LGBTQ+ people.
Story
Towards a Joyful and Humble Church: The Gathering of the Jesuit Province of Canada
Pilgrims Together, A Joyful Gathering with Ignatius of Loyola, brought dozens of Jesuits and many of their companions in mission to Midland, Ontario, July 29–31, 2022.
Story
Anchoring oneself to reach out to others
For Fr. Michel “Jim” Lefebvre, SJ, we are men and women for others, first of all, by listening to those closest to us.
Story