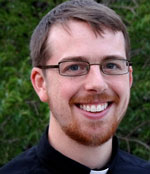 April 20, 2018 — Canadian Jesuit Deacon Adam Hincks was one of the first people in the world to read Pope Francis’ latest apostolic exhortation, a distinction that isn’t lost on the 36-year-old astrophysicist.

“All moments in the life of the Church are important,” Hincks told The Catholic Register by e-mail from Rome. “Sanctification can happen here in this very moment of history and in this very place.”

Hincks, an astrophysicist who specializes in the history of the universe, was selected by the Vatican to be one of four people asked to read an advance copy of the new papal document Gaudete et Exsultate. Along with a cloistered sister, a Muslim refugee from Afghanistan, and a former Italian actress and Catholic convert, Hincks was given a few days to read the 22,000-word document before being offered to the Vatican press corps for interviews during the April 9 release of the apostolic exhortation by Archbishop Angelo De Donatis, the Pope’s vicar in Rome.

When introducing major new documents or initiatives, the Vatican press office frequently organizes one-on-one interviews for reporters with a variety of people. This ensures that the picture of the Church which emerges in news coverage includes a broad spectrum of perspectives and not only the interpretations of bishops and theologians.

Hincks’ perspective is certainly broad, no surprise given his background. The Toronto native earned his first science degree at the University of Toronto and a PhD in physics from Princeton. He joined the Jesuits in 2009, studying philosophy at Regis College before continuing his studies of astronomy and physics at the University of British Columbia.

Hincks is finishing his theological studies in Rome. A date for his priestly ordination has not been set, but it’s likely to come in 2019.

The thing Hincks loves about the Pope’s advice is that it’s for everybody.

“It is aimed precisely at ordinary people,” he said. “As he says at the beginning, he is not writing a treatise but wants to ‘re-propose the call to holiness in a practical way for our own time.’ ”

In preparation for press interviews, Hincks concentrated on the most important strand of the Pope’s thinking rather than pick the exhortation apart for clues on particular issues.

“The Pope is inviting people to enter fully into their Christian faith in all aspects of their lives,” he said.

Hincks said he was well treated by the journalists in Rome and they mostly got the quotes right.

“The only (question) I wasn’t expecting, from an Italian journalist, was on whether the document has something to say to non-believers,” he said.

Hincks believes a parish study group or a college class could tackle Gaudete et Exsultate and apply it in their lives.

“His commentary on the Beatitudes, for instance, could make for great spiritual reading or spiritual discussion,” he said.

Though a lot of analysis has cast the Pope’s advice on living a good life against the fearful obsessions of populist politicians who rail against migrants and refugees — from Hungary’s Victor Orban to Washington’s Donald Trump — Hincks wasn’t thinking in political terms when he read the document.

“The Holy Father is simply restating the perennial Christian doctrine that every human life is sacred,” he said.

“In this sense it is not new. But by mentioning the unborn and the situation of migrants — as well as many other situations in which human dignity is threatened — he is highlighting issues for which this doctrine is particularly relevant and pressing today.”