That Fr. Lapierre would be so logical about entering triple digits is perhaps not so surprising for a former professor of philosophy and theology steeped in the logic of St. Thomas Aquinas and the spirituality of St. Ignatius Loyola.

Born in Chapeau, Allumette Island, Quebec, Fr. Lapierre was 19 with one year at the University of Ottawa under his belt when he turned up in Guelph, Ontario, to enter the Jesuit novitiate in 1934. Up until the day he walked in the front doors, he had never met a Jesuit, but he knew what he wanted. “Once you’ve made up your mind, you know,” said Fr. Lapierre.

Trained in systematic theology, Fr. Lapierre earned advanced degrees in philosophy and theology from Saint Louis University, and he received an M.A. in classics and a Ph.D. in philosophy from the University of Toronto.

During his academic career, Fr. Lapierre taught theology to young Jesuits from the 1950s to the 1990s at Regis College in Toronto. After 36 years as professor, he then was an emeritus professor at Regis College for 15 years. His scholarly pursuits didn’t end with the onset of old age — he published a short book in 1999 at the age of 85, “The Noetical Theory of Gabriel Vasquez, Jesuit Philosopher and Theologian (1549-1604).” 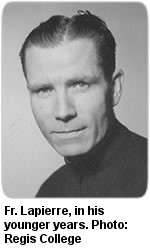 After half a century as an academic, Fr. Lapierre began ministering to his fellow Jesuits at the order’s La Storta residence in Pickering, Ontario. From 1968 to 2001, he served as the director of the Loyola Summer Institute for Spiritual Renewal in Guelph and Pickering. As a spiritual counselor, Fr. Lapierre had more to draw on than an academic interest in the consecrated life: in the late 1940s, he was diagnosed with cancer of the esophagus. Cancer was no trivial thing in 1947, but Fr. Lapierre recovered and carried with him the wisdom that comes with an encounter with death.

Like all Jesuits who make it to retirement, Fr. Lapierre was assigned to pray for the Society of Jesus in 2013, at the age of 97. Beginning his life in the middle of the First World War, growing up during the Great Depression and becoming a scholar during the Second World War, this 100-year-old priest may seem like a visitor from a strange land to young Jesuits born in the 1960s and 1970s. But to Fr. Lapierre, he’s just here, living his life. [Source: The Catholic Register]