June 15, 2020 — “It changed my life!” This phrase has come up in every conversation that I have had about Camp Lac Simon. Celebrating its 64th anniversary this year, the summer camp was started through a Jesuit initiative, and the Society is still, in the words of camp director André “DD” Courchesne, the “heart and soul” of the work. 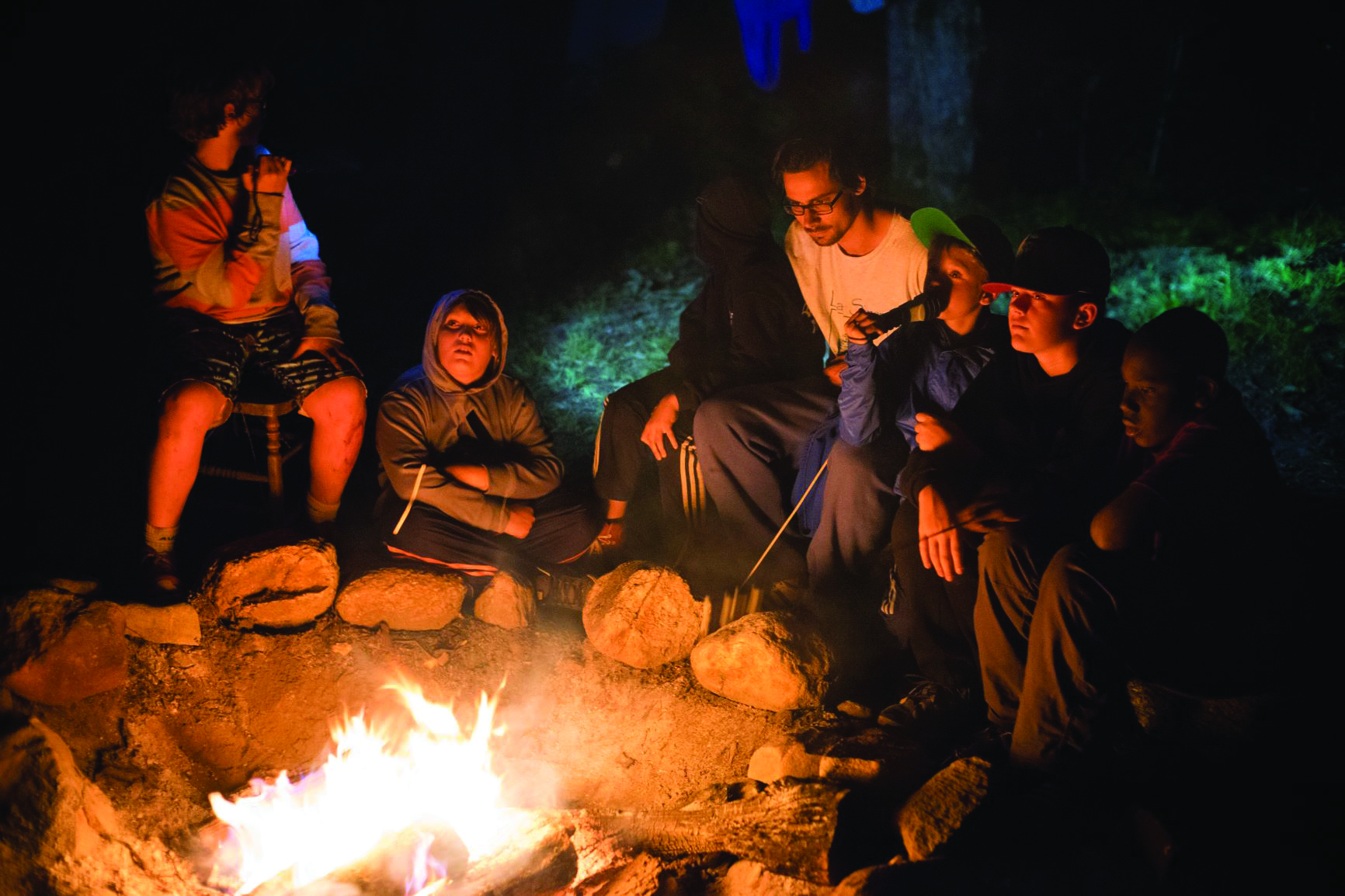 The idea behind the camp is to bring together volunteer counsellors (who are often well-to-do) from Collège Jean-de-Brébeuf and underprivileged young people between the ages of 9 and 15 from Pointe-Saint-Charles (Montreal) who have not had easy lives. Many, for example, are from single-parent families, have never left Montreal, or do not have easy access to cultural activities.

Several people involved in Camp Lac Simon offered to share their experiences of the camp. Enryck Arbour del Vecchio, who was a camper for four years, is still in school and would like, among other things, to train in paramedic care. Mathieu Floriot, a former camper then volunteer at the camp, is now one of its directors. Lucas Wise and Simon Guertin, both university students, were counsellors for several years.

Each interview was conducted separately, but many of the answers often resembled each other word for word! In short, the camp does not change the world, but it helps it move towards human greatness.

Not everyone is lucky enough to see pink clouds

After over sixty years of activity and working in a new context, is the camp still relevant? André did not hesitate at all before responding. “Today, the camp is more relevant than ever. In 2020, people have more electronic media but fewer moments of introspection. At the camp, there are no electronics, but there are moments when we pause. We reconnect with who we are and with nature, too.” He then described a striking example of a scene that occurred between a former Brébeuf counsellor and a young camper after a beach activity. 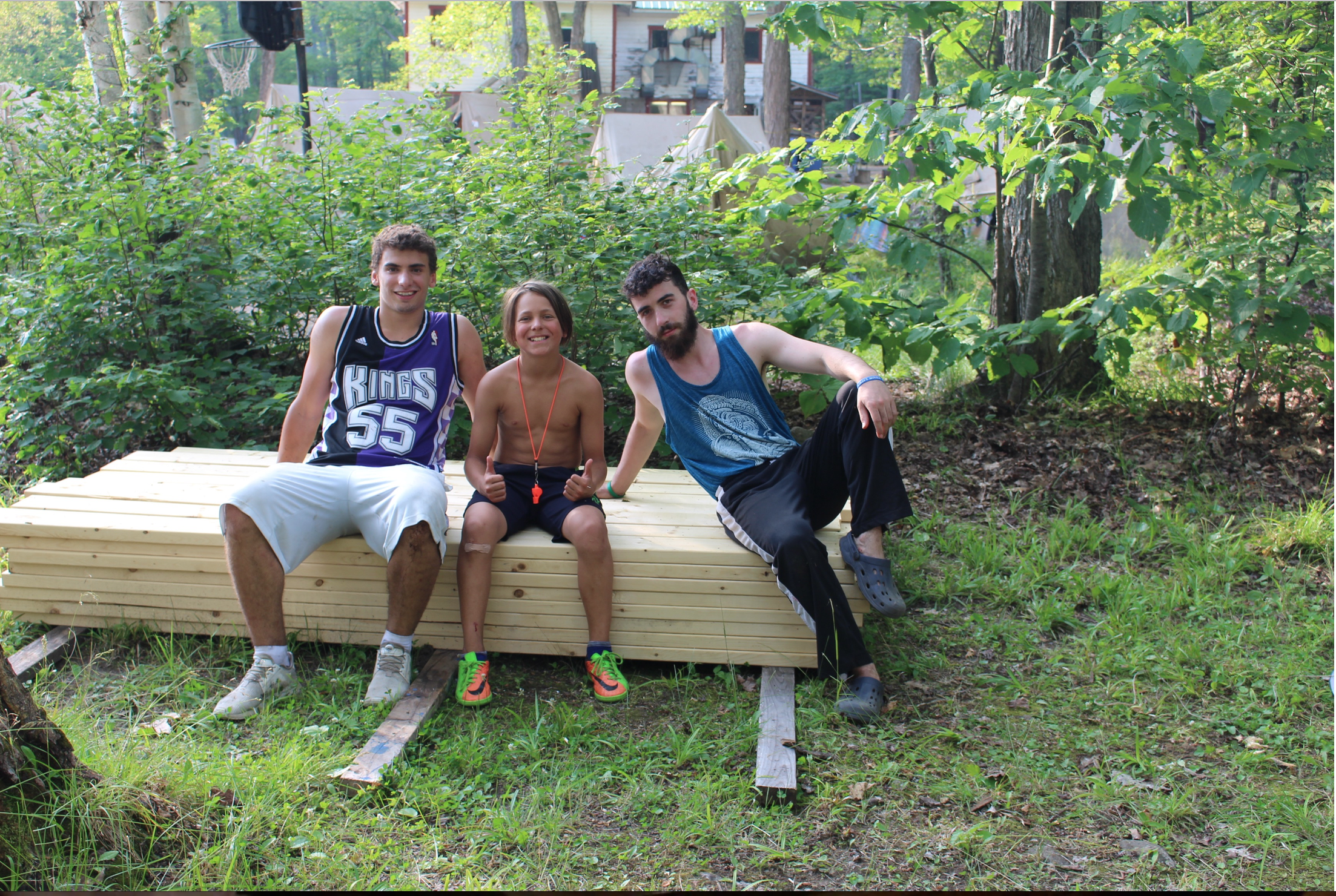 “The group is ready to leave, but one of the campers refuses to go. The counsellor insists, and the little boy says, ‘No way! Look, we should stay here, it’s so beautiful!’ The counsellor asks, ‘What are you looking at?’ ‘THAT!’ the boy says, and gestures to the lake and the sky. For him it was the first time; he was in full contemplation. It really astounded the counsellor, and he said, ‘It was on that day that I realised that not everyone is lucky enough to see pink clouds.’” 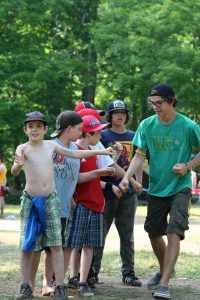 In André’s experience, the camp is important if only because it awakens the young campers to the hope that there is something better than the street, or because it helps Brébeuf students become more aware of other social realities. It teaches everyone to be better in their relationships with others.

“We don’t change the world at Lac Simon, but the campers really appreciate these two weeks,” added Simon Guertin.

Impact on the campers

Mathieu Floriot is a striking example of the impact of Camp Lac Simon. “The global experience of the camp, where we learn to push ourselves and excel, is something that has helped me a lot in my life. When I returned to the camp for the first time as an adult, I remembered everything I had been through and, I have to admit, it was very moving. The camp will always be a part of who I am.”

For Enryck Arbour de Vecchio, the most beautiful moments at the camp were when everyone was together. “At the lake, everyone is at the same level. It’s just awesome because, at the camp, you can disconnect from the world for two weeks and spend time with good people. You discover who you are because you have the time to think, because you don’t need to worry about anything else. You go there to have fun.”

Impact on the counsellors

The contemplative and relational experience of Camp Lac Simon changes the ways in which the people involved see the world and, sometimes, it affects the choices they make. This is the case not just for the campers but for the counsellors, too. Although Simon Guertin went for fun, he realised the extent to which the camp allowed him to make his own contribution to the campers.

“The camp experience completely changed my life, especially in terms of my studies. [He is now a student in psychoeducation.] I was at Brébeuf and was planning to go to business school at HEC. When I went to the camp, I had a revelation about social inequalities and about how lucky I had been. It really shook me, and my mission ever since has been to reduce the level of these inequalities.” 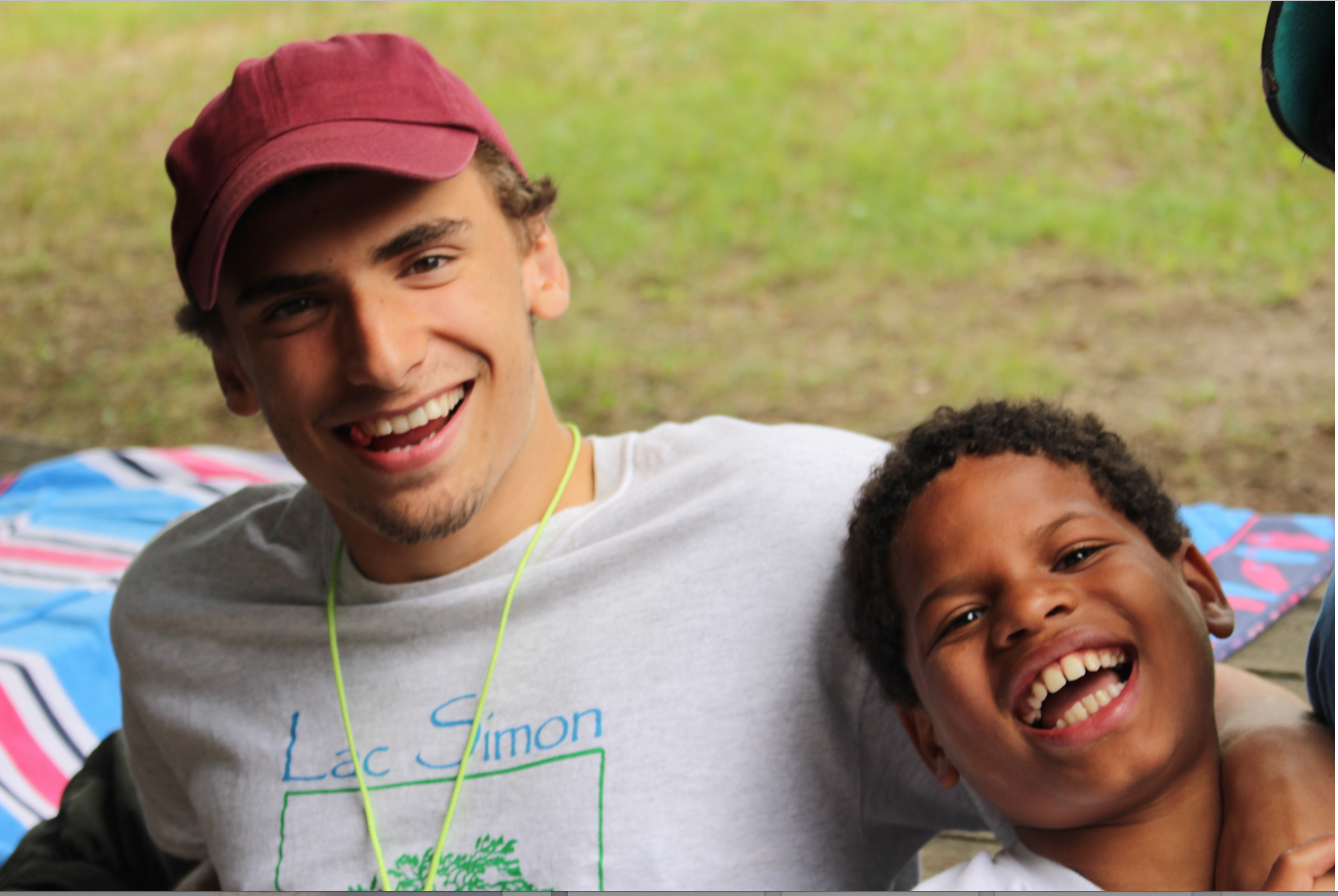 Camp Lac Simon also had an impact on Lucas Wise’s career. “During my stay at the lake, I developed a work ethic and perseverance that have stayed with me till today at school and at work. My two years as a cook have also contributed to my passion for all things food-related, which is the subject of my master’s degree. I am looking to find innovative chemical methods to avoid and transform food waste, something that is promoted at Camp Lac Simon.

“It’s always a special moment when a camper comes to me on his last day to hug me and cry.” This testimony from Simon Guertin sheds light on the bonds forged at the camp that can last for years. André, for example, has known a camper since 1979–80 and is one of his best friends to this day. “It’s also important to understand that when you hold the hand of one of these kids, you aren’t allowed to let go.” 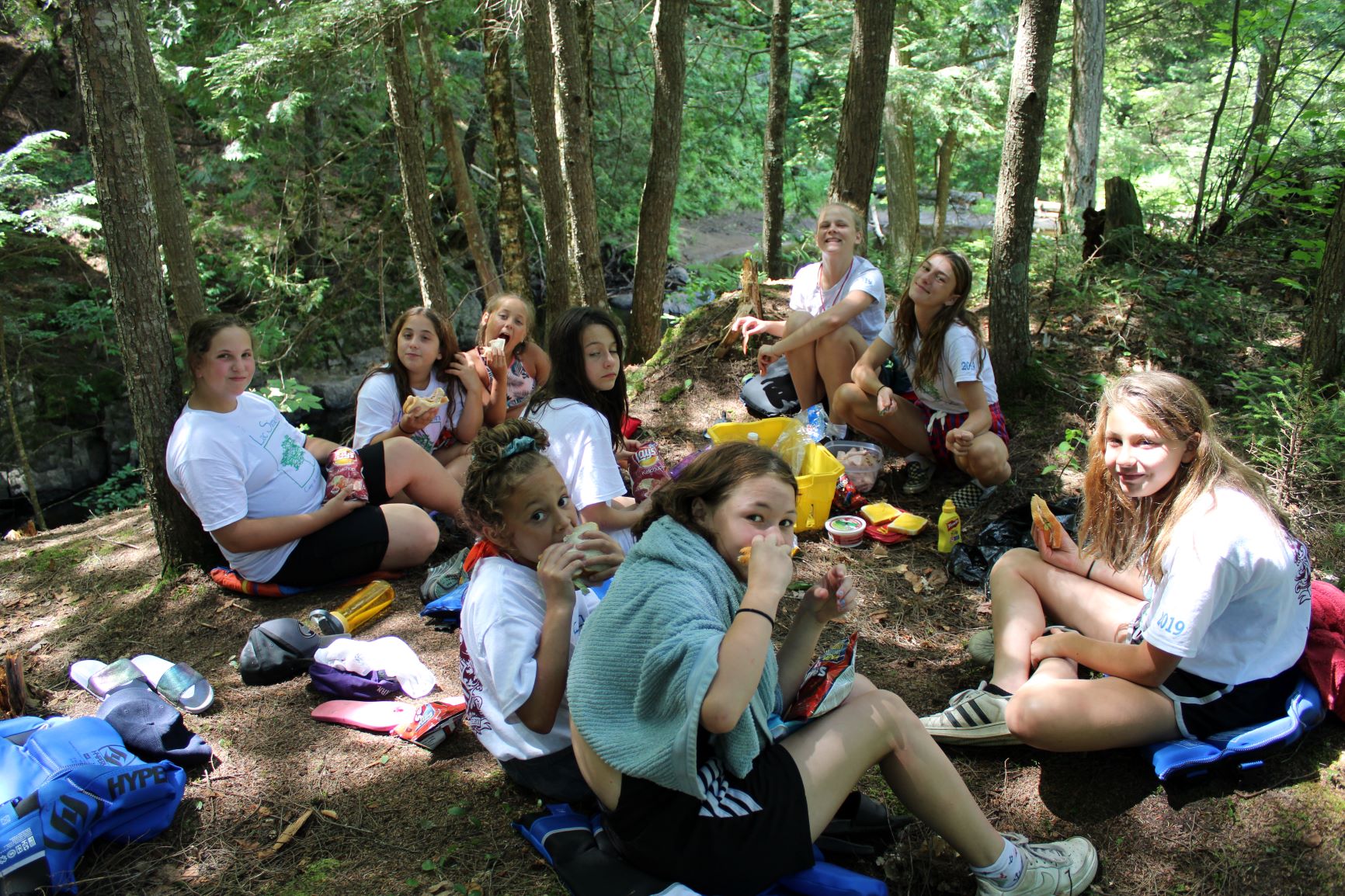 Enryck Arbour del Vecchio agrees: “Every year it’s fun to see the counsellors again. Even today I still see some of the counsellors and André. It’s not just a simple two-week camp. These are people who will stay in my heart for the rest of my life, who I will continue to see, who have only brought goodness into my life and who support me.” This support is also there for the counsellors such as Lucas Wise, who remembers receiving “incredible support from the community at the lake when I left, when things got difficult for me. It’s impossible to express how much I appreciate this support, even to this day.”

We will end this article with a word of advice for young people from Enryck Arbour del Vecchio: “You can’t be afraid to try new things. I was really scared the first time I went to the camp, but I would have regretted not going. New things can bring good things into your life. The camp changed my way of thinking and my way of acting.”

Journeying  with Youth at  Cowork Magis:  A Space for Start-ups in Paris
“It’s not about working for young people but with them.” Listening to Fr. Grégoire Le Bel, SJ, talk to us about Cowork Magis, we were almost ready to move to Paris and jump right into the world of business. After receiving a mandate from his provincial, Fr. Le Bel set up a coworking space in collaboration with a group of young people, first taking one office, then another, and finally an entire space designed according to the needs of these entrepreneurs.
Story
Journeying with Youth at Cowork Magis: A Space for Start-ups in Paris
What is Cowork Magis? First and foremost, it’s a workspace, a place of work for young, self-employed entrepreneurs and freelancers to develop their businesses in the best conditions.
Story
On life, laughs and lenses: Marc Rizzetto, SJ
Before our interview, I had beenwas told that Fr. Marc Rizzetto, SJ, was very funny, very deep, and also…very busy... Nothing I learned in the interview that I finally managed to have with him did anything to dispel these rumours.
Story
Scroll to Top
X
Tweet
Share
Pin