Blessed to have a second vocation: Brother John Masterson, SJ

Brother John Masterson is profoundly grateful for the opportunity for a second vocation of prayer at René Goupil House, the Province Infirmary, in Pickering, ON.

“I didn’t realize that the prayer apostolate would be such a wonderful one,” says Brother Masterson. “This apostolate is one of the most important things I could be doing.”

Even at age 87, Brother is grateful to have this much-needed vocation — spending time praying for those around him and the many intentions the Jesuits receive from friends and donors. Ironically, he had wondered what he would be doing when he first arrived at ‘the end of the line,’ but he has found great joy in the infirmary’s daily Mass, prayer, and God’s loving care.

Born in Chesterville, eastern Ontario, an area rich in farmland, Brother had no interest in continuing the very demanding family business of dairy farming. One of eleven children, Brother considered the priesthood from a young age. It was something encouraged and the extended family tree boasted many nuns and priests, including a sister who is with the Sisters of St. Joseph. 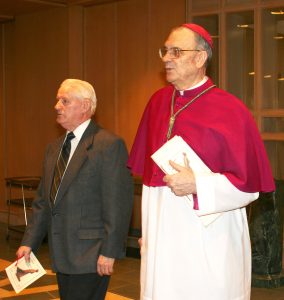 Entrance into the Society of Jesus was not immediate and Brother initially followed some family members to Toronto and found work at the Toronto Transit Commission, (TTC), as a mechanical technician for buses and streetcars. As much as he enjoyed his work, after four years, religious life called, though he was worried he didn’t have the academic skills required to enter the Jesuits.

“People were surprised when I left the TTC, telling me I would never have a well-paid job like that again,” Brother Masterson says. But he adds, “It wasn’t about the money, it was about salvation.”

He loved the Jesuit novitiate in Guelph where he found peace and joy among the vast farmland and apple orchards. He was a jack of all trades, from assisting the cook, to caretaking, maintenance, and mechanical work. When the furnace stopped working in winter, he was the most important person around he says.

Brother’s work took him to many different places including Regis College, Brebeuf College, residences in Toronto and Pickering, and the Jesuit Novitiate in St. Paul, where he recalls very fond memories.

“I enjoyed spending time talking with novices about some of the challenges they were facing like temptation and depression,” says Brother Masterson. “You go through times of desolation when you first join — but a good spiritual director can explain that evil is trying to enter and you pray that God will be with you and guide you.”

As for any advice to young people considering a vocation in the Church, Brother Masterson says, “Consider and reflect on your life and how you want to spend it. The most important thing to consider when deciding what to do with your life is how and where you give God his rightful place in your life.”