Being a Byzantine Jesuit 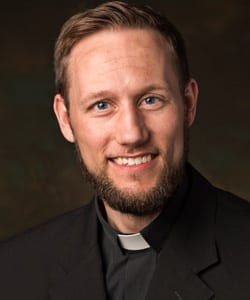 “If you’re not Roman Catholic, how can you be a Jesuit?” I hear it often. Like a fish in water, many Catholics grow up surrounded by a Church they know and love, without reflecting on what makes the Church the Church. Explaining to others how this is possible, I re-explain it to myself, remembering how blessed I am.

The word “catholic” means “universal,” not uniform. The Church is made up of many Churches in communion with each other, united by faith and sacraments. How those sacraments are enacted differs within the culture of each sister Church.

There are barely 18 million Eastern Catholics in the entire world, compared to one billion Roman Catholics. While the Jesuits are predominantly Roman Catholic, a Jesuit can belong to any of the 23 Eastern Catholic Churches that share full communion with Rome and each other. My Church is the Byzantine Ruthenian Catholic Church, with just over half a million believers in the United States. We trace our origins back to the apostles and first generation of Christians who brought the faith to Byzantium, a small city on the Bosphorus, that later grew into Constantinople, the Roman Empire’s Eastern capital. This Church spread to the Carpathian Mountains region, where Slovakia, Ukraine, Poland, Romania, and Hungary meet. My grandfather was one of millions of immigrant Slavs who brought the faith to the United States.

I did not choose this Church; I inherited it. Had my grandfather been born a few miles south and west, I would be ordained next summer in a Roman Catholic Mass with a dozen classmates, instead of by myself in a Byzantine Divine Liturgy. The faith is a gift, passed down from generation to generation, poured into me at baptism. It is a challenge I never asked for, yet I would be incomplete without it.I have been inspired and challenged by other Byzantine Jesuits, like Fr. Walter Ciszek; Fr. Robert Taft; our former Superior General, Fr. Peter-Hans Kolvenbach; and, closer to home, Fr. Larry Ober; and my classmate, Andrij Hlabse.

People sometimes wonder if I feel a sense of belonging to two worlds or to none, perpetually trying to make two incompatible Churches fit together. It is the same challenge every Christian faces: how to live in a world or community where the mystery of the other is never exhausted, where we do not completely understand each other but still know we are all connected.

I am blessed to reap the rich harvest of two ancient traditions. After ordination, I will request bi-ritual faculties to celebrate in the Roman Catholic Church, just as some of my Jesuit classmates may request bi-ritual faculties to serve in the Byzantine Church. Though there are many traditions in the Church, Byzantine Jesuits are a reminder that there is only one altar, one priest, and one sacrifice. There is one Church, and I am humbled and grateful to share in it as a Jesuit.

Cyril Pinchak, SJ, is studying theology at Regis College in Toronto. He was ordained a deacon in the Byzantine Church this summer and will be ordained a priest in 2017.