A man for others

Mark DesRoches has fond memories from his Catholic upbringing that guide his life to this day.

“I remember my mother kneeling beside my bed teaching me how to say my evening prayers,” says DesRoches. “As a child, my father always wore a suit to Sunday Mass and you were expected to be there as it was and is a holy day of obligation.”

DesRoches is the youngest of four boys born to Frances Marion Corby DesRoches and Ayre Brebeuf William (Bill) DesRoches, who were happily married for 64 years and who instilled in him his Catholic faith.

As a teen, the Toronto-native attended Brebeuf College High School which was founded by the Jesuits in 1963. There he was inspired by the Catholic values instilled by the teachers, both priests and laity. Each student was treated as a child of God – with great dignity, he says. He fondly remembers educators like Jesuit Fathers Brian Massie, Winston Rye, and Don Beaudois.

He later attended the University of Guelph, ON, where he became involved with the University Catholic Community (UCC). There the inherent worth and human dignity of each individual was stressed and affirmed. He became a member of a community of persons with the same goal, he says, to give “greater glory to God.”

At Brebeuf College each student was treated as a “ child of God.”

DesRoches has attended silent retreats at Loyola House in Guelph and Manresa Jesuit Spiritual Renewal Centre in Pickering, ON. What struck him the most about the retreats he attended is the Jesuits’ profound respect for the importance of silence while on retreat.

“It is through silence that we come into an intimate union with our loving God,” says DesRoches. “It is in the silence that we hear the gentle promptings of the Spirit.”

DesRoches has been a fixture at many pre-pandemic Jesuit events including the annual Jesuit Provincial’s Dinner, the beer tasting, and a variety of lectures. 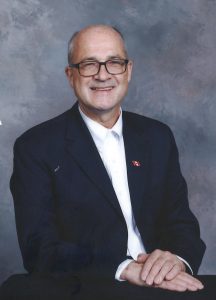 DesRoches’ generosity to the Jesuits has come in the form of scholarships, one in his own name and one in the memory of his late parents, as well as financial assistance to the René Goupil Jesuit Infirmary, the Jesuits in Haiti, and Martyrs’ Shrine in Midland, ON. One of his favorite prayers comes from St. Ignatius of Loyola:

Lord Jesus, teach me to be generous; teach me to serve as you deserve; to give and not count the cost; to fight and not heed the wounds; to toil and not seek for rest; to labour and not seek reward, except that of knowing that I do your will.