JRS commemorates 35 years of accompanying refugees around the globe

March 19, 2015 — In 1980, a refugee crisis seized world headlines. Vietnamese were fleeing their county in anything that could float, and images of the “boat people” were seared into many peoples’ hearts. Father Pedro Arrupe, SJ, then-Superior General of the Society of Jesus, was one such person. He motivated Jesuits around the world to respond to the crisis, and the Jesuit Refugee Service (JRS) was born. The organization’s motto — to accompany, serve and advocate — distinguishes JRS from other refugee-service agencies and is the foundation for its response to other refugee crises throughout the world. As JRS celebrates 35 years, it also prepares to welcome a new International Director to its headquarters in Rome. 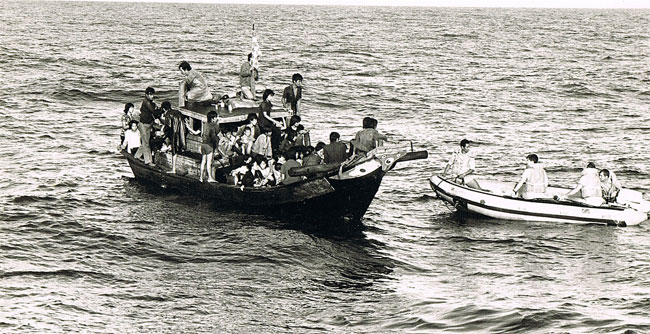 In the late 1970s, Fr. Pedro Arrupe, then-Superior General of the Society of Jesus, was moved by the perilous journeys of the Vietnamese boat people. (Jesuit Refugee Service Asia Pacific)

German Jesuit Father Peter Balleis is finishing his eight-year term as JRS International Director this year. Fr. Balleis worked extensively in southern Africa before moving to Rome, and under his leadership, JRS is now present in Iraq and Syria, among other recent refugee crises. But most of JRS’ work is where the needs of refugees have been served for many years.

One such place is the Democratic Republic of Congo (DRC); JRS has been present there since 1995. A civil war that took at least five million lives, rich mineral resources in demand throughout the world and a national government incapable of defending and promoting its own interests have made for an ongoing crisis of over one million Congolese displaced in their own country and in neighboring lands. 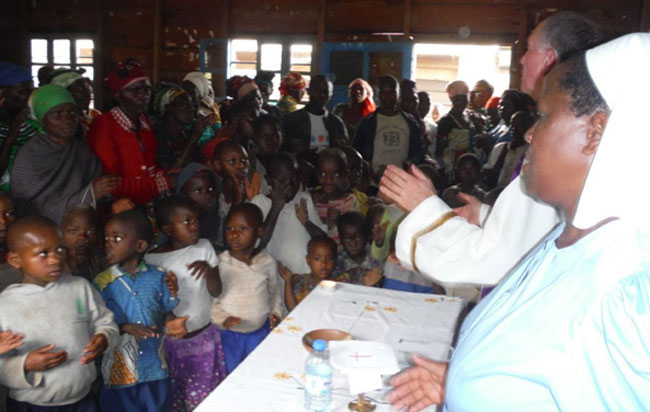 Fr. Balleis’ successor as International Director, Father Tom Smolich, SJ, is currently immersing himself in JRS’ mission by accompanying refugees in DRC. Fr. Smolich, a California Province Jesuit who finished his term as President of the Jesuit Conference last year, is spending four months in the town of Masisi in the North Kivu Province, learning from refugees and staff about what it is to “be part of JRS and how I can best serve in my new assignment.” While he’s there, Fr. Smolich is working as the JRS Bureau bookkeeper and accompanying refugees in the camps — as well as learning to speak French and read Swahili. 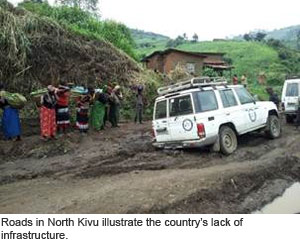 Reflecting on his first few weeks in DRC, he has been struck both by its stunning beauty and how difficult life can be. “Instability is the rule,” he says. “There are at least 26 rebel groups/militias/gangs of thieves operating in North Kivu. Just last week, one of the parish priests was murdered in Mweso, another North Kivu town where JRS works. The Congolese government is ineffective at best, and UN peacekeeping forces are a dominant presence.” This reality is made worse by the lack of infrastructure. “Imagine the worst road you’ve ever been on, and lower your expectations considerably,” is Fr. Smolich’s description of travel in rural North Kivu.

Most of those living in the camps around Masisi and Mweso are from other parts of DRC, driven from their homes by conflicts over mining or by militia groups using their villages as bases for violence and criminal activity. Some were driven out of neighboring Rwanda during or after the 1994 genocide and lack the means to return home. 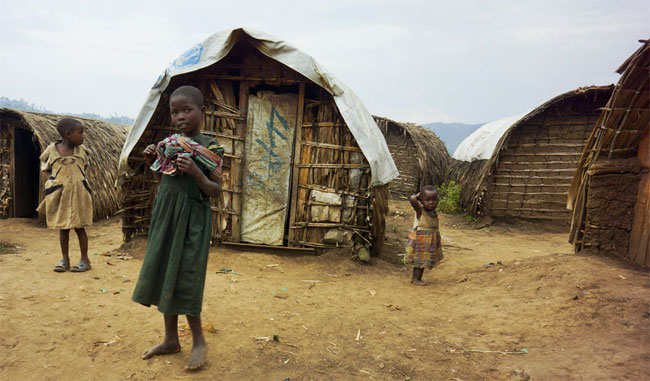 “Living in rural North Kivu likely means having a small plot of land and subsistence living or something close to it,” Fr. Smolich notes. “For displaced families living in camps without land or economic resources, life is even more difficult. One-room huts are made of wood, bamboo and banana fronds, with gaps plugged by mud and cloth scraps. Most have plastic or canvas roofs stamped with the donor’s logo. They are simple at best.”

Working in seven refugee camps in and around Masisi, JRS offers services to displaced people in each community: education; pastoral counseling and psycho-social accompaniment; supplies and services for the most vulnerable; and income-generating training, such as carpentry, soap making and hairdressing. JRS’ focus on formal and informal education helps provide structure and normalcy to lives destroyed by war.

Sister Esperance Hamuli, a Congolese Ursuline Sister of Tildonk who is the JRS Masisi Education Coordinator and Fr. Smolich’s colleague, explains: "To me education is about dignity. It’s about giving children — who have nothing — a way to engage in the society around them and do something with their lives besides contribute to the violence that surrounds them.” 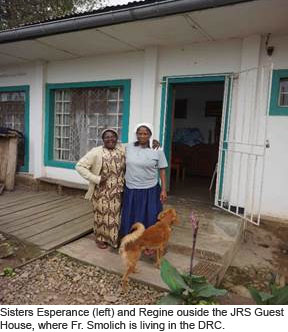 At the JRS compound, Fr. Smolich lives in community with Sr. Esperance, Sister Regine Massige, a Tanzanian member of the Sisters of Good Counsel of Barara, Uganda, and Luis Vizcaino Guevara, a Mexican Jesuit scholastic. He offers this description of daily life: “We have hot running water from a storage tank; we purify drinking water in what looks like a giant coffee urn. We celebrate mass at 6:30 a.m., 7 a.m. on Saturday. There is 24-7 battery power for the essentials (small refrigerator, Internet access and a few lights in common areas) and a generator running evenings from 6-10 p.m..”

As JRS’ gestioner — bookkeeper and cashier — Fr. Smolich has a bird’s eye view of the operation and now knows the impact of the small stipends received by refugees who collaborate with JRS. “I am overwhelmed by their gratitude for what they have earned,” he comments. “They remind me of God’s grace always at work, especially in people whom the world tries to forget.” 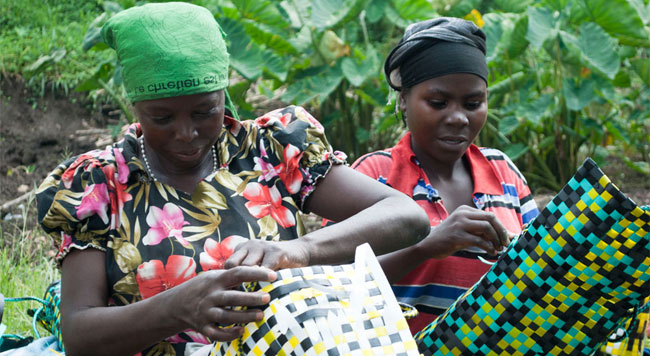 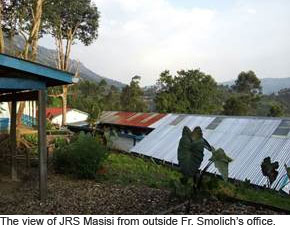 He has also become part of JRS-Masisi’s religious accompaniment as the presider at Masses in the camps. “I don’t speak Swahili beyond a few words. But I have learned to read and pray the liturgy in Swahili, and Sister Regine offers the scriptural reflection,” says Fr. Smolich. “Last week she commented on the need for reconciliation and sharing within the camp. I hope people can look to JRS for spiritual assistance as well as practical help for living.”

Fr. Smolich is grateful for the opportunity to work with refugees in Masisi. “It was Fr. Balleis’ idea to send me here. I’m getting the best preparation possible, and I am honored and excited to succeed him.”