March 7, 2016 — With just a tiny bit of prompting, six-year-old Thomas LaFrance can rattle off an ancient blessing for a meal in perfectly pronounced Latin.

Technically a dead language, Latin is alive and well in Room 225 at St. Paul’s College at the University of Manitoba, where Thomas, his older sister, and two dozen other home schooled Catholic children decline nouns, conjugate verbs and build simple sentences.

Children from 10 home-schooling Catholic families attend the Friday afternoon classes, which open in the college chapel with a prayer and short meditation by Burwell, a Jesuit priest. Then the students, grouped by age, alternate between Burwell’s Latin class and one taught by piano teacher and musician Ljiljana Farkas, where they learn how to read music, sing Gregorian chants and compose music of their own.

"It’s not as common in North America, but we’d like to reintroduce our children to their Latin roots," explains home-schooling parent Maria Cotter, who organized the Latin program, which runs from September through May. 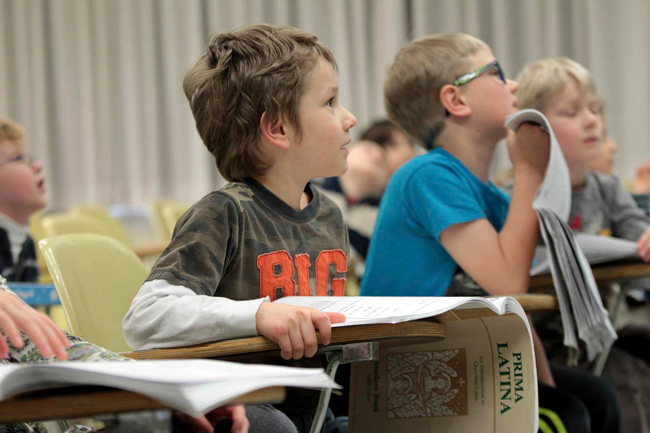 Latin is often referred to as a "dead language" because the patterns and rules don’t change, but for centuries it was the language of literature, the church, and the people, says Burwell, who teaches his students the Lord’s Prayer and table blessings in Latin, in addition to vocabulary and grammar.

"The textbook teaches the prayers in Latin and there’s a strong ecclesiastical component to it," he says, referring to how the Catholic Church still includes some Latin in its liturgy.

And his students continually surprise him with their eagerness to learn the language and to make connections between Latin and English.

"One of the six-year-old kids came into class and said ‘Submarine. Sub means under and marine means water,’" explains Burwell, who drills students on nouns, verbs, adjectives and prepositions throughout the class.

After only half a year of study, those lessons are already hitting home in practical ways for the students, who range from six to 17.

"What really surprised me in Latin was how many English words were derived from Latin," says 17-year-old Gloria Nikolic, the oldest of four sisters studying Latin.

"We’ve been incorporating it in our prayer time (at home) when we say grace or night prayers."

"I go to a Latin mass and I serve there, so I have to know the language to respond to all the prayers," adds Tomas Pena, 13, who attends Winnipeg’s only weekly Latin mass at St. Ann’s Roman Catholic Church. 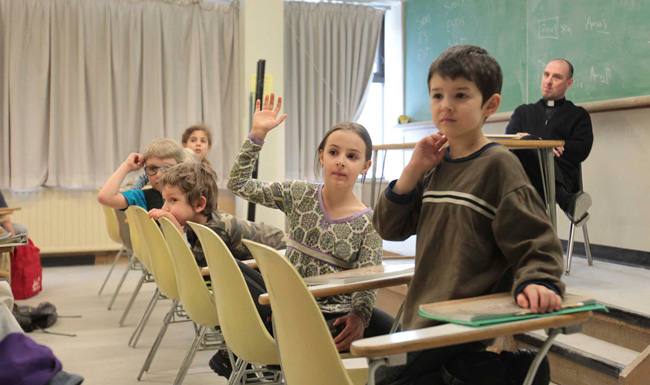 And beyond that, the Latin lessons help students in their study of other disciplines, such as biology or anatomy, says Rosalie Madden, who has three of her seven children enrolled in Latin.

"It stretches their brain and it is so connected," says the Ste. Anne resident, whose family has French and German roots.

"We’re already making the connection between Latin and French."

Those weekly drills of sum, es, est, sumus, estis, sunt (the conjugation of the verb "to be") are making an impact beyond the students, says Burwell, who notices the mothers in the back of the room taking notes and listening attentively to the lessons.

"This could continue to grow. I know lots of adults who would be interested in taking a class," says Burwell, who studied Latin as an undergraduate.