For Jesuits, love is where the conversation begins 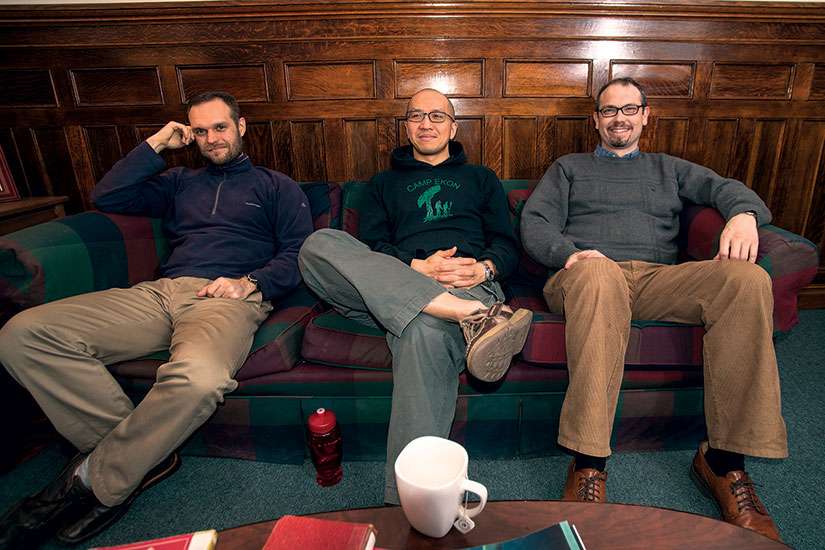 Over the last 30 years, spurred on by the Internet, this Jesuit conversation about love and vocations has often been pulled into focus by this compelling nugget of words:

“Nothing is more practical than finding God, than falling in love in a quite absolute, final way. What you are in love with, what seizes your imagination, will affect everything. It will decide what will get you out of bed in the morning, what you do with your evenings, how you spend your weekends, what you read, whom you know, what breaks your heart, and what amazes you with joy and gratitude. Fall in love, stay in love, and it will decide everything.”

The quote, often mistakenly attributed to the Vatican II-era Father General of the Jesuits, Fr. Pedro Arrupe, is from an address given in 1981 by Fr. Joseph P. Whelan, former provincial superior for the Jesuits of Maryland in the United States.

Today it is still a compelling prayer about love and vocation, and a talking point for three Canadian Jesuits who, in a conversation with The Catholic Register, recalled how the words affected them as they began Jesuit life together in Montreal in 2008.

The practicality of love is an idea that pushed them on as they discerned what it would mean to live poor, chaste and obedient within the Jesuit tradition.

None of them recall the falling-in-love speech as the clinching argument that made religious vows inevitable. But Edmund Lo found good sense in the thought that falling in love is the pathway to something more in life.

“What get’s me up in the morning? Is it that first cup of coffee?” asked Lo. “Well, it had better be a really, really good cup of coffee.”

Lo had his Master’s degree in neuroscience from the University of British Columbia and had landed a place as a neuro-ethics research intern when he found his way to the Jesuit vocation office. There were a number of career paths open to the 26-year-old in 2008. Now 35, Lo is studying for an advanced degree in ethics and will be ordained a deacon at Toronto’s Our Lady of Lourdes parish on May 20.

One thing that became crystal clear to Lo as he worked through the stages of Jesuit formation — from the 30-day silent retreat through studies in philosophy and theology and years of work in a Jesuit community — is that a vocation isn’t an escape from the world.

Jesuits have written books about what they mean by desolation and its corollary, consolation. The one sure thing about desolation is that it doesn’t have much to do with falling in love.

At 40, John O’Brien is the eldest of the young Jesuits. He will be ordained a deacon April 8 and then nudged up into priesthood just six weeks later. At that point, the Canadian province of the Jesuits will put him to work promoting vocations.

Whelan’s falling in love speech isn’t necessarily something O’Brien would use with every candidate for Jesuit life he comes across. But for the right candidate that speech might help, he said.

“Love has to be part of the conversation,” O’Brien said.

O’Brien took on the task of discerning his vocation with great seriousness. He spent a year studying philosophy in Rome before deciding on the Jesuits, and they on him. But it was only at the end of the 30-day retreat in his first few months of Jesuit life that O’Brien got a hint of what Whalen had really meant by falling in love with God.

In the last week of the retreat, St. Ignatius assigns a prayer that many people find difficult to pronounce when they really think about what they’re saying. Known by its Latin name, the Sucipe, it asks God:

“Take Lord and receive all my liberty, my memory, my understanding, my entire will — all I have and call my own. You have given all to me. To you Lord, I return it. Everything is yours, do with it what you will. Give me only your love and your grace. That is enough for me.”

Surrendering every possible feature of a personal identity is not an impulse we easily embrace, but the prayer offers a deal, a bargain with God, and O’Brien sensed he might be getting the better of the deal. What more could he want than God’s love, God’s grace? Would God’s love and grace ever rob him of his identity?

“My own vocation story was a lot about listening,” said O’Brien.

For the youngest, 32-year-old Artur Suski, a Jesuit vocation is all about freedom — the joy of freedom and its burdens.

“There is also great freedom in knowing your call,” he said.

Falling in love with God isn’t something that happened to Suski in a fell swoop upon entering the Jesuits. Rather, that love always seemed part of his life growing up and stayed with him after graduating from Hamilton, Ont.’s McMaster University with a degree in molecular biology.

“Like marriage, you grow into it. … Sometimes, you’re very thankful for your vocation.”