Father Jean-Marc Biron, SJ: The Grace to be Free

February 18, 2015 — In 1989, when Father Jean-Marc Biron, who had served as a diocesan priest in Quebec for 23 years, asked his bishop if he could leave the diocese and join the Jesuits, the answer was swift and sure. Non, je ne veux pas que vous entries chez les jésuites.

No.  I don’t want you to join the Jesuits.

And why would his bishop say anything different?  Fr. Biron was a veteran pastor, beloved in the Trois-Rivières region of Quebec, where he had lived and worked his whole life.  Instead of agreeing to Fr. Biron’s request, his bishop assigned him to a new parish, thinking that was that.  Except it wasn’t. 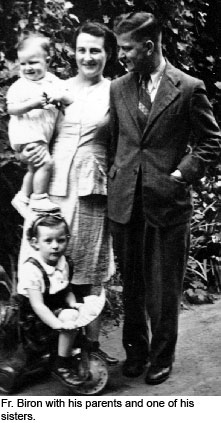 Although Fr. Biron willingly began his new ministry at the parish, he was convinced that God was calling him to the Jesuits.  And one year after being refused by his bishop, it was clear that Fr. Biron’s desire had not diminished.  When the bishop acquiesced and he was released to join the Jesuits, Fr. Biron reported directly to the Jesuit novitiate in Montreal — a  novice at age 47.

So what was it about the Jesuits that made Fr. Biron so want to join their company?  Their spirituality.  “Ignatian spirituality was what I practiced my whole life, but I didn’t have a name for it.  But the more I started reading the writings of St. Ignatius, the more I questioned my own sense of freedom to be able to say to God that ‘if your will is that I should leave the diocesan priesthood, I will accept.’  God could ask me anything.”

The son of a journalist and a teacher turned homemaker, Fr. Biron’s world was so culturally Francophone that he was 15 before he heard his first words in English.  One of four children, Fr. Biron had two sisters and a beloved younger brother, Guy, who suffered from heart disease and was gravely ill his whole life.  Even today, more than four decades after Guy’s death at the age of 18, Fr. Biron speaks with tremendous emotion about the brother who was “the joy and the sun” of the family.

Fr. Biron’s parents were “people of dialogue, conversation and openness,” who helped nurture those same qualities in their children.  After Mass, the family would gather for brunch, spirited conversation and classical music, a passion for Fr. Biron to this day. 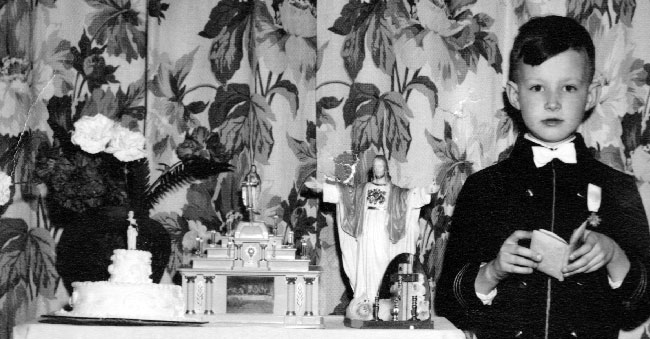 Fr. Biron on the day of his First Communion.

In a city where “99 percent of Catholics went to Mass weekly,” the Birons took their faith seriously.  There were several uncles and aunts in religious life, and Jean-Marc began discerning his own vocation at a young age.  At 20, he entered the seminary and was ordained a diocesan priest in 1967.

He loved parish ministry and served as a pastor at three different parishes before earning a one-year sabbatical. While on sabbatical, Fr. Biron did a 30-day retreat at the Jesuits’ Manresa Spirituality Centre in Quebec City.  It was a perfect fit because he was looking for additional training in spiritual direction while also seeking spiritual renewal.  The unexpected grace of his retreat:  a very powerful call to be a Jesuit. 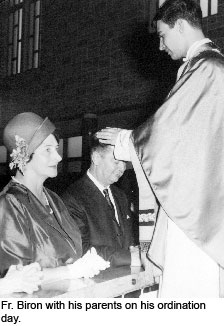 The call was a surprise for Fr. Biron, who had never contemplated becoming a Jesuit.  He initially resisted, but the call — “so strong inside of me” — could not be ignored.

Although the former parish priest had never ventured far from home, he was quickly thrust into the world.  After ministering to AIDS patients as a Jesuit novice, he was missioned to Mexico to learn Spanish and later spent six weeks providing  pastoral care to cancer patients in Venezuela.  Then, he was off to Paris for two years of study at Centre Sèvres, the Jesuit Institute for Philosophy and Theology.

Called home after one year in Paris, Fr. Biron was assigned to work at the Jesuits’ Centre for Justice and Faith in Montreal, eventually serving as director for three years.  Later, he was asked to serve as the province’s novice director, which surprised him because he considered himself to be the Jesuits’ “adopted child.”  “Who am I to impart the culture and tradition of the Society when I came from the outside?”

The Society clearly wasn’t concerned about Fr. Biron’s newcomer status because he served as novice director for 10 years while also working, once again, as the director of the Centre for Justice and Faith.  A well-deserved sabbatical followed, but even that was cut short by another pressing matter — his election, in 2008, as a delegate to the Jesuits’ 35th General Congregation, one of the Society’s most historic and important gatherings.  “God is very generous,” Fr. Biron says. 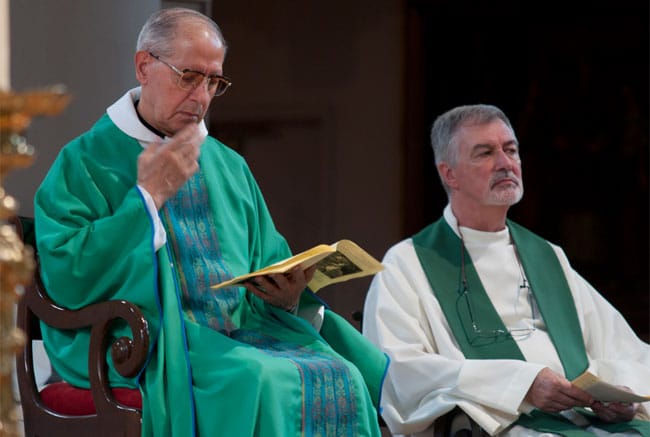 His Jesuit life came full circle in 2008 when he was assigned to serve as director of the Manresa Centre, the retreat house where he had experienced his conversion.  Two years later when he learned that he was being considered for the job of provincial of the French Canada Province, Fr. Biron wrote a letter citing 15 reasons why he was the wrong man for the job.  Age 66 at the time, he thought he was too old to be the province’s top man.  Despite his please-don’t-pick-me letter, it was no surprise when the “adopted child” was made provincial.

Today, his demanding schedule includes frequent visits to Haiti, which has been part of the French Canada Province for more than half a century. There are 60 Jesuits in Haiti and many vibrant ministries, including a Jesuit parish, novitiate, spiritual center, social justice center and schools.  He loves the Haitian people and the Jesuits there: “They are so alive and young.” Despite the poverty, he is consoled by the courage, hope and resilience. 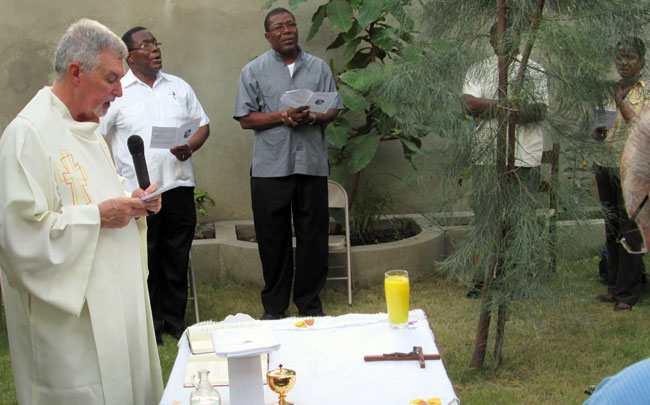 Fr. Biron has been a priest now for nearly 50 years and a Jesuit for 25.  He’s ministered close to home and cared for souls in far-flung places around the world.  “When I look back on my past, I feel that I’ve always been the same, and there’s no gap in my life.  I might not have been a Jesuit the whole time, but I always wanted to work at the border, living with the poor and in foreign countries.  That was one of my motivations to say yes to the call.”

And even today at 72, he has childlike excitement for his work, particularly spiritual direction and the gift of helping people discover the many ways in which God is working in their lives, a gift that has helped renew his own spiritual life.  He says, “For me it’s a very sacred time when I am directing people.”