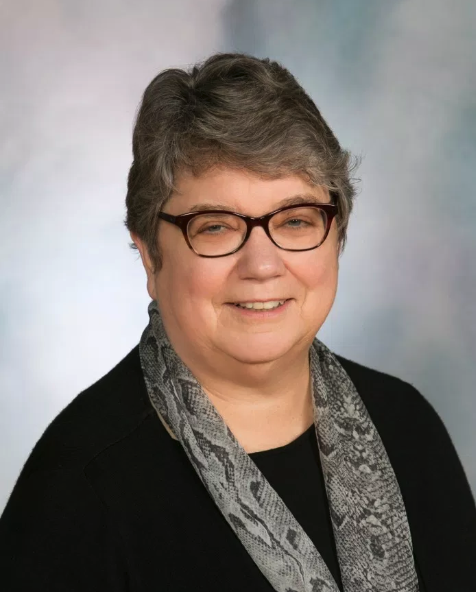 February 10, 2020 — “Theology is never practiced in a vacuum, but always in a specific time and place. This time and place is the modern world.” Passionate about ecumenism and the question of the Church’s place in the world, Susan K. Wood, SCL, Ph. D., became the first female Academic Dean of Regis College on August 15. She brings with her over 31 years of experience in university teaching and administration, as well as her specialization in theology and ecumenism. Dr. Wood agreed to talk with us briefly about her career path, her projects and her vision of the Church.

Towards cooperation and ecumenism

Dr. Wood is far from new to the world of the Jesuits. After receiving her doctorate in Religious Studies from Marquette University in Milwaukee, she was both a Professor of Theology and the Associate Dean at the School of Theology, Saint John’s University, in Collegeville Minnesota, before returning to Marquette. It was within this Jesuit institution that she accumulated 14 years of experience not only as a Professor, but also as the Chair of the Department of Theology which, she explained, “was a very large department, double the size of Regis College!” It is therefore with a great familiarity with both the Jesuit world and university education that she starts her new job at the Jesuit School of theology in Canada, affiliated with the University of Toronto.

Obviously I was very honoured to take up this position and delighted to work with my Jesuit brothers. I was hired for my experience and my work in Jesuit institutions.  I am part of a wider context of cooperation between men and women, Jesuits and non-Jesuits.

As well as her experience as a Professor and an administrator, Dr. Wood also brings her specialization in ecumenism. Indeed, she actively engages in official national and international dialogues with Lutherans, Baptists and Orthodox Christians.

I am very much involved in working towards the unity of the Church, and it’s also a very Jesuit thing to want to build bridges through dialogue. It’s something unique that I bring to Regis College. I also planning to teach a course next year on ecumenism. The Toronto School of Theology is itself ecumenical, given the number of Christian denominations represented within it.

Women and the Church

Even though Dr. Wood was hired for her vast experience, the fact remains that her hiring as the first female Academic Dean in 2019 represents yet another step in the Church’s more open attitude towards women. For example, recently, Pope Francis appointed 22 new members to the Congregation for Institutes of Consecrated Life and Societies of Apostolic Life including six sisters and one laywoman. According to Dr. Wood, this “shows that there is a place for women in Church structures where ordination is not required.”

It is important for women to be involved in the Church, for sometimes they have different experiences which can enrich the places where we work. For example, sisters often experience community life and the Church differently. In addition to the Pope’s appointments, other roles are possible within Vatican structures. Since Vatican II many women have worked in parishes and dioceses.

Regis College: Looking Towards the Future

The position of Academic Dean has many responsibilities. As the principal Academic Officer, Dr. Wood manages academic programs, course schedules, and the entire academic component of the college, in addition to supervising the library and the registrar’s office. She must coordinate the implementation of rules and procedures and ensure the hiring of professors. Which is her priority out of all of these tasks? First, to get to know her colleagues and understand their needs. Then, she already has several goals in mind, including promoting the new con-joint certificate programs recently approved by the Toronto School of Theology and the University of Toronto.

I need to promote them within religious communities. Religious men and women are part of the Church. Even if they don’t work in theology, they must have a practical knowledge of it—some theological literacy, even if they are not ordained.

This idea meets another one of Dr. Wood’s goals, namely increasing enrollment at Regis College.

We would like Jesuits to know that our programs are based on Ignatian principles. The programs here are very in tune with their values. However, since the Church is part of the world and Toronto is a major cosmopolitan city, we would also like to reach out to professionals in the region through short, non-credited modules such as our “Windows on Theology” program or even through a series of conferences.

Even if she will only be teaching one course per year due to her administrative duties, Dr. Wood wishes to be close to the students: “Regis College is a relatively small school affiliated with a larger university. I really hope to eventually know most of the students.”

Between Jesus, books and LGBTQ advocacy: Fr. James Martin, SJ
Prolific writer and speaker, America Media’s editor-at-large, consultant for the Vatican’s Dicastery for Communication: American Jesuit Fr. James Martin is one of the most well-known Jesuits after Pope Francis.
News
PRESS RELEASE : Fr Leon Lajoie, SJ, and Kahnawà:ke
In recent months, the Catholic Church in Canada has been reeling from the news regarding the discovery of undocumented Residential School grave sites in Western Canada. It is under these tragic circumstances that we were distressed to learn of reports of abuse by Fr. Léon Lajoie, S.J. while he served as a parish priest in Kahnawá:ke.
News, News Story
Bryan Manning, SJ, Professed His First Vows
Bryan Manning, SJ, professed first vows of poverty, chastity and obedience last August 15, 2021 at the Villa Saint Martin in Montreal.
News, News Story