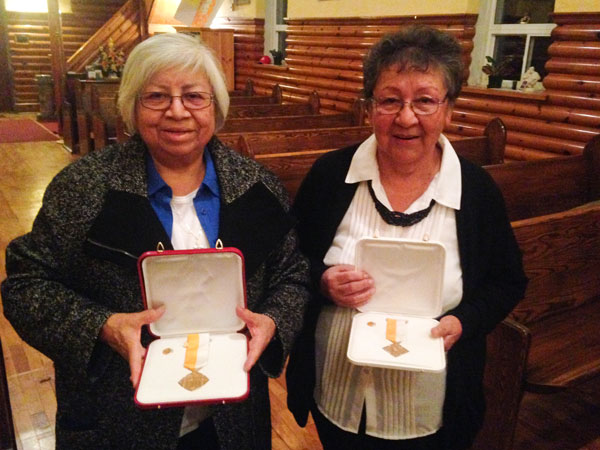 December 14, 2015 — His Grace Bishop Jean-Louis Plouffe of Sault Ste. Marie, Ontario bestowed honours upon some of the Jesuit collaborators in the Aboriginal Apostolate from October 13-15.

In gratitude for their service to the Church and the Diocese, the Bishop conferred honours, both Papal and diocesan, on hundreds of people from throughout the diocese, for their service. Six of the individuals honoured are long-serving co-labourers of the Jesuit Province’s apostolic work.

The papal medal Pro Ecclesia et Pontifice was bestowed on Rosella Kinoshameg. Also known as the "Cross of Honour Medal," this is conferred by Pope Francis for distinguished service to the Church. Rosella is very well-known by many in the Jesuits in English Canada Province, having co-laboured in the Aboriginal Apostolate for almost 40 years.

In remarks given as she received the Papal honour, Rosella was hailed as a true bridge-builder between the aboriginal and non-native people. Rosella was also mandated as a DOS, (Diocesan Order of Service), in 2000. Her service extends beyond the Anishinabe sector of the diocese to the national level, where she served as a founding member of the Catholic Aboriginal Council of the Canadian Catholic Conference of Bishops, for 15 years.

In 1996, Rosella was given an Honorary Doctorate in Sacred Letters from Regis College, at the University of Toronto, conferred by then Chancellor, Fr. David Nazar, SJ.

The "Pontifical Award of Merit," Benemerenti, was given to Jean McGregor-Andrews, and conferred by Pope Francis for outstanding contribution to the life of the Catholic Church.

Jean is a woman proud of her aboriginal heritage and her Catholic faith; an advocate for the respect of cultures and spiritualities. She is a tireless servant of others, and a loyal supporter of her husband Lawrence, in his music ministry in this diocese and beyond.

Two of the first women to be mandated as DOS, (Diocesan Order of Service), were honoured by Bishop Plouffe with the Ordo S. Mariae Ormensis, "The medal of the Diocesan Order of Merit," at the celebration in Sudbury. Rose Peltier is a respected elder in Wikwemikong and Margaret Toulouse continues to serve in Sagamok.

At the Sault Ste. Marie celebration, Bishop Plouffe honoured Deacon Peter Johnston and Mrs. Millie Johnston with the Ordo S. Mariae Ormensis. The Johnstons have been the pastoral administrators of Our Lady of the Highway Parish, Serpent River, for over four decades.

The occasions for these commendations were three Masses of Thanksgiving that Bishop Plouffe celebrated, in Sault Ste. Marie, Sudbury and North Bay, as he prepares for retirement.

Bishop Plouffe celebrated one more Mass of Thanksgiving for the Anishinabe people of the Diocese of Sault Ste. Marie, in the Beedahbun Chapel of the Anishinabe Spiritual Centre, on October 28.