Father Charlie Sitter died peacefully on May 9 at René Goupil House in Pickering, ON.   One of the young Jesuits was sitting at his bedside and noticed his breathing slowing down a lot.  He held his hand and said, “You can let go now, you can go to God.”  Then he started chanting very softly, Ubi caritas et amor, Deus ibi est. And Charlie took his last breath. Charlie was in his 94th years and was a Jesuit for 75 years.  Charlie, the son of Sebastian Sitter and Caroline Schreier, was born on 7 December 1926 in Winnipeg, Manitoba.

After three years at St. Paul’s College, Charlie entered the novitiate at Guelph on 1 February 1945.  He took his first vows in 1947, and he did juniorate studies for the next two years.  In 1949 Charlie studied philosophy at the Jesuit seminary at 403 Wellington Street in Toronto.  He began a three-year regency at Campion High School, in Regina Saskatchewan in 1952.  After regency, Charlie moved back to Toronto for theology studies at 403 Wellington Street in Toronto and was ordained a priest there on 22 June 1958 by James Cardinal MacGuigan.  Tertianship was at St. Stanislaus Novitiate in Cleveland, Ohio.

Charlie’s principal ministry took place in high schools and colleges.  In 1960 he returned to Campion in Regina as chaplain to students and professor of religion and history.  He was also moderator of the Drama Society.  In 1967 he went to Immaculate Conception Parish in Vancouver as an associate pastor.  In 1968 Charlie journeyed to his native city in Winnipeg to become the chaplain at St. Paul’s College on the campus of the University of Manitoba. He had a passion for books and art and thus, for the rest of his life, he would serve his various communities as house librarian and artistic decorator.  In Winnipeg, he served for a few years on the Archdiocesan Committee on the Liturgy and as Director of the Student Centre at the College.

He left Winnipeg in 1971 and was assigned as chaplain at McMaster University in Hamilton.  A year later he moved to Pickering to join a team of five in the Spiritual Exercises ministry at Manresa Retreat House.  With his experience at Manresa, Charlie returned to Winnipeg in 1976 and for the next thirteen years conducted retreats – private and communal – in various places in the Province of Manitoba and beyond.  During his last two years at St. Paul’s College in Winnipeg, he was the minister of the community, and of course the house librarian. His farewell to the West took place in 1990 when he came to Toronto to serve as chaplain to St. Bernard’s Convent and Retirement Home.

In 1991 he returned to the retreat apostolate at Manresa in Pickering and resided in the newly built residence for the Pickering Jesuits – La Storta. There he advised the superior on furnishings for the residence and cared for the chapel.  But his special assignment was to set up a house library in the large empty basement.    As many Jesuit communities began to downsize, La Storta was the recipient of a flood of good spiritual and theological books.  Over the years, this librarian par excellence sorted out the books: all were systematically organized, and shelves were made and accurately and diversely labelled.  Retreatants and guests continue to marvel at the basement library, not only for its huge collection of good books, but also for the objets d’art scattered throughout the library.  Even when he moved out of La Storta to René Goupil House to benefit from more medical attention, Charlie continued on as the La Storta librarian.  It was truly edifying to see him laboriously journey with his walker to the La Storta basement, even in foul weather.  Charlie could be very kind, and so often his trip across the driveway was to fetch a book he thought would really interest another René Goupil resident.  It was only in the last few months of his life that he relinquished his favourite role of being the librarian.

Charlie was a very educated man, who loved to read broadly, and he had a keen interest especially in religious questions.  He was a steady worker, whether in the West, or in the East, at Pickering, in the Province Archives in Toronto, or as chaplain at Loretto Abbey.  He was much appreciated by the many groups of religious sisters who annually attended Fr. Mike Lapierre’s summer Institutes at Manresa, to whom he taught Liturgy.

Because Charlie was extremely sensitive in nature and because he was such a perfectionist, he suffered a lot of interior pain and hurt. This, combined with his very sensitive stomach and with his digestion issues, could sometimes result in outbursts of temper.  This often caused hard feelings and even fear in others. And it led to a lot of loneliness in Charlie himself.  But Charlie was quite interested in guests who came to Pickering.  A long and lively conversation was the inevitable outcome.

He enjoyed humour and this was proven by his laugh which would resound throughout the house.  His excellent clear and loud voice meant he was often the lector at liturgies in the Infirmary. At the Easter Vigil, just a month before he died, Charles proclaimed the Exodus story in such a clear and dramatic way, that all who heard it could see the waters being divided right before their eyes 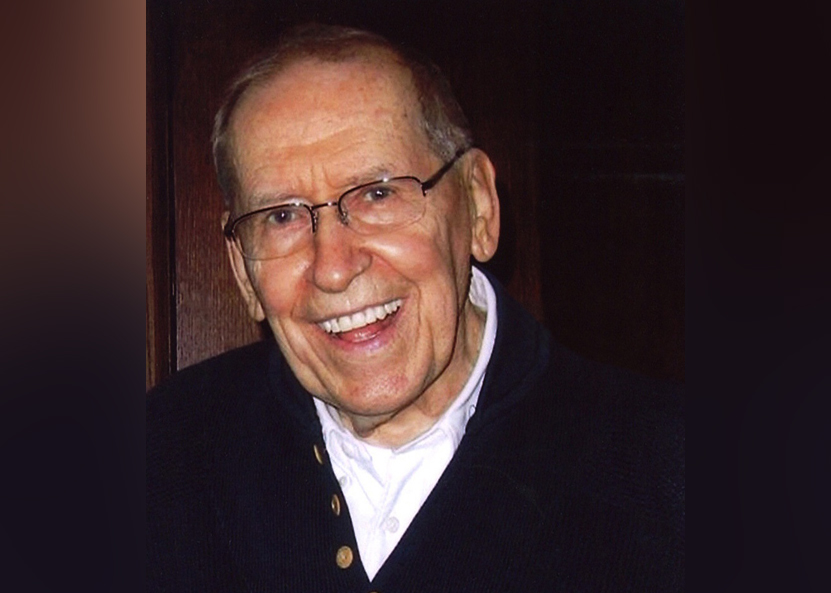