Bishop Attila Mikloshazy was born in Hungary in 1931, and entered the Society of Jesus there in 1949. He left Hungary during the revolution of 1956. He studied philosophy and theology in Budapest, Munich, and Toronto (at Regis College), and was ordained a priest in Toronto in 1961. He obtained the Doctor of Sacred Theology degree from the Gregorian University in Rome in 1968, with his dissertation “East Syrian Eucharistic Pneumatology.”

From 1963-1964, he taught theology at Loyola College in Montreal. He began his many years of service at the Toronto School of Theology in 1968, where he was the only professor to have served on all three Roman Catholic faculties: from 1968 to 1974, he taught at Regis College; from 1974 to 1984, in the Faculty of Theology of the University of Saint Michael’s College; and from 1984 to 1998, at Saint Augustine’s Seminary. He was dean of the faculty of theology at Saint Augustine’s for 13 years. Many of his students remember his detailed scholarly classroom notes and bibliographies, always kept meticulously up to date, and his passion for his many theological subjects.

In 1989, he was appointed titular bishop of Castelminore for the spiritual assistance of Hungarian emigrants throughout the world. After his retirement as professor emeritus of systematic theology and liturgy, he continued his episcopal duties, visiting various Hungarian communities throughout the world. He continued this ministry until his resignation from the episcopal office was accepted by the Holy Father on April 5, 2006.

His retirement years proved to be very fruitful for his continuing ministry in the intellectual apostolate. In 2001, he published Benedicamus Domino! Let us Bless the Lord! (The Theological Foundations of the Liturgical Renewal). In 2006, with the help of the Hungarian Franciscan Friars in Detroit, he published (in Hungarian) A Brief History of the Hungarian Roman Catholic Emigrant Communities Overseas. Also in 2006, he published a five-volume History of Liturgy, on the origin and development of the Christian liturgy according to cultural epochs within their political, cultural and ecclesial contexts.

In 1999, the faculty of theology of the University of Saint Michael’s College honored Bishop Mikloshazy with the Doctor of Divinity, honoris causa. He continued to live at Saint Augustine’s Seminary after his retirement from teaching, until March 2011 when, due to a mild stroke, he moved to the Jesuit infirmary in Pickering, where he accepted his new mission, orare pro Ecclesia et Societate, with his typical zeal. He spent much of his time in Pickering translating Jesuit texts and the talks of the Holy Father into Hungarian, until the day before he died. A book of translations of the Pope’s writings in Hungarian is slated for publication soon.

Throughout his life, he maintained a profound devotion to the Sacred Heart and a deep love for the Eucharist. 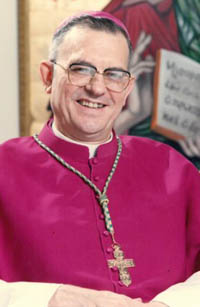