Norm Dodge died peacefully in the Lord, surrounded by fellow Jesuits, on 2 May at Rene Goupil House, Pickering. He was 92 years old and was a Jesuit for 67 years. Norm, the son of Charles Frederick Dodge and Veronica Theresa McDonald, was born on 6 April, 1928, in Saint John, New Brunswick. After seven years of studies at Loyola High School and College, Montreal, he entered the Society of Jesus at Guelph on 7 September, 1953. Following first vows in 1955 he did a year of juniorate and then began philosophy at Immaculée-Conception, Montreal. He spent a year of regency at Regiopolis High School, Kingston, and two years at Campion High School, Regina,

In 1961 Norm studied theology at Regis College, Willowdale, and was ordained on 14 June, 1964. After discerning his future ministry, he began a program of social studies in Ottawa starting in 1967. Then two years later he began a long tenure of nine years with the Federation of Catholic Charities in Montreal, putting to good use his solid training. In 1978, as a full-fledged social worker, he specialized in pastoral ministry to seniors and shut-ins. This involved working with lay ministers and volunteers, liaising with local parishes, endless meetings with various community and ecclesial groups, and counselling the families and friends of his clients.

In a dramatic shift in his life after the death of his 100+year old mother, in 1990 he volunteered for the Jesuit Mission in Jamaica. He was pastor of St. Theresa Church in West Kingston and for three years he ministered in this large parish.

Norm decided three years was ample time for him to minister in the Caribbean and so in 1993 he was assigned to the Jesuit community in Ottawa and there he resumed his pastoral care ministry to seniors. During his early years he was superior of the Jesuit community, principally composed, along with Canadians, of Jesuits from Africa and the Near East, who were enrolled at the various universities in the city. As superior, he exhibited a truly Ignatian generosity of spirit which made for a pleasant community environment. He also served the Upper Canada Province as a province consultor from 1997 to 2003. Norm continued in this demanding ministry until 2015 when he realized his energy and cognitive levels were diminishing with age. After letting go of this responsibility he put on the mantle of spiritual director to diocesan priests, religious women and laity. In May of 2016 he moved to the Jesuit infirmary in Pickering, Ontario.

Fr. Dodge was well suited to pastoral care ministry, as he was of a cheerful disposition, quite patient and a good listener. Norm believed in spending quality time with each person he visited. He refused to just dispense Holy Communion and rush away. He trained his volunteers to visit the way he visited. His teams visited shut-ins in many parishes. He also provided pastoral services to various seniors’ residences and hospitals and served as an ad hoc chaplain to the Sisters of St. Anne in Montreal and Ottawa. Of a relaxed and even temperament, Norm fitted well into any community. His radiating smile brought peace and joy to many and this continued even after he retired. He settled into René Goupil House admirably, and he took full part in all the events of the community. He enjoyed regular visits to La Storta House to peruse the library, and to take part weekly in a Sunday meal

Norm Dodge was inducted into the Hall of Merit at Loyola High School in Montreal. He was given this honour at the first Inaugural Hall of Merit Dinner on May 30, 1986. Norm was inducted in the same ceremony as Bernard Lonergan, John Hodgins, His Excellency Major General George P. Vanier, and his son Jean Vanier (L’Arche). In the tribute made of him on the occasion of his induction, we read, “Father Norm Dodge enjoys talking about his work with the elderly and the handicapped, but he is embarrassed talking about himself.” But he did say that he was inspired while still a student by Fr. Tom Moylan, SJ to take an interest in people, and he said that the simplicity and dedicated concern for the poor lived by Tony Walsh of Benedict Labre House also had a strong influence on him.

Norm never boasted about his athletic prowess in hockey and baseball, but to enter the Society of Jesus, Norm had to leave behind what might have been a promising career in professional hockey. He did play, though, for the Montreal Junior Canadiens around the time of Jean Beliveau, and always remained a Montreal Canadiens fan.

In the last months of his life Norm went into a speedy decline in memory and mobility. As it did to other residents at René Goupil House, the Covid-19 virus took its brutal toll on this gentle beloved Jesuit, and he went quickly. 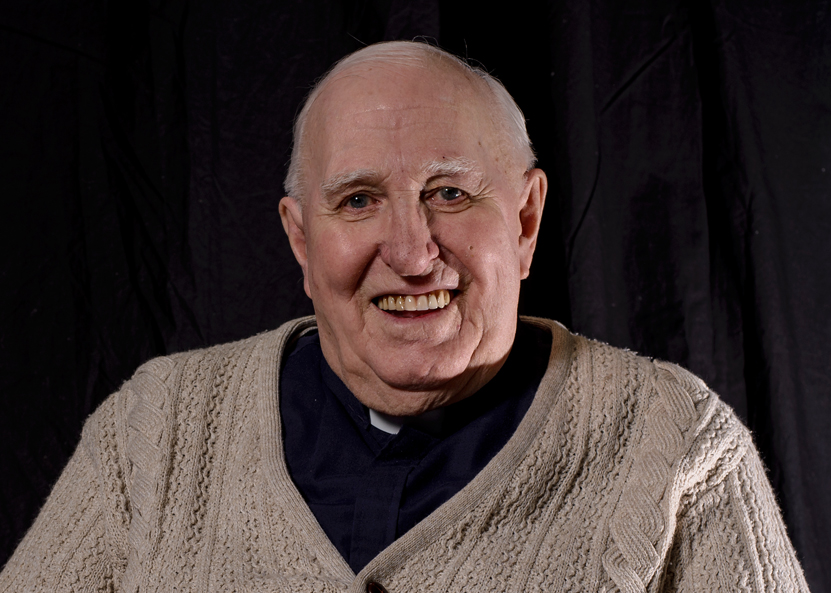