Father Fernand Bédard died on April 2, 2020, in the Richelieu infirmary. He was in relatively good health, even after undergoing hip surgery a few months ago. But he had lost his mobility and was only able to move around in a wheelchair. For the past week, he had been less and less present to what was going on around him. He died peacefully in the early afternoon.

Fernand was born on February 24, 1925, in Quebec City (in the Limoilou district). He did his secondary studies at the Séminaire de Québec (5 years) and at Collège Garnier (one year) before entering the novitiate of the Society at Sault-au-Récollet on September 14, 1942. After his first vows, he followed the regular formation of many scholastics of his time (two years of Humanities, one year of Sciences and three years of Philosophy). During his regency, he taught for two years at Collège Saint-Ignace and one year at Collège Sainte-Marie in Montreal. He studied theology at Collège de l’Immaculée-Conception and was ordained a priest on May 20, 1956, in Quebec City by Bishop Lionel Audet, auxiliary to the Archbishop of Quebec. After spending his tertianship in Mont-Laurier in 1957-58, he began a teaching career at the Collège de Québec, which he continued until 1975. He then devoted himself to the Spiritual Exercises apostolate. He worked at the Centre de spiritualité Manrèse from 1975 to 1982; then he continued to accompany retreats “on the road”, especially with communities of religious sisters, until the closing of the residence adjacent to Collège Garnier in 2006. He then joined the companions who migrated to the Château de Bordeaux, a residence for retired persons where lay people and religious men and women share common spaces. He remained there until his health condition forced him to come and live at the Richelieu infirmary in 2017 to receive care.

Fr. Bédard lived in Quebec City for nearly 60 years (from 1958 to 2017). It was in the city where he was born that he exercised his apostolic ministry and was twice community superior: at Résidence Notre-Dame on Rue Dauphine from 1989 to 1992 and at Résidence Garnier from 1992 to 1999. He lived at this latter location for 40 years.

He is survived by two brothers (Pierre and Yvon), two sisters (Louisette and Monique) a sister-in-law (Janette) and nephews and nieces. Due to the coronavirus epidemic, it is not possible, at this time, to determine when the funeral will be held. 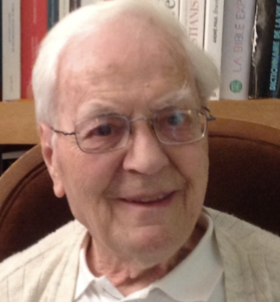