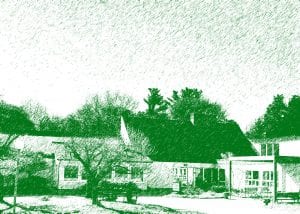 Dear Friends of the Jesuits:

Greetings and abundant blessings, especially during this challenging time of pandemic. I am certain that many of you know of the outbreak of COVID-19 last Spring at René Goupil House, the Jesuit infirmary in Pickering, Ontario. During a period of two weeks in late April, seven good and devout Jesuits were called home to God. To say the least, this has been a heartbreaking time for the Jesuits of Canada and for the friends and family of our deceased members. RIP good and faithful brothers.

René Goupil House was originally built as a retirement home, eventually becoming an infirmary. Due to this fact as well as more stringent regulations from the health authorities, the current facilities at René Goupil are in need of a significant upgrade in order to make the building compliant, safe and secure for the over 20 Jesuits who live there.

“Why have a special infirmary for Jesuits, given the cost and headaches, when there are many other longterm care facilities available?” Our elderly Jesuits arrive at René Goupil after many years of serving the people of God in various ministries. Many of you doubtless have been inspired by one or more of the Jesuits who are or who have spent their last days in Pickering. And so, the answer to above question is that the Jesuits of Canada have already experimented with public long-term care homes without success. A few decades ago, for example, some men were sent to a facility in St. Catharines, Ontario where despite receiving good care, they felt isolated from their brother Jesuits and from the people they had come to know during their ministries. The reality is that when a man becomes a Jesuit, he leaves behind his family and, in essence, the Society of Jesus becomes the closest thing to family that he knows. In principle, Jesuits live in an active community as long as they are able personally to take care of themselves. The beauty of this is that you often have Jesuits in their 30s living with men in their 70s and 80s. Thus, when the man becomes infirm or loses his autonomy, the transition to a house of brother Jesuits is much more wholesome than moving to a home where he may be the only Jesuit. In a very rich way, René Goupil enables Jesuits to continue to fully participate in Mass daily, and remain part of the vowed, religious life to which they have pledged their own lives. In fact, they are missioned to pray specifically for the work of the Society worldwide. The Jesuits of Canada have made the commitment that their aged and infirm brothers will be able to continue to live in a Jesuit community.

The required renovations at René Goupil House will be costly due to the regulatory requirements that are far more onerous today than they were pre-COVID. At present the renovation budget is close to 1 million dollars.

With this letter, I am asking you to consider supporting the Jesuits at René Goupil, who have supported the faithful of God their whole lives, by contributing to this special appeal to renovate and renew our infirmary. Having a safe and secure home to live out their final days, where their ministry is to pray for us all, would be the best Christmas present any elderly Jesuit could pray for.

May God bless you for your generosity,
Erik Oland, SJ
Provincial