As explained in the Synod on Synodality’s Vademecum, “the synod is really all about dialogue and listening to individuals within the Church, and that includes those that are on the margins and those that have that would not identify as being part of the Church, those that are quite excluded”, said Kevin Kelly, SJ, the Executive Director of the Ignatian Spirituality Centre of Montreal.

This summer, following the call for consultations from the first stage of the Synod on Synodality, which focused on local churches, the Ignatian Spirituality Centre in Montreal hosted a group of LGBTQ+ persons, their families and allies, for a series of spiritual conversations about their experience, their desires and hopes in the Catholic Church.

These were important conversations : in the synod synthesis reports from across Canada, LGBTQ+ inclusion and accompaniment has been a consistent theme. The synodal process is now continuing with a continental phase.

« It was coming out of this idea of dialogue, spiritual conversations, hearing voices both within the Church, on the margins and outside of the Church. »

How were you linked to the synodal process?

When Dina was working with different parish groups and while she was training individuals within the diocese, an issue came up: should we have specialized spiritual conversations for groups that may feel or are marginalized?

So, you had spiritual conversation with young adults, with men and women who are separated or divorced within the Church, but also with LGBTQ+ people. How did it go with this latter group?

It was coming out of this idea of dialogue, spiritual conversations, hearing voices both within the Church, on the margins and outside of the Church. We brought together, from our network, around 25 people who either identify as LGBTQ+ in the 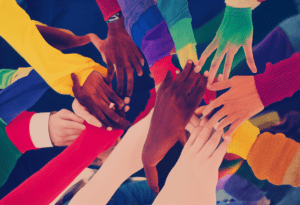 We met twice and, without revealing who was participating in this gathering, the summary of what was discussed was given to the archdiocese.

The goal was to encourage people to share their experiences and what their desires are for the Church, how they felt, and how they have been included or excluded at times. It was really a chance to give voice to individuals that don’t always get a chance to speak out because they feel excluded, or disconnected, or they have left the Church. Often, when any kind of activity between the church and LGBTQ+ happens, it is ideologically and politically charged; it is rarely a dialogue and more about differences and frustrations on both sides. This is not the vision of Pope Francis of creating spaces of encounter in order to just listen to and hear the other’s perspectives!

In these meetings, we were not discussing Church’s teachings, nor was it a debate. It was really a chance for dialogue and to hear where people are at this point. It is always important in an Ignatian context to listen, not just to the facts of the story, but the emotions as well. There was so much pain for some people. While they didn’t share their entire story, there were many insights into their struggles.

What were the fruits of these dialogues?

First of all, I think people were grateful, just to be able to connect and to share their stories and perspectives. In this idea of encountering the other, the simple experience of being listened to and listening to others, even if their perspectives are different, changes us, it opens us up, it helps us to see other points of view. Just being heard and being listened to, was an incredible experience for all participants. This alone shows the humanity of this process. A lot of vulnerabilities, a lot of very painful experiences were shared. Having this opportunity to speak and to share them was the first step in helping people to experience a sense of knowing that others can relate to them, and to encourage further engagement.

The group believes that there is a real need for members of this community who want to be connected within the Church to have a space to start to explore. The second meeting built on this. We talked about how the Church in Montreal might be open to support individuals in the LGBTQ+ community to find a place of belonging. Many ideas were shared.

Just being heard and being listened to, was an incredible experience for all participants.

It’s an ongoing project. The group really is desiring this to continue. We will see what the next months brings.

What is your hope?

The ISCMs hope is to bring the Spiritual Exercises and spiritual accompaniment to anybody who is seeking them, whether they are a young adult, a divorced or separated person, an LGBTQ+ person. St. Ignatius always encouraged us to meet the person where they are. That’s a really important aspect of what we’re doing at the ISCM. We feel very comfortable going into an area that could be a bit controversial not to enact theological or ideological change, but rather just to meet people where they are and to hear their stories.

Lean more about the Ignatian Spirituality Centre of Montreal