English - Français
History today: The Virgin of Loreto, a devotion that crosses oceans

December 13, 2019 – It was in the sanctuary of Loreto, Italy that, last March, Pope Francis dedicated all vocations to the Virgin Mary and signed the apostolic exhortation in response to the Synod on Young People, the Faith and Vocational Discernment. More recently, the Pope has decreed that the optional memorial of the Blessed Virgin Mary of Loreto should be inscribed in the Roman Calendar on 10 December and celebrated each year, as thousands of pilgrims already do.

Loreto is famous for housing the Santa Casa, the house in which the Blessed Virgin Mary is believed by some Catholics to have received the Annunciation of the Archangel Gabriel. A legend claims that this house, which reminds us of the mystery of the Incarnation, would later be transported by angels from Nazareth to Croatia, and then to this Italian town, before a facsimile of the sanctuary was built in New France during the seventeenth century.

The latter was due to a vow taken by Father Chaumonot, S.J., who, after having been miraculously healed at the sanctuary of Loreto during his younger days as a vagrant, took his life back into his hands and ended up discerning his vocation to become a Jesuit. He would maintain a strong connection with the sanctuary, which he wanted to bring over with him to the other side of the Atlantic. Through his story we can see that reaching out to young people, however marginalized, and accompanying them can change lives.

From Vagrant to Jesuit : Joseph-Marie Chaumonot

Pierre-Joseph-Marie Chaumonot (1611-1693) left behind not only an abundant correspondence, but also an autobiography he wrote in 1688 at the behest of his Superior, Claude Dablon. We therefore have a good idea of what this Jesuit missionary’s life was like from his childhood to his old age.

Born in France, he wandered far and wide in Europe after he committed a petty theft in his youth and was too ashamed to return home. He thus walked the roads of France as far as Italy. One day, miserable and suffering from scabies, he arrived at Loreto, which would prove a decisive moment in his life.

After everything, I mustered my courage on my approach to the Holy House of Loreto. “Perhaps the Blessed Virgin, who performs so many miracles in this holy place for the poor and wretched, will take pity on my misery” […]

As I left the holy house of Mary, a stranger, who appeared as a young man but who might well have been an angle, said to me, with an air and tone full of compassion, “My dear child, look how much pain your head causes you ! Come, follow me, I will try and remedy you.” I followed him. He led me out of the church, behind a large pillar where no one could pass by. Once in this hidden place, he sat me down and told me to take off my hat. I obeyed, and he cut my hair with scissors, rubbed my sore head with a white cloth and, without causing me any pain, removed the scabs, the puss and fleas before putting my hat back on. —Chaumonot, Autobiographie

from the Archive of the Jesuits in Canada From that moment on, Chaumonot changed his life. He went from being a vagrant to the valet for a “venerable old man.” Then, one thing led to another and he happened to meet with a Jesuit, who, after seeing that he understood Latin, suggested that he pursue his studies. After some hesitation, in 1631, at twenty-one years old, Chaumonot finally entered into his noviciate at Saint-André in Rome. But he never forgot about Loreto. Once ordained, for example, he chose to say his first Mass in Rome in the “chapel built in honour of the Virgin by Cardinal Palloti, named and modelled for the Holy House of Loreto.”

One day, while still in Rome, Father Chaumonot met Father Poncet, a French Jesuit, who showed him the Jesuit Relations of 1636, written by Father Jean de Brébeuf, then Superior of the Huron Mission in New France, who was asking for new missionaries. Interested, Chaumonot managed to obtain a special permission to leave Rome without having finished his studies. Before leaving Italy, he made a final pilgrimage to Loreto with Father Poncet that would leave a lasting mark on his work in North America.

Finally, we arrived at Loreto by way of St. Luke, and we performed our devotions with as much fervour as we could manage. We commended the success of our voyage to the Virgin and formulated a notion to build a chapel while we were in New France under the name of Notre Dame de Lorette and following the plans of the Holy House of the Mother of God that we were in.—Chaumonot, Autobiographie

Not long after this pilgrimage, Chaumonot returned to France with his companion before embarking aboard a ship bound for the French colony in 1639. He arrived at Québec on August 1st, and left two days later, still with Father Poncet, on a mission to the Wendats in the Great Lakes. He would spend the rest of his life as a missionary among the Indigenous peoples of North America, where he learned many of their languages. On the subject of Chaumonot, Allan Greer had written that “every time this traveller encountered a foreign culture, he immersed himself within in entirely and deeply, adapting to his new situation and learning to see it, to a certain degree, from the inside. It was language that gave him with a base for learning the different human environments that he passed through.” This was as much the case in Italy as in North America.

During his years as a missionary in New France, Father Chaumonot never forgot the vow that he had made at Loreto. To fulfil it, he thus made a number of international connections during the second half of the seventeenth century, including with the Italian sanctuary itself.

Also, since my departure from Europe, I have always maintained the desire to procure the Holy Virgin a house built on the model of the true House, transported from Nazareth to Dalmatia and Dalmatia to Italy here in Canada. I have therefore had the Huron make a large belt of porcelain, with white beads for a background and black ones forming letters bearing the holy words: Ave Maria Gratia Plena, etc. The Jesuit Father and confessor to whom we addressed it in France set it in a gilded frame with an inscription which indicated that the Huron nation, newly converted to the faith, offered this present to the Mother of God. My lords the canons and other officers of the Holy House of Loreto received it with many marks of their admiration and recognition, and I do not doubt that that Blessed Virgin received it even more fondly, because only a few years later, she provided me with the occasion and the means to build her a Loreto in the forests of New France, three leagues from Québec. — Chaumonot, Autobiographie

Thus, after several years of preparations and exchanges between New France and various communities in Europe, in 1674 Father Chaumonot succeeded in founding the mission of Notre-Dame-de-Lorette, not far from Québec. This mission, as the researcher Muriel Clair has pointed out, gathered together the Christian Wendat under Jesuit tutelage, reconciling two different spiritual and cultural universes in the same territory. The Jesuits saw this as an occasion to establish a new Christian community, whereas the Wendats, since their departure from Wendake in the Great Lakes and their subsequent settlement on Ile d’Orléans in 1651, wanted above all to survive as a cultural community.

In New France, Lorette took its name and its configuration from the sanctuary of Loreto, while also being adapted to the apostolic work of the Jesuits in North America. The mission was hence literally built around the chapel: the Wendat longhouses formed enclosed the chapel which contained the sanctuary. During its inauguration on November 4th, 1674, a missionary recalled the words of a Christian Wendat who knew the story of the chapel in Italy well:

Our Dogique Louis Taonde[choren] made a strong and spirited speech in which he recounted, among other things, what he had heard of Loretto in Italy. He said that it seemed to him that all the cabins that he saw laid out around the chapel represented the great temple that enclosed the Holy House of Loreto, and that they should considered the entire village as a large church, with each cabin constituting its different parts. […] - De la mission Huronne de nostre Dame de foy appellée apresent de Laurette. 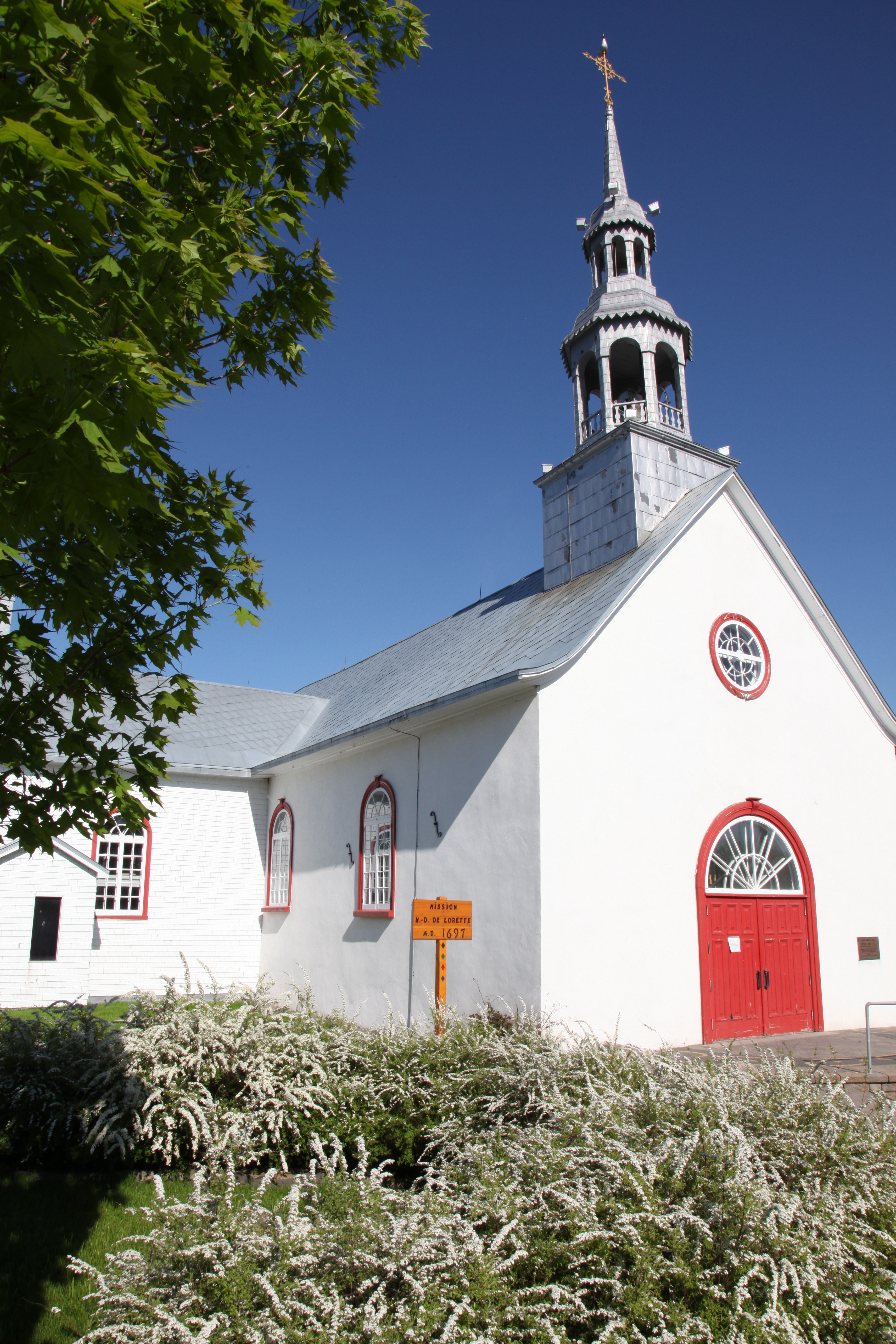 The account of Lorette’s foundation indicates that several bowls, relics, statues and images, including one of the Virgin modelled on the one at Loreto and an earthenware bowl made in the form of the Santa Casa, were place inside the new chapel. Many of these objects were gifts from religious communities not only in New France, but from across Europe. For many years the chapel at Notre-Dame-de-Lorette attracted pilgrims from across the world. Later on, the mission was renamed Ancienne Lorette in 1697, after the Wendat moved a little bit further away to a new settlement at Jeune Lorette.

Thus, hundreds of years before Pope Francis’ visit to Loreto in Italy, this sanctuary had already inspired the young Chaumonot, renewing his faith and participating in his vocational discernment.

Recent News
Demetrius Michailides
Father Demetrius MICHAILIDÈS died at the Richelieu infirmary on the evening of June 25. He had joined the Jesuit community at the Richelieu residence in July 2016. He taught dogmatic theology at the Université Saint-Joseph in Beirut, as well as in Belgium and New York.
Finding God in a pandemic: Testimonies from Jesuits and colleagues
June 26, 2020 — In Canada, COVID-19 has had an impact on all aspects of our lives since March and we have already shared the changes it has brought to our work. However, as Frantz Georges S.J. reminds us, “the spiritual experience is fundamental in the lives of all Christians.”
Holy Cross Church in Wiikwemkoong vandalized, forced to close temporarily
June 22, 2020 – The Holy Cross Church in Wiikwemkoong, Ontario, founded and still run by Jesuits, was vandalized between Saturday, June 13 and the early hours of Sunday, June 14.
Multidimensional development: Empowering Haiti’s rural communities
June 19, 2020 — The Support Group for Rural Development (GADRU) is a nonprofit organization founded by Fr. Jean-Marie Louis, SJ, not only to oversee and promote the rights of those living in rural communities but also to participate in the construction of an inclusive, fair, and democratic society.
Brave enough to try: Marc-André Veselovsky, SJ, and Jesuit formation
June 17, 2020 — Marc-André Veselovsky is not only a Jesuit, but also a vegetarian, semi-professional singer, a lover of board games (some might say the more complicated ones…) and a good listener.
Journeying with youth at Cowork Magis: A space for start-ups in Paris
June 15, 2020 — Fr. Grégoire Le Bel, SJ, set up a coworking space in collaboration with a group of young people, first taking one office, then another, and finally an entire space designed according to the needs of these entrepreneurs.
Being open to the world: A reflection by the late Fr. Bill Bourke
June 15, 2020 — While Jesuits and colleagues are often called to integrate into environments different from their own, Fr Bourke's openness to other cultures can be a model to follow.
view all news