English - Français
Solidarity with Refugees in Sudbury
by Norbert Piché

From January 28th to the 30th, I participated in a week of solidarity with refugees in Sudbury. Father David Shulist, SJ, Director of Spiritual Services at the University St. Ignatius Parish, had invited me to be a part of this week and help raise awareness about refugees and their experiences. I gladly accepted.

We kicked off the week with a showing of “Human Flow”, a documentary film produced by Ai Weiwei. It is a powerful film with few words but with striking images that depict the refugees’ plight and their humanity. One cannot remain indifferent after seeing such a film.

The next evening, I was part of a panel of 4 people who were invited to share their knowledge and experience regarding refugees. The title of the Round Table was “Canadians, Refugees & Migrants Now: The Challenge of Sharing the Journey”.

The first speaker was Tara Hurford from Development & Peace who gave us some startling numbers regarding forced displacement and challenged us to follow the Catholic principle of “See – Judge – Act” in order to get to the root causes of this forced displacement.

Anas Karzaï, a sociology professor from Laurentian University who is personally and professionally committed to the cause of forced migration, followed up with a brilliant analysis of the root causes of forced displacement. In 20 minutes, he managed to explain how Western countries, led by the United States, have divided the world into an “us” vs. “them” mentality since 9/11. If our way is good and theirs isn’t, we tend to impose ours which justifies military intervention and continues to feed our military economy. And all of this to maintain our world dominance by continuing to extract resources from the Global South.

I then spoke on how fear drives us to reject the stranger, the refugee. We therefore need to cultivate compassion, love and empathy to overcome this fear. But we can only do it by befriending the other, by walking by his side.

Finally, Sara Torres, a social work professor from Laurentian University who does research on migration in Canada, finished the panelists’ presentations with a talk on the experience of migrant children and their parents in the face of the Child Welfare System in Canada. The lack of cultural sensitivity can lead to devastating consequences for refugee families in Canada.

After the panelists finished their talks, it was the audience’s turn. Members of the audience asked questions and we were able to go deeper into the root causes of forced displacement and the importance of welcoming and accompanying refugees when they do make it to Canada.

The next day, I facilitated the simulation exercise “A Journey into Exile”. Nineteen people participated and “became refugees” for 90 minutes. They experienced forced displacement and had to make decisions, sometimes quickly, that would have a lasting impact on their lives. After their 90-minute experience, we had a rich discussion on the reality of refugees’ lives, the difficulties they face daily, but also the resilience they have in the face of all that adversity.

I left Sudbury thinking: Mission accomplished. Many thanks to the organizers of this solidarity week, Father David Shulist, SJ and Lucien Pelletier, who put the time and energy required to make this a successful event. 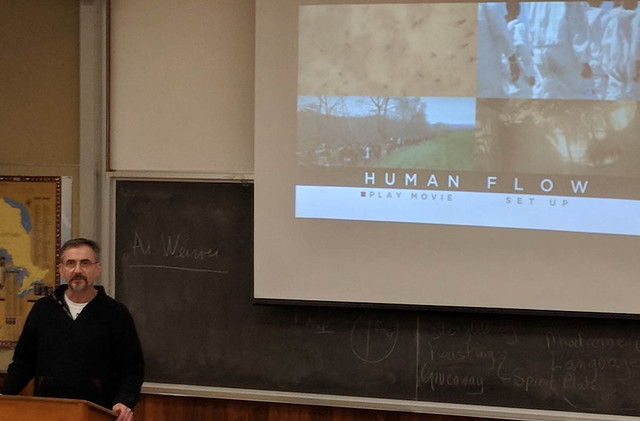 Recent News
Ecological research, working together towards international development, and spirituality apps: the latest issue of Canadian Jesuits
January 20, 2020 – “Dare to care,” encouraged Fr. Jim Lefebvre in an interview with the Canadian Jesuits magazine. This is also the central theme tying together the latest edition.
"To go far go together": Four final reflexions from the Social Justice and Ecology Secretariat Congress
January 10, 2020 – Last November the Social Justice and Ecology Secretariat in Rome marked its first fifty years with a Jubilee gathering. Dozens of global delegates came together for a week of celebration, networking and discernment.
Haiti, ten years after the earthquake: An interview with Jean-Denis Saint-Félix, SJ
January 10, 2020 – “I’m tired of only hearing about Haiti’s problems in the news. We have problems but we aren’t a problem.” That is the plea that the Superior of the Jesuits in Haiti, Jean-Denis Saint-Félix, SJ, makes on the 10th anniversary of the devastating earthquake that struck the country in January 2010.
Fr. Gábor Kiss
Father Gábor Kiss died at 11:30 am on December 23rd at René Goupil House in Pickering, Ontario (Canada). He was in his 96th year, and was in religious life for 74 years. His life of service can best be expressed by his usual reply: “I strive to do the best possible.”
Towards a greater engagement with our Common Home: An Interview with John McCarthy, S.J.
December 13, 2019 – Caring for our common home is one the new Universal Apostolic Preferences. How exactly do we go about doing this? Fr. John McCarthy's job is to encourage all Jesuits and their colleagues in the Province to imagine different ways of working towards this preference.
A more human Christmas: The cards by St. Bonaventure's College students [with photos]
December 20, 2019 – The Advent season is often filled with beautiful stories of solidarity. This year, one such story takes place at St. Bonaventure’s College in St. John’s Newfoundland, part of the Jesuit Schools Network.
History today: The Virgin of Loreto, a devotion that crosses oceans
December 13, 2019 – It was in the sanctuary of Loreto, Italy that, last March, Pope Francis dedicated all the vocations to the Virgin Mary and signed the apostolic exhortation written in response to the Synod on Young People, the Faith and Vocational Discernment.
view all news