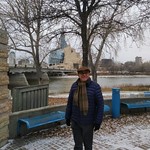 November 9, 2018 — The provincials main task is to visit every Jesuit in the country at least once a year along with most of our apostolates or works. I spent the past week in Winnipeg where I visited the Jesuit community and most of the Jesuit inspired works here. The newest work is Gonzaga Middle School, a school in the Nativity School tradition that provides an enhanced, holistic, co-educational, culturally sensitive middle school (grades 6-8) education for low-income families; in this case mainly First Nations.  Gonzaga is in its third year of operation and thus is preparing for its first graduating class!  There is a lot of excitement surrounding this upcoming watershed moment. 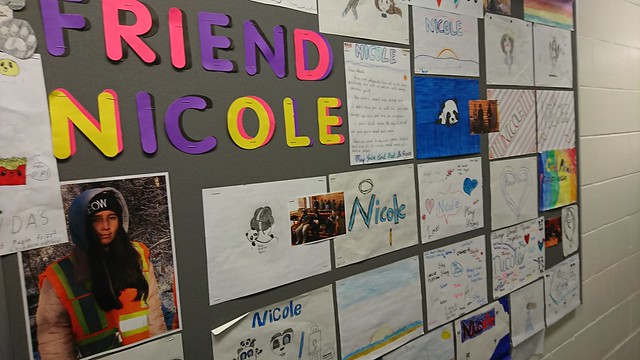 As well, the school is mourning the loss of one of its students Nicole, a grade 7 student, who died in a tragic house fire along with another family member two weeks ago.  I assured Tom Lussier that I and the province would pray for Nicole and her family.  May God give her repose and consolation to her family.

The artwork below is a prizewinning entry by Gonzaga Grade 7 students for the 2018 National Centre for Truth and Reconciliation’s “Imagine a Canada –through the Lens of Reconciliation” art and leadership program.

Do you want to learn more about vocations to the Society of Jesus? Visit www.BeAJuesuit.org for more information.

Recent News
Ecological research, working together towards international development, and spirituality apps: the latest issue of Canadian Jesuits
January 20, 2020 – “Dare to care,” encouraged Fr. Jim Lefebvre in an interview with the Canadian Jesuits magazine. This is also the central theme tying together the latest edition.
Haiti, ten years after the earthquake: An interview with Jean-Denis Saint-Félix, SJ
January 10, 2020 – “I’m tired of only hearing about Haiti’s problems in the news. We have problems but we aren’t a problem.” That is the plea that the Superior of the Jesuits in Haiti, Jean-Denis Saint-Félix, SJ, makes on the 10th anniversary of the devastating earthquake that struck the country in January 2010.
"To go far go together": Four final reflexions from the Social Justice and Ecology Secretariat Congress
January 10, 2020 – Last November the Social Justice and Ecology Secretariat in Rome marked its first fifty years with a Jubilee gathering. Dozens of global delegates came together for a week of celebration, networking and discernment.
Fr. Gábor Kiss
Father Gábor Kiss died at 11:30 am on December 23rd at René Goupil House in Pickering, Ontario (Canada). He was in his 96th year, and was in religious life for 74 years. His life of service can best be expressed by his usual reply: “I strive to do the best possible.”
Towards a greater engagement with our Common Home: An Interview with John McCarthy, S.J.
December 13, 2019 – Caring for our common home is one the new Universal Apostolic Preferences. How exactly do we go about doing this? Fr. John McCarthy's job is to encourage all Jesuits and their colleagues in the Province to imagine different ways of working towards this preference.
A more human Christmas: The cards by St. Bonaventure's College students [with photos]
December 20, 2019 – The Advent season is often filled with beautiful stories of solidarity. This year, one such story takes place at St. Bonaventure’s College in St. John’s Newfoundland, part of the Jesuit Schools Network.
History today: The Virgin of Loreto, a devotion that crosses oceans
December 13, 2019 – It was in the sanctuary of Loreto, Italy that, last March, Pope Francis dedicated all the vocations to the Virgin Mary and signed the apostolic exhortation written in response to the Synod on Young People, the Faith and Vocational Discernment.
view all news

Manresa Jesuit Renewal Centre
Since 1946, Manresa has welcomed retreatants to grow closer to God on 21 beautiful acres in ...